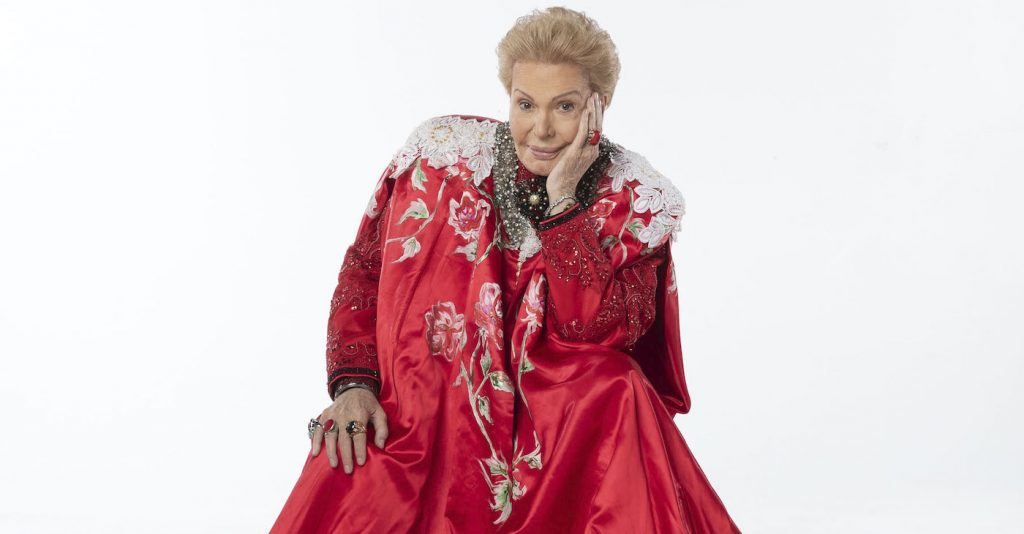 Described as equal parts Liberace, Norma Desmond, and Oprah, the wildly popular, gender-bending Puerto Rican TV astrologer Walter Mercado was so larger than life that only a documentary could do him justice. The filmmakers behind Netflix’s Mucho Mucho Amor: The Legend of Walter Mercado, like millions of Latinx viewers around the globe, grew up watching Mercado deliver daily horoscopes on TV. Wearing his trademark bejeweled capes, Mercado’s flamboyance coupled with upbeat astrological predictions helped make him a beloved cultural icon.

“I have this nostalgia for him like most Latinos,” says Cristina Costantini who co-directed the film with Kareem Tabsch. “I watched him every day on TV [in Milwaukee] with my grandmother who is from Argentina and speaks Spanish. For me, he was a Mr. Rogers or Oprah. I was taken aback by what he looked like. I didn’t speak Spanish well so I didn’t get all that he was saying but I knew he made people feel loved. He would come on and tell us that tomorrow would be a better day.”

Tabsch, who grew up in Miami, recalls being captivated by Mercado’s androgynous appearance and over the top style.

“As a young queer person, it was very impactful. I’d never seen someone who looked so different and fabulous; that sense of ‘otherness’ was something I saw reflected in myself. I was a more discount variety of fabulous but I recognized that Walter was different in the way I was different,” he says. “When you see someone who looks the way you feel, it is incredibly validating.”

Costantini had been pursuing a film about Mercado when she heard that Tabsch and producer Alex Fumero were also planning a documentary. So the three of them teamed up. They visited Mercado, who was by then living quietly in San Juan, Puerto Rico, over the course of what ended up being the last two years of his life. Mercado died last year at age 87 of multiple health issues shortly after the film was completed.

“At first, we thought the film would be a comeback but it ended up being a swan song,” says Costantini. She says the team had grown close to Mercado and his family by the end of production. “Kareem and Alex were pallbearers in his funeral. Walter was very dear to us. He was a childhood icon but he also became a member of our family,” she says.

Mercado was agreeable to allowing the crew into his life and home but it took them some time to earn his trust and allow for more intimacy.

Using rich archival images and footage, the film traces Mercado’s rise from small town in Puerto Rico to his success as a dancer and an actor on stage and in telenovelas. When a TV producer asked the camera-ready Mercado to read horoscopes on a Telemundo program, a star was born. Mercado got his own show in 1969 and it was a sensation, running for decades. His television and radio broadcasts at once point reached 120 million viewers around the world.

Much of the credit for Mercado’s fame goes to his former business manager, Bill Bakula, who is interviewed in the film. Their partnership ended in a bitter legal battle after Mercado signed over the rights to his name and likeness into perpetuity. As the court case dragged on, Mercado was unable to work under his own name. Although he ultimately won back the right to his name and his likeness, he’d lost years of work and had fallen from public attention.

The filmmakers credit producer Fumero with persuading Bakula to appear on camera to give his side of the story. Fumero, they said, was also responsible for delivering one of the documentary’s most memorable moments, when Hamilton creator and longtime Mercado fan Lin-Manuel Miranda, who was starring in Hamilton in Puerto Rico, visits his childhood idol.

“Lin said, ‘I’ve turned down all press requests but I couldn’t pass this up.’ He was like a giddy schoolboy,” says Tabsch.

In spite of the filmmakers’ passion and belief in Mercado’s enduring appeal, the film was far from an easy sell.

“We spent so long trying to convince people that this story was meaningful and had to be told,” say Costantini. “We had a lot of trouble finding the money. It was a hard film to raise money for because white executives had not grown up with him. It was a young Mexican executive who got it.”

She says the enthusiastic response to the release of Mucho Mucho Amor has been validating.  “Walter was trending on Twitter all day. There have been thousands upon thousands of messages especially from Latinos for whom this story means so much. It makes us feel that we were not crazy all those years we worked and made no money trying to put this together.”