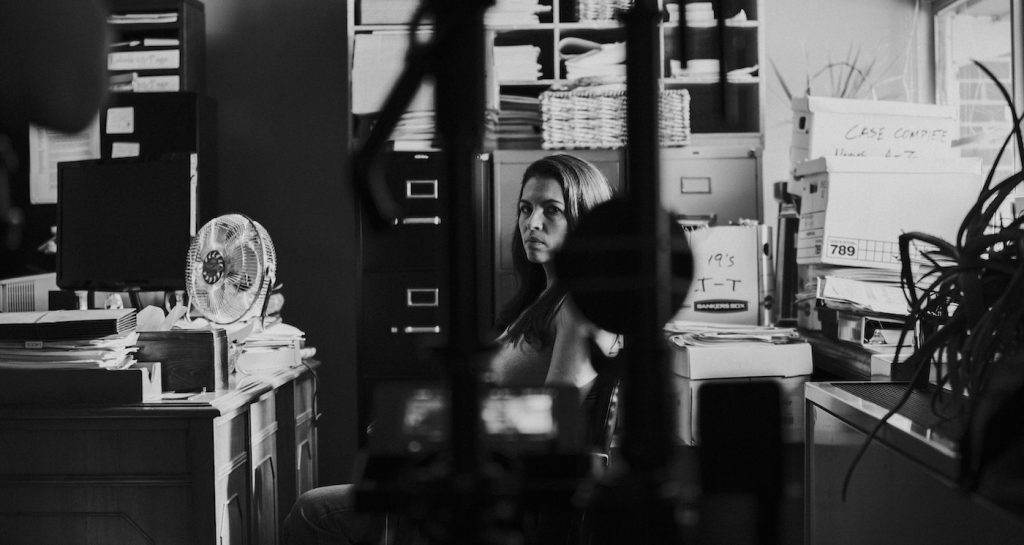 Just premiered on HBO, Long Gone By is the story of the hardworking single mother and undocumented immigrant Ana, played by Erica Mūnoz, who is trying to create the best life for her brainy teen daughter Izzy (Izzy Hau’ula) in their adoptive small town of Warsaw, Indiana. When a deportation order demands Ana return to Nicaragua, it puts not only her own future in jeopardy, it makes Izzy attending Indiana University nearly impossible. Because of her immigration status, she doesn’t qualify for scholarships or financial aid, and every avenue that Ana tries is blocked. For Ana, if she has to leave and live a lifetime without seeing her daughter, she must find a way to make Izzy’s dream come true, even if it means risking everything.

The Credits spoke to Mūnoz about being both the lead and associate producer on the project, working closely with director Andrew Morgan. “Andrew and my husband went to film school together, so we were all a very close-knit group of friends. He and his wife Emily have children, and actually she and I were pregnant at the same time. I’d been away from the business for some years, but was slowly coming back. Andrew and I had a really good rapport and are very similar. He had just premiered The True Cost, which is a documentary about fast fashion. He has a passion for putting a spotlight on untold stories, using his position of privilege to shine a light on important issues. He was working on this new documentary series on undocumented immigrants, and he asked me to produce it.”

They worked on several stories together, one on sanctuary churches, focusing on a mother who was being protected and housed in the church by the community to keep her from being deported, and another on a medical student who couldn’t get financial aid. Working on that together led to conversations about what choices people would make if they were backed into a corner. What might people do in the name of something really important, or for someone they love, even if it’s technically illegal?

Mūnoz says that, even at the beginning, Morgan wanted her to be part of it. “When The True Cost came out, he was meeting with some really well-known actors, and I really don’t take offense at the fact that I’m not a big name. Even though I’ve been in this business for a long time, there just haven’t been the roles for me or the opportunities. I don’t know why he was so committed to me, but he said he wanted to write the movie and put me in it. This is a couple of years ago, and he was already in the mind space of nothing about us without us. That was before the hashtag was popular, which is about telling our stories but keeping us involved. He said, ‘I want to tell the story, but I need you involved from the beginning in order to do it. It can’t just be my perspective, because this isn’t my story.’ So he just wrote the film, and insisted that I play the part.”

As an associate producer, Mūnoz always felt she was being heard, and that her ideas were not only considered, but often implemented. She points to several examples. “I was talking to Andrew about the fact that in the undocumented community, for a lot of people, there’s an element of invisibility. The feeling is, ‘I’m here, but nobody’s really seeing me’.” She goes on to say, “There are scenes where people have said to us that Ana would definitely be recognized or remembered. I know different. Not in this world. Not in this space. There are a lot of Latinx folks who are doing work, doing hard labor for a long time and are disappearing inside of communities. There’s another example, towards the end of the movie when Ana is talking to Izzy, and it’s the climax of the film. In the original version, Ana was breaking down in front of her daughter, and telling her how hard and awful it all is, and saying she doesn’t know how she’ll do it. I told Andrew I didn’t think a mother would ever do that. I think a mother wouldn’t want her daughter to feel the guilt of what she was going through. She would want to instill in her daughter that she could do anything. With my kids, I would be telling them, ‘You can do this. You can handle this’. I would hold everything else in until I was alone. Andrew and Emily both agreed.”

The film had its premiere at HBO’s New York Latino Film Festival, which is right down the street from where Mūnoz got her start, playing on Broadway in the famed musical Rent. “Long Gone By premiered in Times Square. It was a dream. I started my career in New York. I was like Mary Tyler Moore, with my suitcases in the middle of Times Square. Here I was again. It was through the festival that HBO stepped in. They started having conversations with Andrew. We knew about this a year ago, but we couldn’t really talk about it.” Mūnoz believes their commitment to this film, and this Latinx story, sets HBO apart. She explains, “All of us, I think, were waiting for it to not be real, because it was such a dream that HBO, with the platform it has, would invest in a film like this. It just says so much to me about how they’re putting their money where their mouth is. There are so many people making noise about needing more Latinx representation, and about needing more Latinx people in front of the camera, and yet the only films being looked at are if you have a star or a name. Here you have a major company saying they’ll give us that visibility, willing to shine a bright light on us. It was really just organic, and completely based on the merit of the film, which feels really good.”