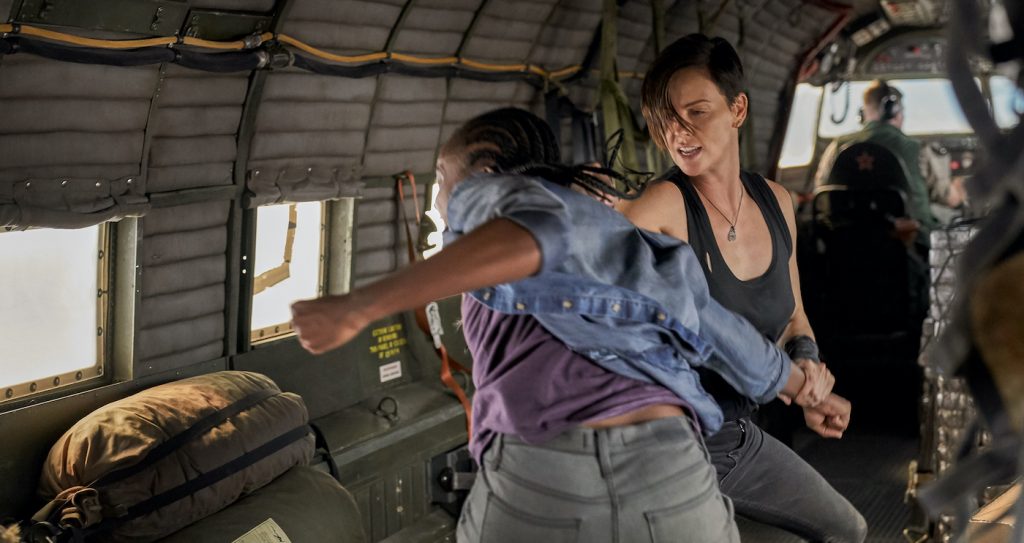 Years before Wonder Woman, Black Panther, and Captain Marvel came out, Charlize Theron set the bar for female action heroes in 2005 when she starred in the sci-fi bloodbath Æon Flux. She followed that with her incredible performance as Furiosa in Mad Max: Fury Road and then as a super-spy more than willing to fight in Atomic Blonde. Now Theron returns to the fray as immortal ax-wielder Andy in The Old Guard. Based on Greg Rucka’s graphic novel and directed with verve and nuance by Gina Prince-Bythewood, the Netflix movie follows Andy’s crew of un-killable superheroes as they fight off thugs dispatched by a sadistic scientist with help from rookie badass Nile, a back-from-the-dead Marine portrayed by KiKi Layne. The 28-year old actress made a striking film debut in If Beale Street Could Talk but had no fight experience before joining The Old Guard cast.

How did you train the inexperienced KiKi Layne to the point that she could hold her own opposite Charlize Theron?

Brycen: We set KiKi up with Duffy Gaver, a former Navy SEAL, and he did a lot of weight training. She also had a running coach. But I’ll turn it over to Danny because he developed the fight training for KiKi and Charlize.

Danny: First, we assessed KiKi and she definitely had athletic ability, so from there we worked on boxing and basic footwork for about two hours a day. Since KiKi’s character is a Marine, her fighting style is based on military mixed martial arts, MMA, which a lot of Marines practice.

Danny: KiKi didn’t know what she was getting into until Charlize came in like a friggin’ warrior, threw her bag down, kicked her shoes off, and said “What’s up motherf**kers, let’s train.” I was like, “Hell yeah” and KiKi stood there, eyes wide open, mesmerized. When she saw how hard we beat up on Charlize in her workouts, KiKi realized “Okay, this is what we’re supposed to be doing.” We taught KiKi how to throw punches at certain angles, how to fake reactions, how to punch somebody without hurting them.

In the movie’s first big showdown, KiKi attacks Charlize in an airplane. How did you prep the actors for that sequence?

That fight scene was filmed in London?

Brycen: On a soundstage. They got a real DC-9 and put it on a gimbal, so [KiKi and Charlize] reacted to this moving mechanism as if it were a flying plane. We put soft padding on the walls, foam padding on the floor, and did everything we could to make the environment as comfortable as possible. Then KiKi and Charlize went at it for 10 hours straight as Nile and Andy. We shot on big ALEXA 65 cameras, which take up a lot of space, but we got through it and made this sequence, which sets the tone for the rest of the movie. Andy sees that Nile really has the fight in her.

As Andy, Charlize shows off remarkably fluid moves when she swings the giant ax. What fight traditions did you draw on to in choreographing those moves?

Danny: For the ax scenes, we used medieval martial arts, called HEMA [Historic European Martial Arts]. I also took pieces from Aikido and from Kendo, the Japanese martial arts, and a little bit from wushu. Charlize’s character has been doing martial arts for 6,000 years so she’s trained in all these different disciplines. When Andy pulls the ax out and starts swinging it around—that’s a wushu move. She uses HEMA movements to stab the bad guys. Charlize comes in with a pistol, then throws away the guns and pulls out medieval weapons, and ends up attacking people with her labrys ax. We had this progression in the weaponry from modern to ancient, that’s what we were shooting for.

How much time did it take to teach Charlize the ax choreography?

Danny: Thousands and thousands of hours. Here’s the funny thing. When we started working with the ax, Charlize comes in and goes “Oh my god this is a little heavier than I expected.” I said, “Okay take it home.” So Charlize would just take the ax everywhere, walking around all day with the labrys. I love that Charlize has such a passion for the martial arts and the philosophy behind it. Training four hours every day, five days a week for four months, Charlize’s work ethic was infectious.

Brycen: Kali is a Pilipino martial art. That came into play with the hand to hand combat stuff. We used the pistol like a kali stick, to block and parry, much as we did in the John Wick movies.

Taking a step back, both of you started out as stunt performers. How did you break into the business?

Danny: From an early age, I’d see the Shaw Brothers martial arts movies and be like: “Who are these people that are getting their butts kicked and dying?” That took me onto the path of doing stunt work. In L.A. I taught Tae Kwon Do and delivered pizzas. I knew [stunt coordinator] J.J. Perry and he gave me my break.

Brycen: I went to Berkeley on a gymnastics scholarship, moved to Los Angeles, parked cars at the Beverly Hills Hotel, and bar-tended for two and a half years. I handed out 500 headshots to different stunt coordinators before I got my first break in Pearl Harbor. Being an acrobat, I was pretty good at getting blown through the air and they needed a lot of that in Pearl Harbor.

Danny: I blew my knee out, blew my shoulder out, been knocked out a couple of times. It comes with the territory.

Brycen: Lots of stitches. Any time you go through a window, even though it’s tempered glass, you still get cut. You know that’s probably going to happen, going in, but we didn’t get all dressed up for nothing.

Being such active guys, has it been tough to sit still during the Pandemic? How are you coping?

Danny: I hang out with my family, and I’m partners in a martial arts school so I go down there and hit the bag. It’ll be interesting to see how things play out with fight choreography, where we have to interact with people. With the precautions, the masks, the whole thing, I think it’s achievable. And hopefully, the virus will turn away soon.

Brycen: I’ve got a wife and two little girls so I’ll take my eleven-year-old surfing. I built a little gym in the house above my garage. I spend 1100 calories a day punching my heavy bag and doing Danny’s Zoom workout. I still get to work out with those guys, only now I do it via my iPad.