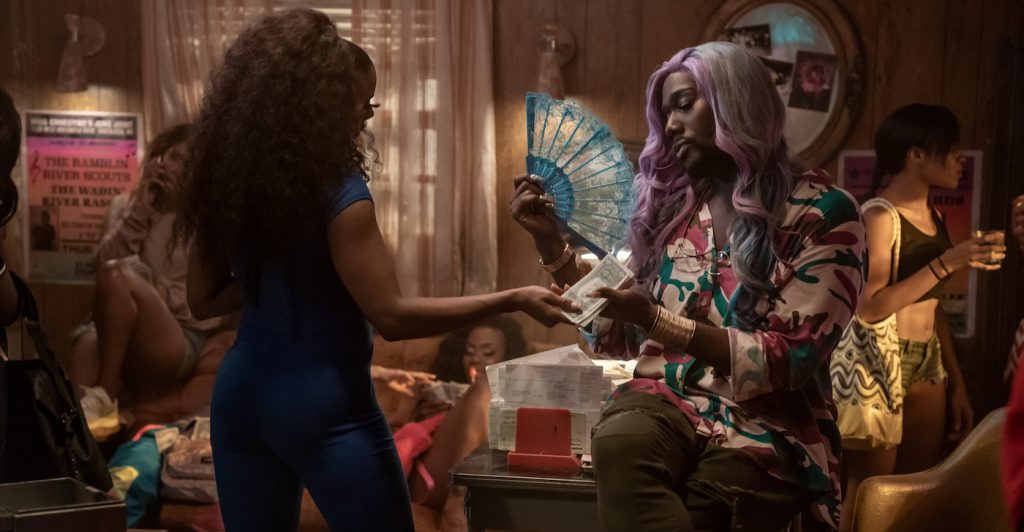 If you think you’re in for a sexy, easygoing watch with P-Valley, Starz’s new series on the life and times of the employees of a Mississippi Delta strip club, expect an emotional awakening. The show’s creator, Laurence Olivier Award-winning playwright Katori Hall, first brought P-Valley to life as a critically well-received play, “Pussy Valley.” Hall’s television adaptation may be less explicitly titled, but it retains the nuance of a work fit for the stage, offering resonant explorations of community, religion, and sexuality from the venue of a ramshackle club and its rural surroundings.

Drive-by exterior shots aside, the vast majority of the show was shot on stages in Tyler Perry’s Atlanta studio, or on location further into the Georgia countryside. It’s at the Pynk, a strip club owned by gender-fluid Uncle Clifford (Nicco Annan), where women like Mercedes (Brandee Evans) and Hailey (Elarica Johnson) seek an escape or an audience, but above all, a decent income. The club’s humble atmosphere belies its status as a local social hub. “Her grandmother had owned a juke joint,” explains Nancy Schreiber, the show’s cinematographer along with Richard J. Vialet, of Uncle Clifford’s business, built on sound stages for reasons of space and structural integrity (P-Valley is never voyeuristic, but the pole dancing is real.) “The town is a bit depressed, and there would be no way that Uncle Clifford would have had a slick, glitzy club. It was important to Katori that the elements be not too high end.”

To strike the right look, Schreiber and Vialet relied on remote-controlled lighting, detuned, uncoated Panavision lenses, and shooting at 1600ISO, “even though Alexa minis are supposedly 800. We wanted to push a little bit of noise into the signal. As it turned out, we had to add some grain, because it just wasn’t quite gritty enough,” said Schreiber.

Brought together by work or leisure at the Pynk, P-Valley’s protagonists pursue diverse ends. Facing mounting bills, Uncle Clifford is just trying to stay open. Leader of the pack Mercedes is ready to get out of the business, with a religious zealot mother as the biggest obstacle to her career transition. Hailey, the show’s star and the club’s new girl, is reeling from an abusive relationship, hinted at in atmospheric, nightmarish flashbacks. The camera and lighting work supports the characters’ arcs and digs into a heady Southern atmosphere by creating a sense of physical closeness, particularly to the women working at the club.

“It was really a pleasure to be working on a series that cared about the visuals,” said Schreiber, who pointed out that care was taken to preserve rather than erase the inherent glow of Black skin tones. “We had a lot of discussions about not over or under lighting, and lighting natural shine on Black skin. Often, in television and movies, makeup people want to powder down all the sheen and shine that happens on people’s skin tones, and that’s antithetical to how Black skin should be seen. Also, it was the hot South—people would be sweating. That allowed nuance in skin tone to come out.”

The show offsets footage of strippers in action with a total lack of voyeurism, with a major contributing factor, Schreiber expressed during our phone conversation, is the diversity of the crew. All of the season’s eight directors were women, as were more than half the DP’s camera ranks. Nudity at the Pynk is real and necessary to the show, but it comes off as ancillary to both the characters’ stories and their athleticism. “We were very careful to show the strength these women had—that they’re proud of their bodies and their skill as dancers,” the DP explained. There are moments that the excitement of P-Valley’s more raucous scenes border on nerve-wracking—will that pole really hold three dancers at once?—but the emotional resonance of more pressing concerns, like the manipulative machinations of Mercedes’ mother, or what really happened to Hailey, always take precedence.

“We were careful not to linger, feeling that was gratuitous sexual imagery that was not necessary,” said Schreiber. “We wanted it to be real. Yes, there was some toplessness at the club. But let’s not dwell on it. Let’s show it matter-of-factly.” The stylistic choice makes the most possible sense, exactly mirroring back the prevailing sentiment of the hard-working women of P-Valley.