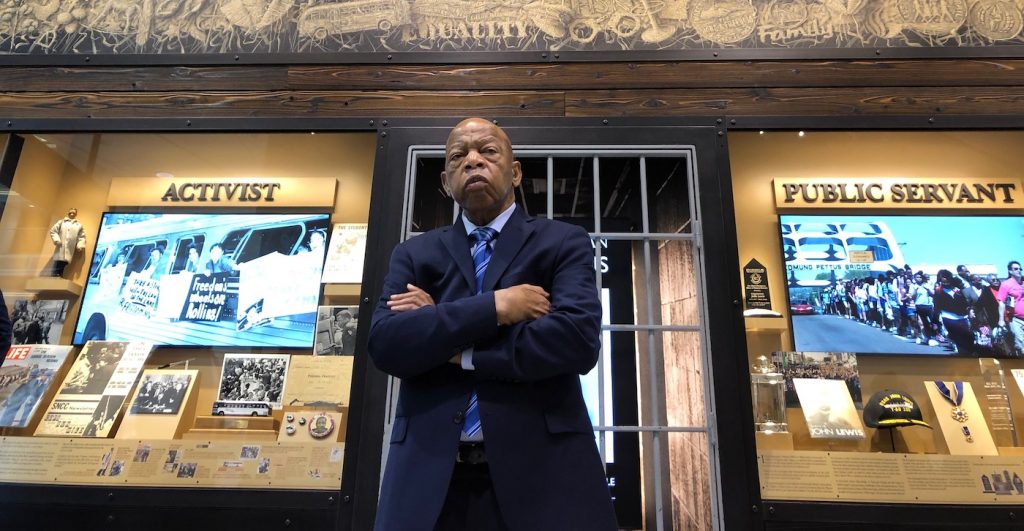 Director/producer Dawn Porter’s documentary John Lewis: Good Trouble is an inspirational look at the life and career of the legendary Georgia Democratic representative and civil rights activist John Lewis. Congressman Lewis, now 80 years old, has been instrumental in creating foundational change in the United States, from voting rights to equal rights for all Americans. To this day, he continues to be a voice for positive change.

The Credits spoke to Porter about the film, and why John Lewis is a man who represents the very best of what this country can be. The film is available for digital download now.

You followed Congressman Lewis for a year. There must have been a lot of footage. How did you carve out the story we ultimately see as viewers?

Having an abundance of footage is usually the case, but that’s true even more so the case with a person like John Lewis, who has led such a long, productive, and public life. With any film, my goal is to ask, ‘What is the animating question of this story?’ For Congressman Lewis, I was interested in who he is today, and how his past has shaped his present. I was also interested in making the point that, while we all know that John Lewis is brave, because of the iconic, inspiring footage that we’ve all seen, I’d like to also point out that he is strategic.

How did you set about making that point?

I included things like the training videos of those students. They weren’t only brave, they were calculated, concentrated, and committed to making a lasting change. Those protests did not just spring up overnight, they were planned really intentionally. That’s why John Lewis has such a long, rich legacy. I very much agree with President Obama’s recent comment that it’s not only politics or only protest, we need both. We need people to identify issues, and then we need people rolling up their sleeves and solving those issues. The animating question for a John Lewis film is, ‘How do you make a great leader? What were some of the formative moments for him that we see playing out today?’ As a young man, he was speaking out to authority. As a congressman, he’s still doing the same thing. There’s a reason why Nancy Pelosi calls him ‘The Conscience of the Congress.’ There’s a reason why she and so many others were happy to make time to talk about his importance in Congress. I hope that comes through in the film.

John Lewis was integral to the Voting Rights Act, but much has changed recently in terms of voter access and he’s still at it. His lasting tenacity feels like a very crucial thread.

That was a goal with the film. People who know Congressman Lewis know that he was a historic Civil Rights activist when he was young, but that has continued today. He did a sit-in for gun violence. In every conversation he has, he always talks about rights for LGBTQ citizens. He was co-sponsor of the Violence Against Women Act. His advocacy is on behalf of the human race. The conversation we’re having right now, this false dichotomy between Black Lives Matter and All Lives Matter, that’s a false construct, and Congressman Lewis points us to the fact that we are all one family, the human family, which does not mean you don’t see differences, it means that you don’t discriminate against people because of those differences. You protect people for their whole selves, whichever particular identity group they prefer to be associated with.

The film really highlights the balance of his fearlessness and hopefulness. What is your experience of that, having gotten to know him?

I’ve been thinking about that a lot. I’ve spent a year filming him, traveling with him, and hearing him talking to people. A lot of what documentarians also do is listen. You start to hear certain themes. That’s how you figure out what’s important to him. One of the most important things he said was about how he was living a fearless life. That fearlessness is not just confronting bayonets and billy clubs, it’s also a fearlessness about speaking truth to power. I think about that a lot in my own life. All of us can think about that. I don’t have to have a podium or a platform to speak uncomfortable truths. I’m thinking about how I can live fearlessly. How do I call out people when they say something that’s racist or offensive. How do I not become part of the problem? If we are silent, we become complicit. That’s one of the most important components of John Lewis’s fearlessness: it’s the fearlessness to say what you believe.

What do you see as John Lewis’s America?

I see his America so clearly. It is an America that has respect for human life, a country of compassion and empathy, where there’s intelligent, thoughtful leadership, but also where there is art, music, and family. It is not an America without problems, but it is one that is always trying to be better. It is trying to look for ways of getting closer to that beloved community. That is his objective. When so many of us are casting about, and looking for a hopeful sign or hopeful circumstance, understanding John Lewis’s life and what he stands for, and still today optimistically believes, I think it’s reflective of the better part of America, and an America that he is absolutely positive exists. He would love for people to amplify that better nature of America, rather than the darker side, which is so often focused on today.