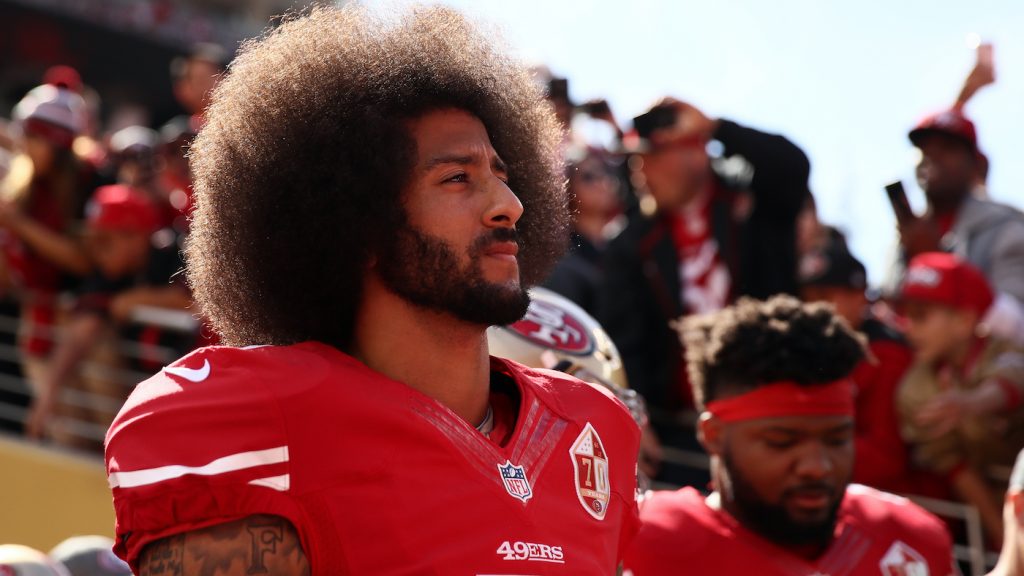 If you were to name the most influential athletes of the last decade, Colin Kaepernick must be on your list. The former San Francisco 49ers quarterback has become one of the most crucial voices in America demanding and working towards social justice. He started this journey in the public eye with a simple gesture and, perhaps more importantly, a sustained commitment thereafter in the face of injustice against himself personally. Colin Kaepernick became a known quantity to NFL fans in 2012, but he became a household name all throughout the country for what he’s done on and off the field since 2016.

You probably know the rough outline of his story, but a quick refresher is in order to grasp just how strange a ride Kaepernick has had in the past 9 years. He was drafted by the San Francisco 49ers in 2011 to be the backup quarterback to their franchise star Alex Smith. Kaepernick ultimately became the Niners starting quarterback in 2012 after Smith suffered a concussion, and led them to their first Super Bowl appearance since 1994. The next season, Kaepernick was the 49ers full-time starter, and he led them to the NFC Championship Game. He had his ups and downs following 2013, but he was a potentially great QB with the skills to lead a team to the big game.

Then came 2016, when Kaepernick’s life would change dramatically. He was looking for a way to respectfully protest what he saw going on in America, so in the 49ers’ third preseason game in 2016, Kaepernick sat during the national anthem prior to the game, a quiet but clear protest against racial injustice, police brutality, and systematic racism. After this, Kaepernick was advised by the former Seahawks player and a former U.S. Army Green Beret Nate Boyer that the most respectful way to protest was to kneel rather than sit. So, the next week and throughout the entire season, Kaepernick kneeled during the anthem, and this simple, clear gesture sparked a wider protest movement across the league. Kaepernick had his supporters and his detractors in the league and at large. A fellow QB and one of the NFL’s biggest stars, New Orleans Saints QB Dree Brees, was not a fan of his “method.” All of this came to a head in September 2017, when President Trump took the stage at a rally for Alabama Republican Senate candidate Luther Strange and told the crowd, and the world at large, that NFL owners should fire any player who kneels during the anthem. “Get that son of a bitch off the field right now,” Trump gloated, adding, “he’s fired. He’s fired!” The crowd cheered.

Kaepernick became a free agent after the 2017 season. He was never picked up by another team again. For those who don’t follow the sport, Kaepernick’s inability to find a home in the NFL made zero sense unless you accepted the truth right before your eyes; he was being punished for peacefully protesting. The stat wonks and quants at the website FiveThirtyEight wrote that “it’s obvious Kaepernick is being frozen out for his political opinions.” Adding that “no above-average quarterback [measured by the total quarterback rating] has been unemployed nearly as long as Kaepernick this offseason.”

If Donald Trump and the NFL were trying to silence Kaepernick and dilute his power by keeping him off the field, they significantly miscalculated the man and the country’s mood. He has become one of the most visible, tireless advocates for reform, donating his time and money towards social justice causes. He co-founded the Know Your Rights Camp, which this year launched a relief fund for individuals impacted by the COVID-19 pandemic (to which Kaepernick donated $100,000.) The Colin Kaepernick Foundation connects all his work for social justice, cementing him as one of the most visible, influential activists working in America.

Which brings us to the news that Kaepernick has signed a first-look deal with Disney via his Ra Vision Media company, which will produce “scripted and unscripted stories that explore race, social injustice and the quest for equity, and will provide a new platform to showcase the work of Black and Brown directors and producers.” The first thing we’ll see from this deal is an ESPN documentary that will track Kaepernick’s journey. We already know how good those ESPN docs are—giving Kaepernick the same detailed treatment they’ve recently given Bruce Lee and Michael Jordan and the Chicago Bulls is a great opening project. Yet that’s but the start of the scope of Kaepernick’s deal; he will help produce projects across all of Disney’s platforms, including Walt Disney Television, HULU, Pixar, ESPN, and ESPN’s The Undefeated.

“I am excited to announce this historic partnership with Disney across all of its platforms to elevate Black and Brown directors, creators, storytellers, and producers, and to inspire the youth with compelling and authentic perspectives,” said Kaepernick in a statement. “I look forward to sharing the docuseries on my life story, in addition to many other culturally impactful projects we are developing.”

“During this unprecedented time, The Walt Disney Company remains committed to creating diverse and inclusive content that resonates and matters,” said Bob Iger, Disney’s executive chairman. “Colin’s experience gives him a unique perspective on the intersection of sports, culture, and race, which will undoubtedly create compelling stories that will educate, enlighten and entertain, and we look forward to working with him on this important collaboration.”

The NFL might have frozen Kaepernick out of the league in his prime, but all they’ve done is help make him an icon, a man who gave up his career to speak truth to power and will continue to do so on the largest platform possible.

Featured image: SANTA CLARA, CA – OCTOBER 23: Colin Kaepernick #7 of the San Francisco 49ers walks in to the stadium prior to their NFL game against the Tampa Bay Buccaneers at Levi’s Stadium on October 23, 2016 in Santa Clara, California. (Photo by Ezra Shaw/Getty Images)