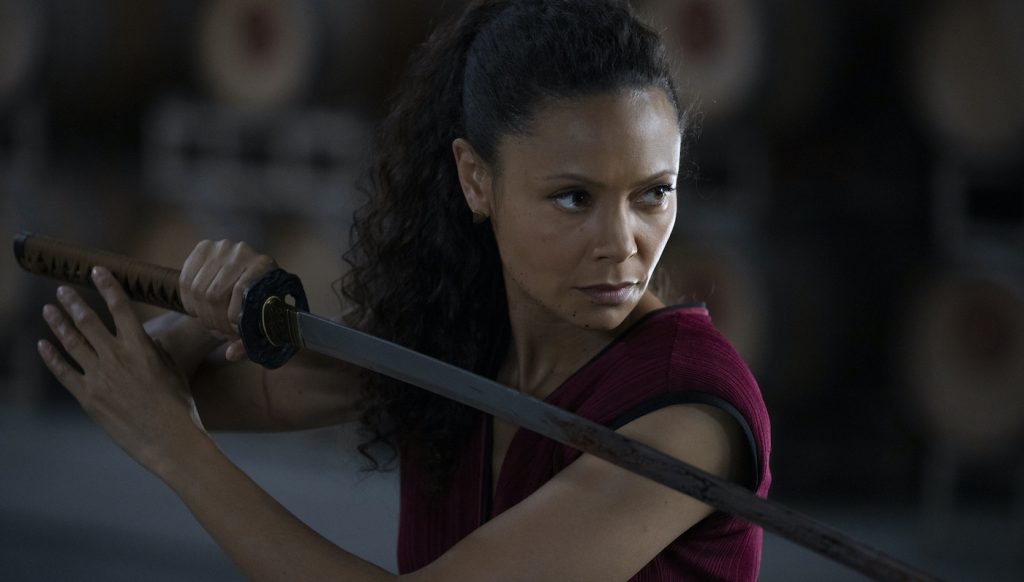 Right before lockdown and social distancing began in earnest, we had a chance to talk with notable cinematographer Paul Cameron about his return to Westworld, for which he not only shot the pilot but returned to film the just-concluded season’s opening episode and to direct the fourth.

He kept singing the praises of John Grillo, his cinematographer for that fourth installment, “The Mother of Exiles,” replete with action-strewn set pieces, some mid-season character arc payoffs, and scenery from around the globe, as locations from Spain to Singapore were spliced together, along with Los Angeles itself, to make a near-future version of the City of Angels.

Grillo reckons he’s shot more Westworld installments than anyone else, and Cameron trusted his former camera assistant—they had both worked for director Michael Mann back in the day—to the degree that his approach as director was “to kind of allow John to voice his vision of blocking, lighting.”

Which was good, since Grillo, singing the praises of Cameron right back, had himself directed several episodes in the third season of the series Preacher, on which he’d earlier been DP.  Grillo somewhat bemusedly calls Preacher his first “case” of directing, as if one wants to be careful whether to fall into it or not, and says “it was nerve-wracking; all the meetings you have to take, all the decisions you have to make. I had a newfound respect for the director’s job.”

As for working with Cameron on Westworld, “we knew the show, and yes, there’s definitely a gigantic shorthand that happens between him and myself.” Part of that occurred in the office where the show’s DPs work, often the current and incoming cinematographer overlapping. In this case, when Cameron and Grillo shared the space, each “basically facing each other, and working on our things,” when it came to the episode they’d be collaborating on, “it was easier to communicate, he would just say a few words and reference something, and I knew exactly what he was talking about, and how we could accomplish it.”

Surprisingly, one of the things Grillo had already accomplished by then was shooting the first full season of the new TNT show Snowpiercer, which was completed at end of 2018. Even though that first season is unspooling now, in this locked-down May, it had already been renewed, and the second season was almost wrapped, just ahead of the virus. “We almost finished it, before we got shut down at the end of March,” he notes.

Grillo lives in Seattle, and it was his northwest locale that further drew him to the project, which he called “perfect for me, about a two-hour drive,” to the production’s Canadian soundstages.

But it wasn’t only the easy commute that drew him to this alternate apocalypse, separate from what he’d shot with Westworld’s robot rebellions. It was the train.

Or rather, it was the world found inside the train. For those unfamiliar with the premise, Snowpiercer is derived from a 70’s-era graphic novel later turned into a science-fiction thriller by Academy Award-winning director Bong Joon Ho.

It’s like Noah’s Ark on rails.  The only surviving humans, after an experimental attempt to reign in climate change spectacularly backfires, are on the train, all 1001 cars of it. A perpetual motion machine, it must always keep going. But so too do the class divisions, emphasized by “Director Bong,” as he’s known in Korea, in his film version. The impoverished “tailies’ live in near-starvation in the last few cars, contrasted with the idle, and wee bit sociopathic, elites in the train’s “first-class” section upfront.

As a producer on the series, Bong oversees an adaptation that has also grafted a police procedural to its survival-themed setup, with Tony-award winning Hamilton alum Daveed Diggs playing a former homicide detective who is provisionally sprung from the tail—as a revolution is brewing—to help find whoever dismembered a corpse that was left all-too-close to the tonier cars.

Both apocalypses, snowbound and robotic,  share the presence of actor Ed Harris (who was in the Snowpiercer film), who Grillo describes as “very intense,” and always coming to the set in character, Westworld’s Man in Black included.

Grillo has his own way of coming to the set, after a lot of prep and research on the kinds of moods and visual textures he wants to bring to the filming.

Snowpiecer has a number of different themed cars; jails, schools, third and second classes, and a Cabaret-like cabaret car, for which he referenced a lot of “Art Deco paintings, with the pastel colors, and the lines,” which also influenced how he shot and lit the first-class sequences since “they also always dealt with high society.”

As for more overarching themes, he looked at Goya’s decidedly non-Deco “black paintings,” reflecting not only the artist’s bleak view of humanity as he worked mostly in murals on the walls of his house outside Madrid but because they were “very stark, very textured, with a very limited palette” with a kind of darkness they wanted to bring to Snowpiercer.

In Grillo’s case, however, his “brush” was a Sony VENICE camera, at least in the second season. The first batch of episodes was done with an early RED Epic Dragon, but he’d discovered the VENICE when Cameron brought it in for Westworld, and Grillo found his VFX supervisor on Snowpiercer also wanted the Sony for easier digit-wrangling in post.

The irony of discovering the latter camera on Westworld is that Cameron, and the producers, were adamant about keeping it a “filmed” show, the way he shot the pilot, so the VENICE was used sparingly, mostly to emphasize city exteriors at night.

And for Grillo, some of whose first DP experiences were at the frontier of the current digital age, shooting episodes of Mann’s HBO series Luck on one of the earliest ALEXAs, he’s been surprised to find himself still working in film. “I grew up loading mags, shooting film, and  I thought sadly, that’s not going to happen again. And then Westworld came up!” And, he says, he had to “switch his brain back over,” to film, for the show.

He’ll be switching for awhile: Westworld’s been renewed for a fourth season, and there’s the end of Snowpiercer’s second season to finish. We’re all having a challenging time living through a single apocalypse. Just try capturing two of them.