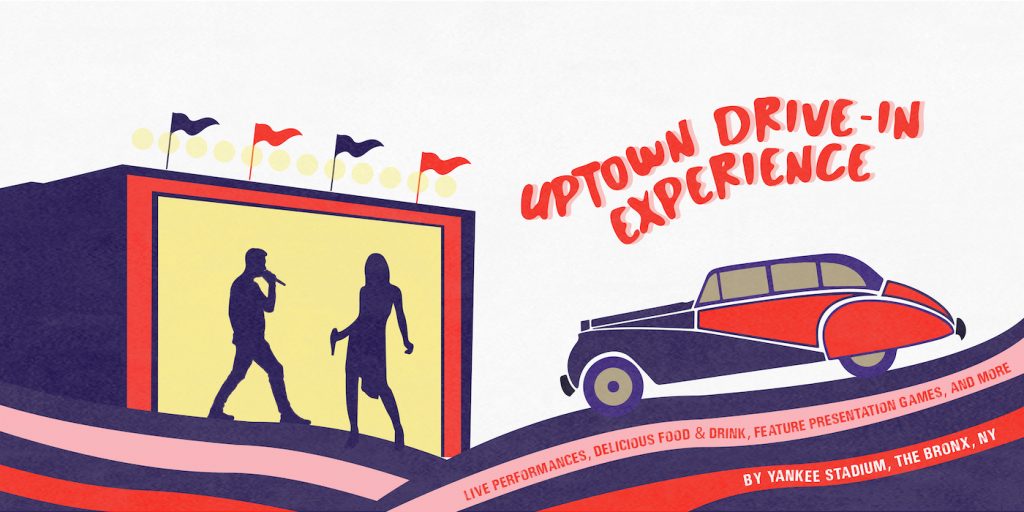 We don’t know when, or even if, the 2020 major league baseball season will happen this year, threatening to leave the beloved Yankee Stadium eerily quiet this summer. Luckily for Bronx residents, MASC Hospitality Group decided to tap into their enterprising New York spirit and bring the borough the block party of a lifetime.

The food-focused event company specializes in food and beverage gatherings like the Bronx Night Market and Bronx Beer Festival. When the spread of COVID-19 began closing the country in mid-March, they were suddenly canceling events that had been planned since October. Rather than fold, they began reinventing. “We won’t be able to do 500 people at an event anymore, but what if that 500 people were 500 cars?” MASC Hospitality partner Marco Shalma wondered.

With people unable to gather, event planning has been hit particularly hard. “We just wanted to let the world know we were looking and give people something to look forward to,” Shalma said. “We wanted to be innovating in a time when innovation has completely stopped and pushing the envelope in a time where it’s almost hard to keep going.” From that brainstorm, the Uptown Drive-In Experience was born.

The term “drive-in” typically connotes a movie screening, but demand quickly drove the idea into something larger. Within days of announcing their plans, more than 20,000 people joined a waitlist to be notified when tickets would go on sale. With such outstanding demand, Shalma and his colleagues soon envisioned a full evening of entertainment.

Shalma described an experience vastly different than a typical indoor movie theater. Each car will receive a “small platter” of food from vendors who have a relationship with MASC Hospitality. Background music will give way to short performances from musicians or standup comics. In the great tradition of drive-in movies, Shalma also has a pre-show audience participation element in mind. “Maybe a game presentation or karaoke where 200 cars are singing. I was thinking about playing New York, New York. I’m just visualizing that,” he said dreamily.

As for the feature presentation, Shalma is hoping to screen New York-themed flicks like A Bronx Tale, Mean Streets, or King of New York. “Some classic, old school New York movies,” he added. “Sometimes we’ll do short films based in New York or the state.” Shedding a light on local short films would be a warm tribute to a state that has always been a leader in film production and devastated by COVID this year. In 2018, New York’s film production created over 105,000 jobs and contributed more than $12 billion in wages to the economy.

As for the iconic location, MASC Hospitality had previously booked a parking lot outside the Yankee Stadium to host the Bronx Beer Festival. It will now host the drive-in movie event. As a normal parking lot, the space can hold 700 cars. Shalma said they would limit entrance to 200 cars and space them each 10 feet apart to guarantee proper COVID precautions.

The ambitious project has garnered an overwhelming response. The concept is unlike anything MASC Hospitality Group has previously tackled, but to that end, Shalma has an entirely New York attitude. “For us, throughout the years, we haven’t done anything until we’ve done it. You don’t know how to do something and then you go and do it and now you know how to do it.”

If you’re within driving distance of Yankee Stadium and want to join the thousands of interested moviegoers, you can subscribe now. MASC Hospitality announced that discounted early bird tickets will go on sale Sunday morning, May 31. However, there may be a chance to get a jump on sales if you’ve been on the frontlines of the pandemic. Shalma says priority parking and free tickets will be reserved for first responders. Good news for the general public, however. Ticket prices will be all-inclusive and depending on your carload, will likely cost less than an average indoor theater. That’s the drive-in benefit of pay-by-car over individual ticketing.

Adapting to this uncertain era is difficult, but communities pulling together are allowing for magic moments where people can find ways to gather and enjoy movies together. “There are a lot more people willing to contribute right now and be involved and volunteer,” Shalma said gratefully. “So we can give back and share something with the community and really put smiles on people’s faces.”