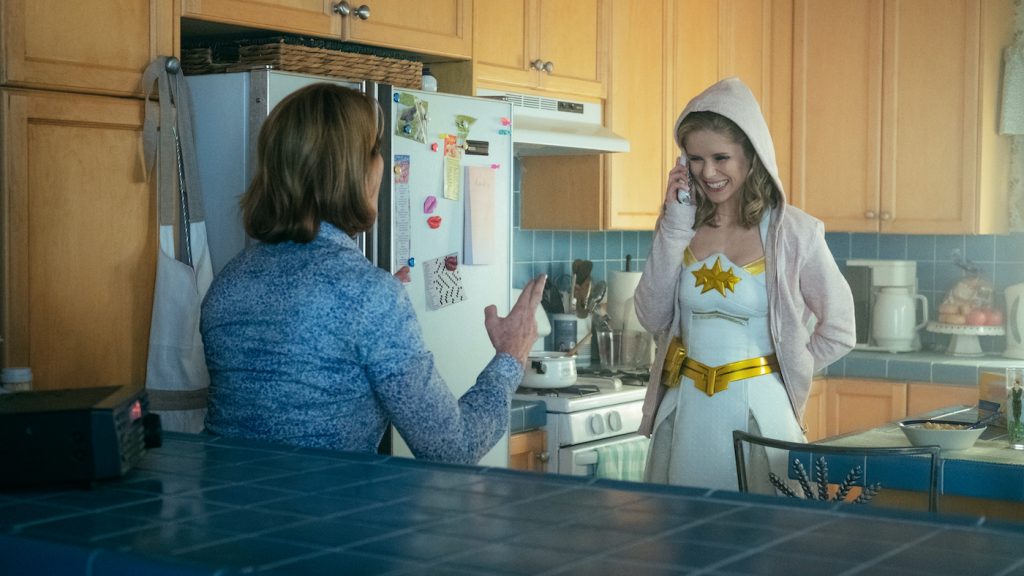 A comic book artist has the luxury of creating superhero costumes that have to meet just one standard—looking cool. But when it comes time to translate those looks to screen, the costume designer has challenges that require more than imagination and a pencil.  Superhero costumes worn by actors have to look real, even in hi-def. They have to withstand action scenes and they inevitably have to be cleaned and repaired afterward. But they can’t appear too brand-new; often they have to look just enough worn to seem as though they exist in the real world. The costumes often require complicated construction involving everything from hand-sewing to 3D printing.

For The Boys, with its second season coming this year to Amazon Prime, costume designers Carrie Grace and Laura Jean Shannon had an additional challenge they had not faced before. The “heroes” in this story are a kind of alternate version of the Justice League, known as The Seven, with equivalents of iconic superheroes like Superman, Aquaman, the Flash, and Supergirl. But in this world, they are arrogant, entitled, corporate, and careless, and it is the scruffy, bad attitude lesser-powered group known as “The Boys” who are the good guys. So, Grace and Shannon had to not only figure out a way to make the iconic looks in the comic come to life, they had to make them tell that complex, multi-layered story about heroes and anti-heroes.

In part one of their interview with The Credits, Grace and Shannon talk about constructing the look for the only member of the Seven who actually qualifies as wholesome—Starlight, played by Erin Moriarty, and how her look was shaped both behind-the-scenes and in the actual show.

There’s a character in the show who’s almost a stand-in for you both, Isadora (played by Débora Demestre), who designs superhero costumes. She meets with Starlight to re-do her look and show a lot more skin. That shows that the series really acknowledges the importance of presentation and iconography. How does her judgment reflect your judgment, and what about her character seems real to you as a costume designer?

Carrie Grace: When this project happened, it was right on the cusp of MeToo, when we were getting greenlit. What we’ve done with the series is we’ve taken some of the aspects of the original story and brought them to light in a way that really does show the woman’s struggle in the workplace. A lot of times as a costume designer, you are promoting a fantasy, as well as a reality. I think it’s really interesting, watching that scene, it’s the two men sitting on the couch who are selling the story, selling the pitch to Starlight. Telling her how this is the development of her character, and how she’s owning her sexuality and stepping out, showing any skin that she wants and everything. It is a costume that the character wears in the comic book. It’s a variation because what the comic book character wore when she wore the sexy outfit was kind of impossible to actually create.

It’s the most interesting scene, where they’re trying to sell her on her new reality, which involves her sexuality, and I love that Erin Moriarty’s character just is like: “That is not me.” But also, it acknowledges that the Isadora character has to be selling something. She believes in it because that’s the status quo, that’s the way things have always been. I don’t know if that’s the same answer I would have had before MeToo. It’s just interesting that there’s this narrative that’s been fed to women about what they should wear and why, whether it’s to be more aesthetically sexual or whether it’s to cover up. A lot of times, it’s everyone else who’s trying to tell a woman how to dress, other than the woman who’s actually in her own skin and knows herself better than these other people.  I appreciate that they’re still really highlighting the fact that the way we present ourselves is so important to the world, and that’s exactly what costumes are. We wear costumes every day of our lives.

Laura Jean Shannon: That’s an interesting one to bring up, and of course that was definitely a conversation that was very integral to my role on the show. Starlight started out very wholesome and pure. The first scene that we shot of the entire show, in the pilot episode, is where she goes for her Seven casting call. Erin is such a great actress, and I had chills watching it. They ask her questions, and it’s sort of almost like watching a Miss America pageant. But she was very heartfelt and grounded in this authenticity that she wanted to use her superpowers for good, to make the world a better place, to champion the underprivileged, and to truly be what we all have been raised to think of superheroes as representing.

And when you designed Starlight’s look, her original costume is very wholesome.

Laura Jean Shannon: When we were designing what we call her Starlight classic look, we had to really delve into the head of the character and figure out how to create something that was a classic superhero suit, that had a wholesome bent to it, where she could still be a badass, but also that she came from middle America and didn’t necessarily have the budget that they have at Vought International to create these highly technologically advanced superhero suits.

We really focused on having there be some fabrics that you could literally buy at Jo-Ann’s, combined with some fabrics that were very much part and parcel with the fabrics that we used for the Seven that were high-density screen printed and had various different unconventional methodologies. By doing that, we had this hybrid look for her, that she could roll with the Seven, but that there was definitely a little bit of a wholesome vibe. The audience is made to think: great, this is cool, they’re embracing who she is and that’s going to be such a nice way to appeal to the wholesome folks in the world. And then comes that scene, where they unveil Starlight 2.0, we call it.

This makeover is a storyline that they did actually take from the books. I think that Eric Kripke is a genius in terms of knowing just how much of the DNA from the source material to infuse into the storyline for the fans to grasp onto, but then also knowing how to ground it in reality, update it, spin it, twist it, and then bring it into this modern lens. So, he did take the thread from the books, where they push her, after some pretty horrific hazing, into the Seven. And they force her into this new—for her, grotesque—look. They unveil this Starlight 2.0, and she says “I just can’t wear it,” and they figure out a way to actually convince her that not only can she, but she must. So, it’s this really sad moment where Starlight, in all her wholesome goodness, sort of gets the memo that the Seven really isn’t about what she thought they were about. That it’s really monetized, big business, corporate, presentational. It’s like: we want that wholesome superhero to look like every guy in America wants to take her to bed. She ends up having to wear it for a while and making the best of it. It’s another example of the brilliant writing on this show.

You have worked on lots of superheroes. What makes The Boys special?

Laura Jean Shannon: What I loved about The Boys from the very get-go was that it was very important to Eric Kripke and our other executive producers Seth Rogen and Evan Goldberg, that we create a very legitimate superhero universe, much like ones that I’ve worked on in the Marvel and DC cinematic universes. We’re creating our own Vought cinematic universe with our suits, and yet it’s also this really interesting social commentary that I think is very poignant for the moment in time that we happen to be residing in as a nation and the world. Really looking at how superheroes can be politically and financially motivated, and this kind of underlying fascism that can sprout in a world whose priorities are not always on track with right and wrong. It’s a very unique take on your classic superhero.