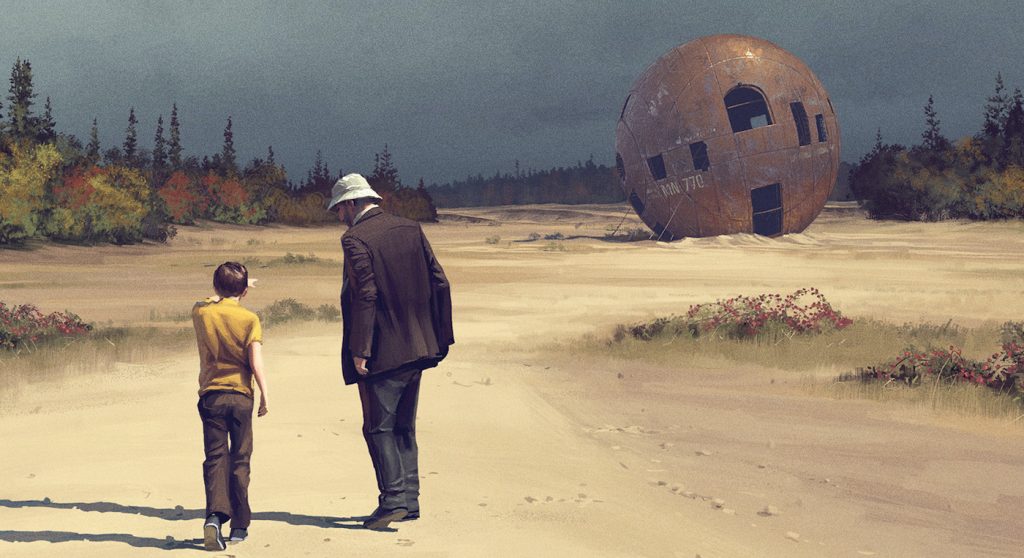 Tales from the Loop, Amazon’s latest sci-fi offering which stars Rebecca Hall and Jonathan Pryce, resists easy definition. Set in Ohio but based on paintings of Sweden, the residents of the small town at the center of the series are all loosely bound by a machine known as the Loop, a technology intended to unlock the universe’s mysteries and the town’s main employer. Thanks to decades in business and the abandonment of various detritus—robots and body-switching contraptions left in the woods, a little gizmo that freezes time dropped in a lake—the Loop has an outsize effect on its neighbors, though they take these disruptions to their otherwise low-fi lives in stride. Living near the Loop, you may meet yourself as a child or accidentally freeze the rest of the town until you’re inclined to flip the switch, but these abnormalities never outpace primary concerns like love, family, or regret.

Part of what makes the show unique, points out visual effects producer Andrea Knoll, is that that this “is probably the first series to be based on paintings.” Tales from the Loop closely hews to its source material, the work of Swedish artist Simon Stålenhag. Stålenhag is known for his depictions of a bucolic Sweden, punctuated by robots and cooling towers and other representations of the technological world, looking unexpectedly at home in their rural settings. To convert these works to narrative television without losing their pastoral quality necessitated a particular restrained approach to the show’s visual effects. For Knoll, whose credits include Stranger Things, there was little similarity between that small-town sci-fi world and this one.

“We were always trying, on Tales from the Loop, to achieve as much as we could emotionally with the work, and having that be done subtly,” she explained. “There’s so much you can do now with visual effects and with CG, and we were always working really hard to stay away from that.” A showdown between a melancholy bipedal robot and his aggressor is slow-paced and ungainly—about as far from a Transformers reference as fighting robots can get.

The show’s restrained take on sci-fi can leave a viewer wondering what’s what in terms of practical and visual effects. “When I first saw the scripts, I thought most of the work would be CG, and then it turns out that everyone wanted to try to accomplish as much, practically, as we could,” said Knoll. Her team’s goal was to achieve a photorealistic, seamless result between full CG, enhancements and set extensions. For example, take that lonesome blue robot in the woods: seen in close-ups or inactive, “that work is practical and in visual effects, we would just do a paint-out. The puppeteers really executed the right emotions for those scenes,” Knoll explained. “Anytime we have to take it further, by doing anything dynamic, if the robot is running, walking through the woods, that’s full CGI animation.” For viewers, though, at the forefront is the robot’s tragic arc, not the technology that brought him to the screen.

As Tales from the Loop shifts its focus between storylines, so go the series’ visual effects. Whereas some episodes are concerned with the plight of a marooned robot, the biggest sci-fi aspects at other moments are ancillary details, like a small swirling sinkhole in a field or the airwaves generated by a hovering tractor, right before it slips into a concurrent alternate reality. Either way, the show stays tightly visually true to Stålenhag’s source material. “We made models and painted texture on all these things to match Simon’s work, but then it was really about making sure each image, each frame that we’d see on screen, feels like a painting,” said Knoll. Prioritizing the human element was intentional, with the VFX team working “to keep the visual effects more subtle, so that it wasn’t overtaking any element of the emotion of the scene or of the story,” said Knoll.

Sometimes this was as much about taking elements out as it was enhancing them. The show’s third episode tries to answer the question of how things might work out if lovers could stop time. Green screen posts made it easy for the actors to do their job: remain frozen for most of the 40-minute episode, after high school student May (Nicole Law), revives a lost contraption that freezes everyone and everything in town, besides her and her new boyfriend. With the episode shot on location, nature was a trickier collaborator. “That ended up becoming one of the more challenging episodes because we’d have to go in and interrogate each frame,” said Knoll. “We’d look at nature elements in post-production and editing, and we’d count movement of the trees or the shadows.”  And in this quiet sci-fi drama, attention to trees and shadows is as key to the story as robot movements and futuristic architecture—without the two working in tandem, the wonder of Stålenhag’s paintings would have been lost.

Tales From The Loop is currently streaming on Amazon Prime Video.

Featured image: One Sheet – Ecosphere, from ‘Tales From The Loop.’ Courtesy Amazon Studios.