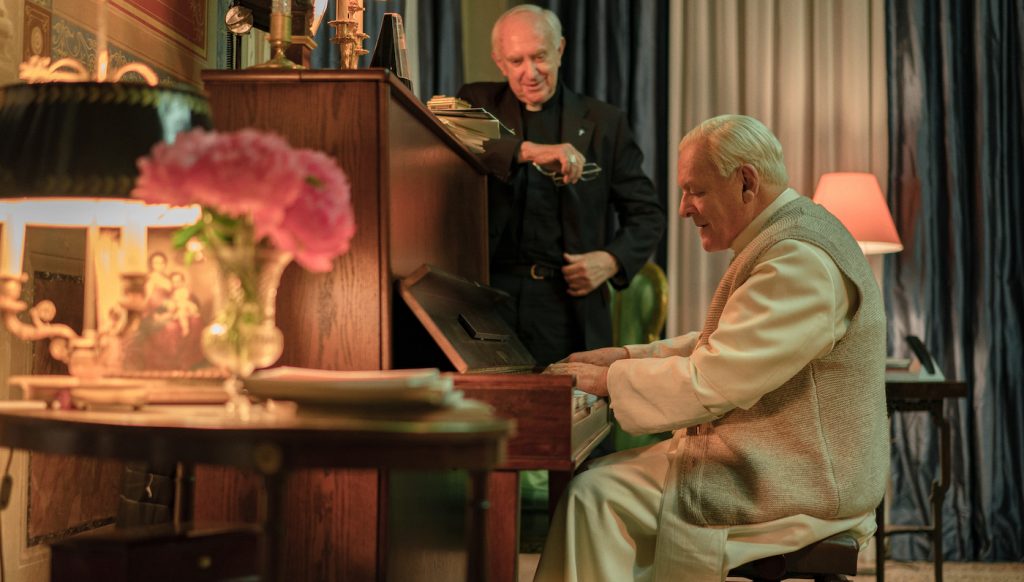 In Netflix’s The Two Popes, director Fernando Meirelles’ fictionalized, engaging take on the friendship between Pope Francis and the Pope Emeritus, Benedict XVI, the closer to the present the two men are depicted, the lighter the atmosphere becomes. Bergoglio (Oscar-nominated Jonathan Pryce) and Ratzinger (Anthony Hopkins) spar over issues from divorce to the Catholic Church’s protection of pedophile priests, against brightly-lit backdrops like the Sistine Chapel (recreated in minute and much-praised detail) and Castel Gandolfo, the papal summer residence. The bulk of the two men’s talks take place while Ratzinger is still pope, and despite the scandals that dogged his regime, there is an intentionally positive air attached to this period throughout the film.

“Everything is much more open, thanks to the work of the press, thanks to the work of social media, thanks to the curiosity of people who research,” César Charlone, the film’s cinematographer, explained. Thus the popes’ light and airy near-present, meant to reflect a new period for the church at large. “We’re getting so much more information and things are so much more transparent. And we’re able to discuss them,” Charlone added. When The Two Popes travels back in time, a darker picture emerges. Using historic news footage from the period of Argentine military dictatorship as a guide, Charlone shows Bergoglio’s entry to the priesthood in the 1950s in black and white, then transitions to deep, saturated tones in order to take on his controversial legacy as the head of Argentina’s Jesuits under the dictatorship.

Though these scenes, The Two Popes presents a significant part of Francis’s past that might be news to many outside of Argentina, but they’re merely historical background to the crux of the film, a series of wide-ranging conversations leading to Benedict’s resignation and Francis’s nomination. Addressing the popes’ countervailing takes on almost every issue faced by the Church today, The Two Popes is thoughtful yet lighthearted, envisioning a Benedict who entertains Francis on the piano at Castel Gandolfo, and later, the Argentine dragging his German predecessor through a tango lesson in a Vatican courtyard.

Here the film lets viewers into sacrosanct locations most laypeople will never get to visit, like Castel Gandolfo’s real entrance and gardens, along with interiors shot in lookalike palaces made available by the Italian government. “People talk about my photography and I say, all I did was register what they put in front of me! And what they put in front of me was art, pure art,” said Charlone. However, the cinematographer’s handheld camerawork adds a layer of realism and activity to these locations, which might otherwise come across like an after-hours peek at a museum. “Since we had a kind of theatrical script in the sense that it was very spoken, and we were dealing with a subject that could be fake or fictional, we wanted it to be believable, that people would feel that they were there,” Charlone said of his motion-filled work. “We wanted it to be less fake, not so mounted, not so created, but kind of documentary style.”

Through a series of extreme close-ups, the film further welcomes its viewers into off-limits papal chambers and the private talks between the two men, an intimacy that Charlone planned from the outset. “When you are talking to your friend, you look at his eyes, you look at his mouth, you don’t look at his shoulder,” the cinematographer explained. “So I said we should be as close up as we can, and help the audience see every little wrinkle, every little detail, every expression of these actors.” When The Two Popes isn’t zoomed in on its subjects’ hands and faces, Charlone gets close to the objects that signify their place in the Church. The wooden balls of the nominating process rattle, needles thread ballots for Ratzinger, then Bergoglio, and here are the red leather shoes of the papacy, which Benedict wears and Francis rejects. The two popes might have never really discussed Francis’s past over pizza in the Sistine Chapel, but thanks to the immediacy of The Two Popes’ camera work, there’s no reason to believe otherwise.

The Two Popes is streaming now on Netflix.