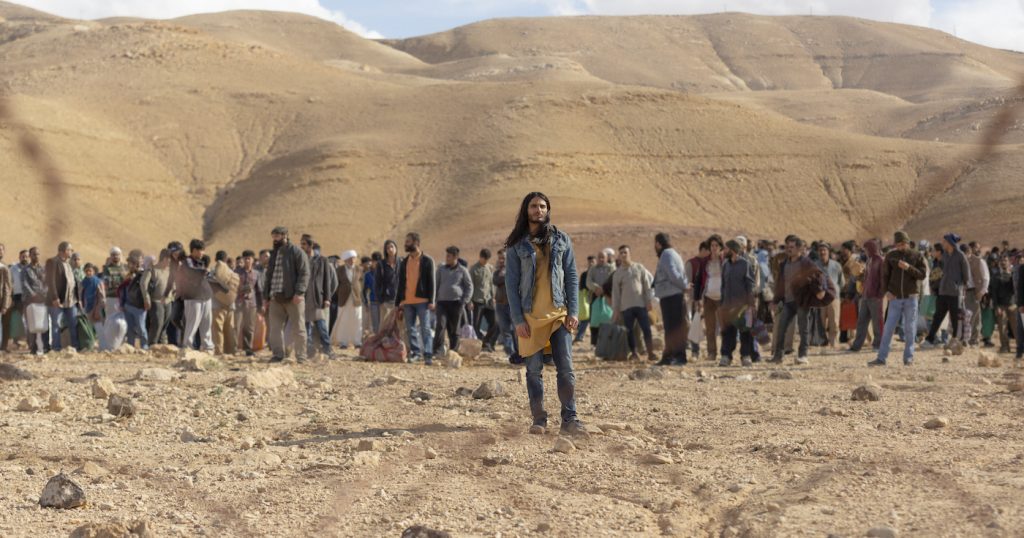 Early on in the new Netflix drama Messiah, CIA agent Eva (Michelle Monaghan), paradigmatically dogged in her duties, informs a failed prospective job candidate, “the truth may look gray, but I assure you, it is not.” It’s easy to guess that Eva’s next assignment will have her rethinking the office hiring policy. After she becomes aware of a long-locked, proselytizing enigma first spotted preaching mid-sandstorm to a band of followers in Damascus, at Eva’s insistence, the CIA trains their attention on the charismatic young man (Mehdi Dehbi). By the time Al-Masih, or the titular messiah, leads a group of Syrian-Palestinian refugees to the Israeli border, the U.S. government agency, as well as the international media, are hooked.

Al-Masih steps over the barbed wire fence and promptly gets arrested. Under interrogation, he is daffily all-knowing in his dealings with Avrim (Tomer Sisley), the self-righteously enraged type who does the work people in front offices don’t want to know about but from which they are happy to benefit. Avrim storms out, leaving Al-Masih serene in his jail cell, from which he disappears. Political fallout follows for Avrim, the CIA alarm bells go off, and Eva shows up in Israel, where she and Avrim fight over the very earthly concerns of who gets to be in charge of what. Al-Masih, meanwhile, resurfaces in Texas, at the site of a rural church in the middle of a tornado, where he saves the struggling local pastor’s daughter. So much for just another rabble-rousing con-man.

Toggling between squabbling government agents, the Syrian-Palestinians stuck at the border, Al-Masih’s growing American following, and the would-be messiah himself (who alternates between appearing where he’s needed and holing up in a tent), Messiah is set against a backdrop of real contemporary events and populated by a world of characters believably ambivalent about the fact that they may or may not be in the presence of a second coming. Outside the matter of is-he-or-isn’t-he, the show was written to be as authentic as possible, Kate Woods, who directed the series along with James McTeigue, tells me. “The more real it is, the more touchstones there are for all the different kinds of people who are going to see this,” she said. “It is quite a big concept to say that this could possibly happen. I think that all of us on the show, our approach was to make it feel as real as possible. Moment by moment, what would this person do? How would he be reflected by the rest of the world at this moment, according to our research and knowledge of the world as it is?”

Al-Masih also exposes a realistic world, one fluctuating between love and trust and apathy and hostility. The Syrians come to feel abandoned. Avrim, trapped in a political situation further screwing up the mess he’s already made of his life, is full of hatred. Workaholic Eva can’t let anything about Al-Masih go. The American pastor is an instantly faithful member of the flock. “One of the great things that I really loved about [the show] is that all the major characters are introduced at a time of great emotional vulnerability,” Woods said. Outside moments of natural disaster or rare violence, Messiah is almost hushed, with many of its most resonant, contemplative moments playing out at night. “It’s about how huge things affect people at a very deep level,” Woods said. “Often, that’s in a quiet way.” Shooting after dark also gives the show a sense of immediacy from a global perspective—at the same time that an American mother drives her cancer-stricken child to Al-Masih in the Texas sunshine, political infighting in Israel comes to a head during the night.

Early on, we learn this potential messiah isn’t your grandparents’ religious conservative—one of his first acts is to demand a Muslim cleric give up his seat to a woman after the cleric laughs off his question as to why there are no women present within the desert pilgrimage’s inner circle. In casting Dehbi, the show-runners also throw off the historically extremely unlikely but nonetheless pervasive image of a thousand years’ worth of white Jesus in religious art. By following a CIA agent though her is-he-or-isn’t-he quest, the show neither subverts religion nor encourages it, instead relying on a range of reference points from all the monotheistic faiths with their roots in the present-day Middle East. Al-Masih speaks Arabic, Hebrew, and, practical for any messiah paying a visit to the world today, English. One of his most frustrating traits for Eva and Avrim is that he can’t be pinned to any one group, but it makes plenty of sense for the show, which “is not about religion,” Wood clarified. “It’s about faith and belief.” Despite the sophisticated tools at their disposal, Al-Masih’s pursuers are stuck in their struggles to balance evidence with precedent. And the more bent out of shape they get, the less able they are to find answers, with Messiah leaving you, the viewer, to choose what you see fit to believe.

Messiah is streaming on Netflix now.