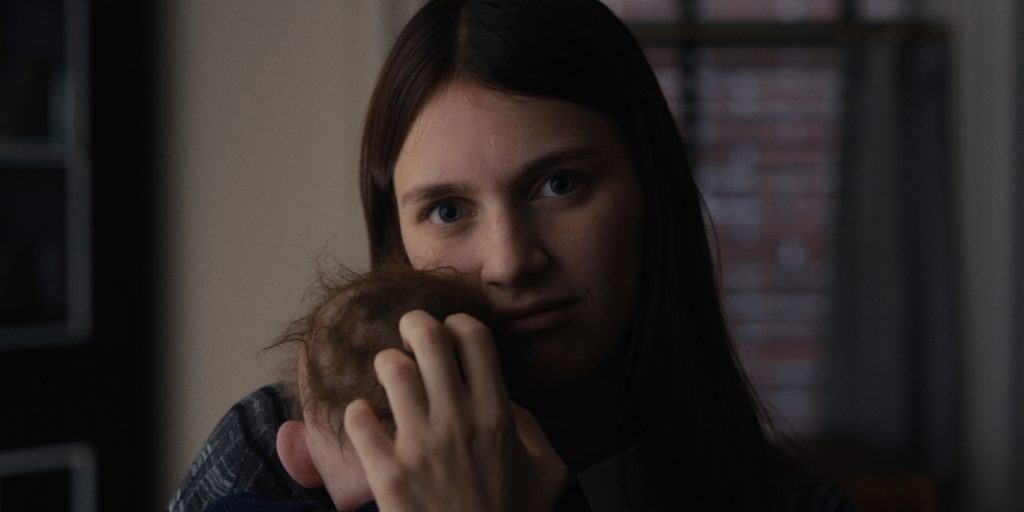 M. Night Shyamalan and Tony Basgallop’s Servant is one of Apple TV+‘s weirdest, wildest new shows. As always with a Shyamalan production, there are creepy twists aplenty on offer here, but there’s more to Servant than narrative surprises—there’s bracing oddness to it, amplified by terrific performances from a great cast and technical mastery from Shyamalan and Basgallop’s talented crew.

Servant is set in Philadelphia (Shyamalan’s preferred location, which this Philadelphia native cheers), at the beautiful townhouse owned by Dorothy (Lauren Ambrose) and Sean Turner (Toby Kebbell). It begins on a rainy night when a young woman, Leanne Grayson (Nell Tiger Free) arrives to babysit the Turner’s baby son, Jericho. The thing is (Apple revealed the following well in advance, but spoiler alert, I guess), baby Jericho died when he was 13 weeks old. What Leanne has arrived to babysit is a truly creepy lifelike doll, used since Jericho’s death and Dorothy’s subsequent mental breakdown. Sean tells Leanne in private that they’re attempting something called “transitory object therapy” in an effort to help Dorothy recover.

Yet Leanne herself seems to believe the doll is a real baby, too, which understandably creeps Sean out. Because Sean’s a chef and spends time in his expansive home kitchen creating recipes, he clocks Leanne with increasing concern as she goes about the day treating the doll as if it’s really alive, tending to it with unnerving care. When Dorothy’s brother Julian (Rupert Grint) gets involved, believing that Leanne is just after his sister and brother-in-law’s money, things only get more complicated, and dangerous.

To say more would ruin the many shocks to come, but costume designer Caroline Duncan can help steer us through the series’ claustrophobic intensity by explaining how she helped create a story about a family in crisis and a possibly dangerous interloper in their house through the wardrobe.

“What a different perspective to tell a story that’s really about grief,” Duncan says when asked what first drew her to the project. “What an interesting opportunity to create empathy and drama in terms of a very claustrophobic family dynamic coping with the death of a child. What’s the interplay between these four characters in this very small space? I was fascinated by the theater-like nature.”

The theater-like nature Duncan’s referring to is the fact that the show takes place almost entirely inside the Turner’s home, and is focused on the four main characters. “Because the set is a brownstone that was built on a sound stage, we never leave the house in the entire season, which is really unusual,” Duncan says. “We felt there was a really interesting opportunity to create dynamic looks that paralleled their grieving.”

For Ambrose’s stricken mother Dorothy, Duncan sought to create a “garish opulence” to her wardrobe. “We chose heavy-handed patterns to put on her, over-scaled florals, rich silks and satins, these deep colors that play into her family’s wealth, but also in defiance what’s really happening,” she says. “Really, she should be grieving for her baby, but instead she’s in complete denial. It’s the opposite of funeral attire, instead, it’s this great showiness, she’s really dressing for an audience. Once I saw what production designer Naaman Marshall was doing with wallpaper and tapestry, with her bedroom’s overwhelmingly black and white floral element, I leaned into it and add onto the pile of flowers.”

For Dorothy’s husband Sean, Duncan went the other way.

“He’s a chef, and he feels like he’s actually in mourning. He wears clean, basic, form-fitting clothes so a piece of fabric doesn’t get near a flame or a knife,” she says. “With chefs, the more blood on your apron the less excellent a chef you are. So there are a few moments where he gets a little something on him, but we chose to keep him tight and clean because he’s such a controlled, top form chef. It was right after Anthony Bourdain had died, so I was looking at a lot of images of him, every once in a while you get a glimpse of what their extracurriculars are, and you realize chefs are extreme, so we decided Sean used to drive motorcycles before he married Dorothy, so he’s got some motorcycles T-shirts. It’s his way of defying his wife, but in general, he’s pretty straight and narrow.”

For the oddball Leanne, Duncan says she wanted to bring in a sense of otherworldliness. The goal was for her clothes to make her stand apart and prompt the viewer to wonder where is this person from?

“I had kernels of information from Tony [Basgallop] and M. Night, so I kept her grounded and real, but also added these hints of a life outside that were not normative, not in line with how the Turners live,” Duncan says. “She feels very 60s, yet a primness that’s almost Victorian. She has an attachment to the kid, but it’s creepy. She has this formality, this eerie element that I wanted to echo in her wardrobe. I kept her in those A-line skirts that feel so outdated, especially for a nanny in the winter in Philadelphia, like she could be carried away by the wind. So I wanted her to have this odd lightness.”

As for Rupert Grint’s character, Dorothy’s brother Julian, Duncan refers to him as “the fourth corner of the quartet,” a person we never actually see in his own space. “For Rupert, what he’s wearing is the closest you’ll get to where he’s been. He’s the visitor that comes in and out of the house, and I wanted to connect him to Dorothy as siblings, so he’s got this lux quality. He’s a dandy, he’s never comfortable anywhere, he never takes his scarf off, or his coat off, so he can leave in an instant. It’s a fun challenge working with any actor who’s tied to one role [Grint is of course tied to his portrayal of Ron Weasly in the Harry Potter franchise], so I wanted to age him up, make him feel polished and give him a bit of gravitas. That pulls the audience as far away from memories of Hogwarts as possible. He has many finishes; the tie, the pocket square, the cufflink, the scarf.”

Because Servant takes place nearly exclusively in the Turner’s Philadelphia brownstone, Duncan was able to connect the clothing to the space in a way that’s not possible for shows in which characters are all over the map. “That’s the callback to working in theater,” Duncan says. “You think of Succession, a character goes to so many places. Because our characters don’t leave the house you’ve got an extra advantage so make sure the fabric you’re seeing works in the space.”

For one scene in the dining room, Leanne joins dinner in an outfit that Dorothy has prepared for her. “Dorothy dresses her up like a doll,” Duncan says. “I wanted her to feel like a piece of furniture from another room that’s been moved and put in this room. It’s fun to have a show where you’re constantly mirroring the interior landscape. They’re living in a nightmare. The horror is losing a child. The rest is how we cope or unravel. The house tells that story. The costumes tell that story.”