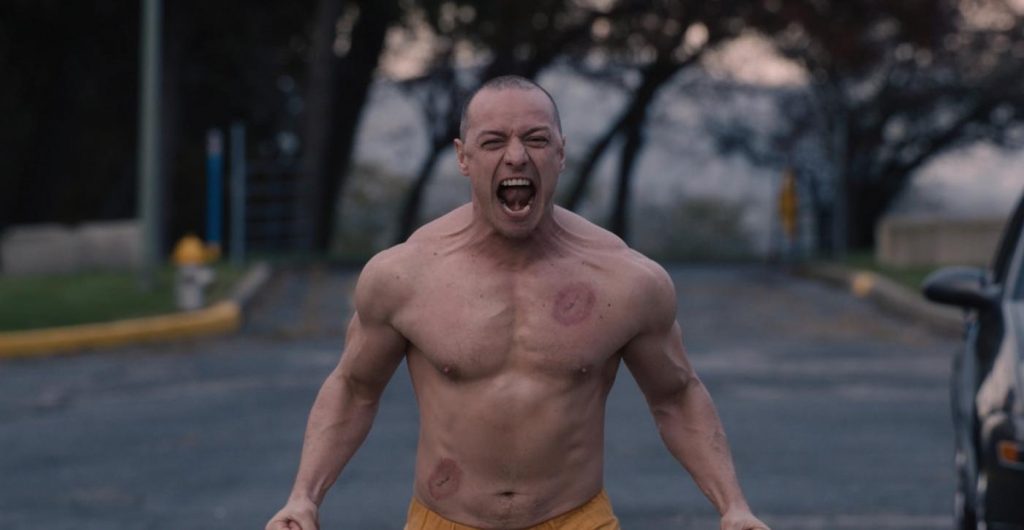 M. Night Shyamalan’s Unbreakable came out in 2000, and to get the movie made, the director deliberately billed it as a film about anything other than superheroes. Nineteen years on, a slew of superhero films have erupted from Hollywood, and they are by and large nothing like Shyamalan’s trilogy, which also includes 2016’s Split, and now, Glass. Is this final chapter even a superhero movie? The main characters themselves are unsure—as the film opens, Bruce Willis, as the unbreakable David Dunn, is a security store owner and Philly street vigilante. Kevin Wendell Crumb (James McAvoy) is busy with his 20 or so different personalities, operating under the collective title the Horde, and Samuel L. Jackson’s character, the superbrain Elijah Price—well, he isn’t around at all. When the three finally come together, they—and their abilities—are under the thumb of Dr. Ellie Staple (Sarah Paulson), a psychiatric doctor who is steadfast in her insistence that their powers are all in their heads.

Dunn’s vigilantism leads him from the shop he runs with his now-adult son to an abandoned brick factory where Kevin has stashed his latest kidnapping victims. Here the unbreakable man meets the Beast, the most physically formidable (although hardly the most psychologically unnerving) member of Kevin’s Horde. Their fight leads them straight to Dr. Staple and the mental ward, though not before McAvoy’s character scales the walls in anger and has had time to show off, in rapid succession, a few of the people who occupy his mind. He is Patricia, restrained, erudite, British. But don’t settle in for tea—in a flash, the actor’s face contorts and now he is Dennis, a permanent nine-year-old who might not be exactly frightening, but is perfectly unhinged.

Watching Glass is all about watching McAvoy and the characters he’s created. The choice to name the movie for Elijah’s other moniker, Mr. Glass, was deliberate, but nonetheless, it’s with the Horde that the movie’s physical action and aesthetic fascination lie. Working with McAvoy, Willis, and the stunt team was Manny Siverio, a veteran stunt coordinator with 600-plus credits to his name. He spoke with us about McAvoy’s inclination to perform his own stunts, getting the Beast’s wild movements just right, and keeping the appearance of superpowers grounded in reality.

You’re absolutely prolific as a stunt coordinator. Was there anything completely different or new about your work on Glass, or is this old hat for you?

It was a little bit of both. There are certain limitations, when you have to deal with reality, that you have to incorporate into the project. It was different because we got an opportunity to, in some aspects, help develop the characters. I’ve worked with James in the past, and I’ve known him to be a very physical actor. He made it easy for me, because he had ideas, we had ideas, and we melded them together into the character he created, particularly when it came to the Beast. I had this idea of the Beast is a little like the DC character Animal Man, a comic book character who channels the abilities of animals. But James had his own take of what the character would and wouldn’t do. Together we made it work. Also what helped was that Night, as usual, was uber-prepared. The man had every action sequence storyboarded, which made life easier on the stunt department because we knew exactly how he planned on covering it.

Whose idea was that hyper-animalistic run on all fours?

Everybody loves that. That was an idea we came up with because when thinking about this fight, we always think, he’s in Beast mode, he’s in animal mode. Is he fighting like a gorilla? There’s a scene where he gradually drops down behind one of the orderlies, and that’s like a snake. So we were thinking of a Beast run, a galloping run, like a horse or a cheetah. Some kind of feral animal attacking.

It was so fluid, it was hard to believe it was an actual performance. Were the movements digitally enhanced in any way?

That was all real. In that particular case—James would be capable of doing it, but we were on a tight schedule that day, so his double actually did that.

How about when McAvoy’s character scaled walls?

That was also practical. A lot of that was up to our rigging team we had onsite. We had come up with the concept of him scaling the wall. We got to the location, rigged it, and did it. Some of the climbing James, some of it was the stunt double.

What was the rigging required for the Beast run?

To create that sequence, my stunt rigging team basically created a high-line, which in layman’s term looks similar to a dog-run or a clothesline. With a series of counter weights, the stunt riggers at both ends provide the harnessed stunt performer with just enough assistance to help him maintain the forward momentum, movement, stride, and position that helps create the action needed to produce the feral gallop effect of the Beast Run.

You’ve previously worked with McAvoy. Has he always veered toward doing his own stunts when possible?

James is a gifted and athletic actor, something I learned when I first worked with him on a movie called The Disappearance of Elenor Rigby. He insisted on wanting to get hit by a car—something similar to what he had done on an earlier film in Europe. He showed me what it was and we set it up. We literally had a Prius taxi cab skid to a stop, scoop him up to the hood/windshield, then stop so that he could slip back to the ground. After having a double show him how it was done, James proceeded to do the gag three times for camera. He was game, trusted the process, and sold the gag like a pro. From a stunt perspective, he’s a pleasure to work with.

For his character(s) in Glass, can you give us an example of one of McAvoy’s ideas as it translated onto the screen?

In the very beginning, when he and David Dunn encounter each other in the warehouse, we had some ideas on him going into gorilla mode, slamming and punting, and he insisted on that not working for him, that he would come up with something. There’s a scene—and I love this because it’s just a little nuance of something that he could do—where he’s getting pinned against the pillar by David Dunn, and he’s counter-pushing back, he kind of runs up the wall and pops himself off the wall. That’s all him. It adds a bit of texture and layer to the character and his fighting abilities.

Featured image: James McAvoy as The Beast, one of the 23 personalities that reside inside Kevin Wendell Crumb in “Glass,” written and directed by M. Night Shyamalan. Photo Credit: Universal Pictures