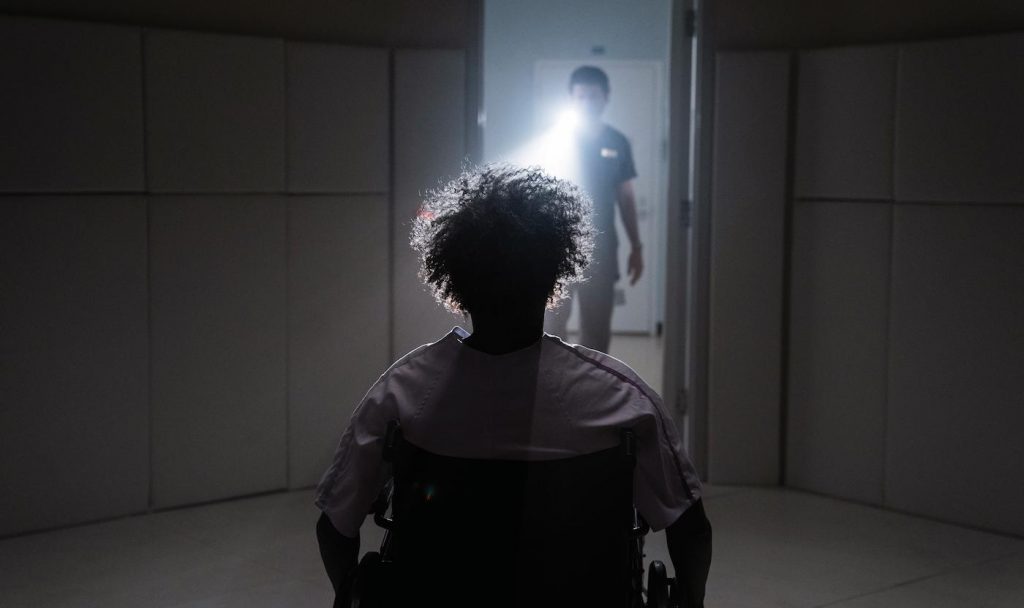 Are superheroes real? The central characters in Glass, M. Night Shyamalan’s conclusion to the trilogy that began with Unbreakable 19 years ago and was followed by Split in 2016, aim to find out. Chief among them is Dr. Ellie Staple (Sarah Paulson), an unorthodox psychiatric doctor who places David Dunn (Bruce Willis) and Kevin Wendell Crumb (James McAvoy) under her care in a sparsely populated Philadelphia sanitarium. Dr. Staple’s specialty? Superhero delusions. Dunn is now running a security business with his son by day and stalking the streets as the vigilante “Overseer” by night. Scaling up from treating street punks’ violence with violence, while on a mission to rescue some missing cheerleaders, he encounters the most alarming of Kevin’s 24 personalities, the Beast. Their fight, in which the Beast scales warehouse walls and tries—and fails—to crush Dunn to death, is caught by the police and brings them under Dr. Staples’s control.

Much of the psychiatric institution to which the two are relegated is bleakly monochrome, a quiet backdrop to the Horde, Kevin’s many personalities. Picking up the thread of a plot point set in motion in Unbreakable, Dr. Staple controls Dunn with water, or the threat of it, while flashing lights keep Kevin shifting through the characters who occupy his form (to watch McAvoy portray this is mesmerizing), rather than escaping or murdering his keepers. Unsurprisingly, the asylum’s third resident is the super-genius Elijah Price, also known as Dr. Glass. Glass is heavily sedated, he drools and for the first two-thirds of the movie, and does not speak. But Elijah’s circumstances are not as incongruous as those of Dr. Staple, whose clacking stilettos in this run-down setting combined with her alternative practices make one wonder how she plans to “cure” her patients.

Shyamalan and his crew filmed in and around Philadelphia where the story takes place, most notably being granted access to the defunct Allentown State Hospital, and this real former psychiatric ward serves as the holding pen for the film’s would-be superheroes. We spoke with production designer Chris Trujillo about getting the former hospital into shape, using real row houses rather than built sets, and filling in what Allentown couldn’t provide with seamless builds on stage.

Can you walk me through what was filmed on location, particularly at Allentown State Hospital, and what, if anything, was on a stage?

Actually quite a bit of it, in terms of what ended up on screen, was built on a stage. We did definitely take advantage of the location and used it to model some of what we built on. It’s an amazing facility and ultimately what we were angling for in terms of what we wanted the set to look like, anyway. Obviously, all the exterior, establishing stuff is on location and some of the hallways, one of the security hallways, Dr. Staple’s office, was at the location.

All of the characters’ rooms and adjoining hallways we built on a stage. We had a lot of fun with that because we had to design it architecturally so that all the rooms had doors facing each other. So we built this really interesting kind of intersecting hallway, with the rooms on a diagonal. As far as that went, we built a pretty elaborate set on stage. All their rooms, the security, surveillance rooms, the adjoining hallways, the patient items storage room where you have that showdown, that was all one continuous build that we did. We added the water tank to the facility’s exterior, and then had a version that we shot on a stage to get some of that interior, underwater work.

Did you have any favorite sets?

Some of my favorite sets—even if we didn’t spend a whole lot of time in them—were the characters’ domestic interiors, you know, the row houses. For all of us, it was really important that we felt grounded in Philly. We spent a lot of time looking for what we thought were really appropriate, archetypal Philly row houses, for the David Dunn home interior and for Mrs. Price’s home interior, and also where Anya Taylor-Joy lived in a foster home. Those were all in Philly proper. We basically took over houses that had the bones of what we were looking for in each character. It’s interesting, because there is a subtle socioeconomic difference even in a number of row houses, even if they’re very similar architecturally. So it was like, let’s understand what’s going on with David and his son. In Unbreakable, at least to my knowledge, the entire interior Dunn home was a build. We weren’t going to build an entire interior, so the way we approached that was because David and his son’s circumstances have changed for the worst after Mom died, they downsized. Now they’re living in a bit shabbier brownstone, just the two of them, and they’ve sunk a lot of money into the security store. That’s the story we told ourselves in terms of figuring out what their new home looks like, and why they’re not in the home from Unbreakable.

How much work did you have to do to get the Allentown Hospital ready for filming?

I should say that that the location was and is still almost an entirely derelict facility that’s been slowly falling apart for, I think, the better part of twenty-plus years. So to say that we just walked in and shot is crazy. We essentially took it over and completely rehabilitated the areas that we were interested in using. Resurfaced walls, repainted everything, changed a lot of finishes and fixtures, installed the new kind of cameras, technology, and all of that. It was a huge undertaking. It was essentially a complete overhaul of a decrepit facility, so it was challenging.

How did you research what you wanted those renovations to look like?

I always do exhaustive research, and we looked at dozens of facilities, their layouts, the tones and textures, and the wall finishes, to get a sense of what was appropriate as far as the color palette and all that stuff goes. Because we took our cues partly from the existing facility, we found that we were able to be a little wilder. We were actually inspired by some of the really bizarre paint colors and strange hallway configurations that existed in the Allentown facility. If we had just invented them, I think we might all have been a little hesitant, because they’re kind of bizarre. A lot of the rooms in the facility hadn’t been modified in 20, 30, sometimes 50 years. There were midcentury color palettes that hadn’t been painted over, so we were able to get a little perspective on what this place might have actually looked like mid-century. That being the case, we felt a little more secure saying hey, let’s make some really interesting, weird color choices in a couple places to emphasize some of these scenes.

Can you tell me about the process behind creating the superhero restraints: the water jets and the flashing light rig?

A lot of that was on the page to begin with. The David Dunn mythology is that his vulnerability is water, if you remember, from Unbreakable, that whole swimming pool scene. We wanted to solidify that as his kryptonite, and the idea was that Dr. Staple has done her homework, obviously, and she’s set these restraints up based specifically on these characters. So that was the idea, that they kind of retrofitted a wing of this insane asylum that had been decommissioned, and she retrofitted it to hold these very unique characters. And Elijah, obviously, had been in this facility for a long time. The Beast—I think that was an entirely new invention. That was already in the script when I read the first version. It was about figuring out the practicalities. If they’re controlling this character only with light, not only in his room does there have to be this heavy duty version guarding the only entrance and exit, but when they’re moving him around, they’d need to have some kind of mobile light situation. Which is how we ended up with the rolling light stand they keep in front of Kevin at all times.