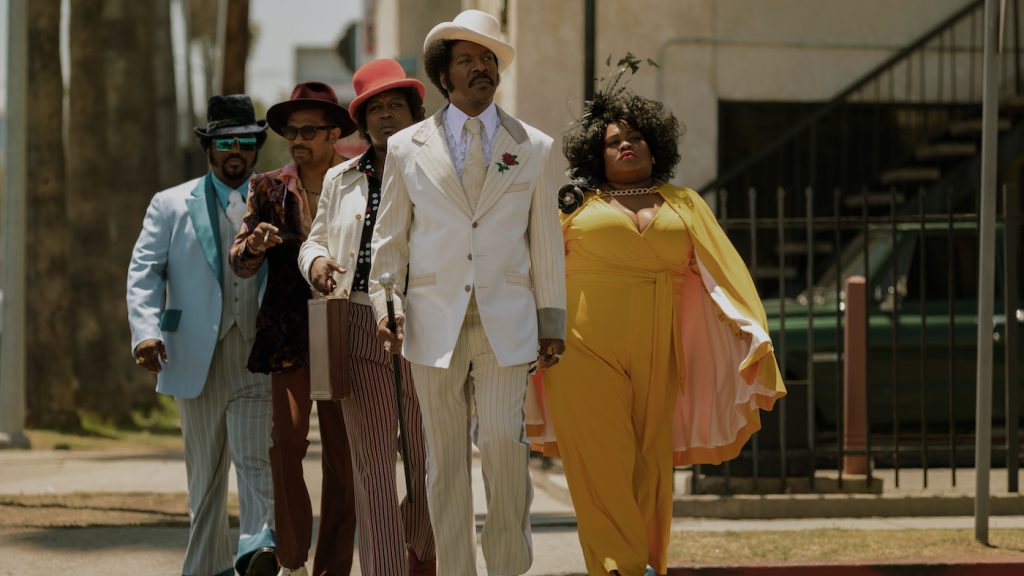 “There was a lot of collaboration among us,” says Vera Steimberg, who was the co-department makeup head on the collaboration between Eddie Murphy and Netflix on Dolemite Is My Name. The film itself recounts the historical collaboration of self-produced blaxploitation movie icon Rudy Ray Moore, who produced the original Dolemite, then “four-walled” it—exhibiting it himself—until it was eventually picked up by a distributor for expansion into both more movie screens, eventual video, and 70’s-era lore. An icon was born.

The challenges on the makeup and hair fronts in this story-about-a-story were twofold: Creating the real looks of Moore and his confreres, along with recreating how they all looked in the Dolemite film. Additional collaborators on those fronts included Oscar-winning costume designer Ruth E. Carter, and the co-department heads of hair, Carla Farmer and Stacey Morris. Their efforts were successful; the team has been shortlisted for an Oscar for Makeup and Hairstyling.

“It’s so much easier when you see what she’s about to do,” Steimberg says of Carter. And like Carter—who won an Oscar for her work on Black Panther—Steimberg has also logged in time in the Marvel Universe, on entries like the Avengers and Guardians of the Galaxy films.

The huge difference from those, as she describes it, is that instead of building characters that weren’t real, or literally had comic-book hues on their faces, here you have a biopic where the subjects exist “on camera already.”  Steimberg, Farmer, and Morris all watched the original Dolemite and other Moore films, with Farmer looking at additional contemporaneous films like Saturday Night Fever, Thank God It’s Friday, and the musical documentary Wattstax.

Steimberg says it was important to make sure we were on top of everything, which included even going to the casting of background actors, making sure the women didn’t have hair implants, and “covering tattoos (and) adding facial hair.”

Morris adds that while “people now like sharp lines,” in their beards, and on their scalps, they didn’t have those razored borders back then. “If anyone had that, we would blend out their beard lines, to take away those hard lines,” she says.

“People are going to look at the hair first, and then the wardrobe,” says Farmer says, who noted the importance of the collaboration with Carter in deciding what historical moment they’re watching. But also consider that in each period of history, people—especially the elders—often wore their hair according to the looks of previous times.

Just because the story is set in the ’70s, Farmer notes that “not everyone had 70’s hair.” And while people, fifty and older, who were alive then would come in “with their afros and their bell-bottoms,” they’d be told that “now you’re your a mother and your grandmother.” In other words, playing over-50 in a previous age. “Small details become the large details,” Farmer says. “Not everyone had an Afro, and everybody didn’t have the same hair shape,” she adds.

Morris points out that Wesley Snipes’ character, the actor (and original Dolemite director) D’Urville Martin, “didn’t have a big Afro. Everybody wasn’t all the way hippie back then.” Though many of the locks did reflect the raffish influence of the bands then, particularly for the Caucasian men, even those playing FBI agents.

Steimberg says that they were filming during a sweltering summer sun that caused many challenges, including keeping the hairpieces on and tending to the multiple costume changes Murphy’s character would have.

The latter often meant new hairpieces, too, as Rudy Ray finds increasing success as a nightclub comedian both on record and the proverbial “chitlin’ circuit,” before turning to film production. Thus, with an uptick in material comfort, his hair might change, too. Steimberg remained focused on the make-up, often using modern products to create whatever look she wanted for the actors. “There so many good color palettes (now), we can recreate any era. You don’t have to go to the makeup they had back in the day,” she says.

This was a slightly different than the approach Farmer and Morris took. Farmer says she didn’t allow actors or background performers to use electric curling irons, because the curl doesn’t last as long. So they tried to use equipment from the time. “The 70’s curling irons were of a certain size,” Farmer says. “We don’t really have that size of curling iron as the most popular now. Most of those curls were really tight, they weren’t that soft-looking.” So now Farrah Fawcett curls, for example.

But even if the 70’s produced iconic hair, Morris says “we also had to make good-looking bad hair,” which may kind of sum up this film about a film: A terrific production about a bad-yet-sincere movie whose shelf life has just been revived. “we had real wigs, we had synthetic wigs,” Morris says. “This film for me, is such a great representation of the time, the period, Eddie’s performance, it’s a complete package.” If they do get nominated, it will be the first time for African-American hairstylists, particularly on an African-American themed film.

The only downside to such a nomination is that the thoroughly intrepid, and undaunted, Mr. Rudy Ray Moore wouldn’t be here to see it.