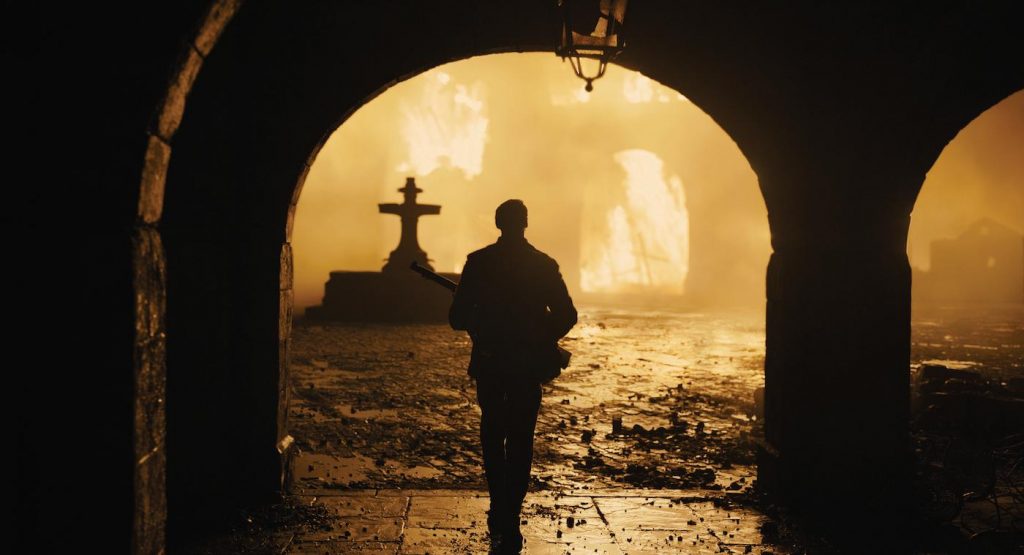 “The third time,” director Sam Mendes said to screenwriter Krysty Wilson-Cairns when asking her to co-write 1917 with him, “is the charm.” And in a film that shows how random luck is as much a factor in surviving war as anything else, he was right.

Wilson-Cairns had originally come to his attention through a combination of a well-regarded script on “the Black List” — that rundown of the best crop of unproduced spec scripts — with a project called Aether. Set in a proverbial near future where a Philip K. Dick-like technology allows the recording of sounds from the past, a detective suddenly finds himself a suspect while using the Dickensian gear to investigate a string of murders.

That script moved Wilson-Cairns from near-future stories to tales set on either side of the previous turn of the century. She wound up as a writer on Penny Dreadful, set in a Victorian/Edwardian London chockablock with monsters. And Its creator and showrunner, John Logan, comes from a theater background, as does Mendes, who was also an executive producer on the show.

Logan was a well-regarded playwright, and Mendes, a touted director. After films like American Beauty and a couple of Bond installments gave him the room to develop his own work, he turned to his grandfather’s recollections of life in the trenches in World War I, particularly the stories of running messages through no man’s land.

And Mendes also turned, once again, to Wilson-Cairns. He’d initially asked her to adopt the Gay Talese book The Voyeur’s Motel, which, like Talese’s previous Thy Neighbor’s Wife, is about the secret undercurrents of sex in America. But a Netflix documentary on the same subject (and book) left the rights in what she calls a “kerfuffle,” so they moved on to a second project, based, in this instance, on a podcast, “that also didn’t work.” Also for various legal/licensing reasons.

So when Mendes phoned her again, there were additional auguries beside the charming third attempt. For starters, wars, by their very nature, are in the “public domain.” But further, “unbeknownst to Sam,” she recounts “I was actually a massive history nerd (and) knew about the war…I was so pleased. As a young woman, you rarely get a chance to write a war film.”

And it’s true that if war is the folly of men, telling stories about it—from Aeschylus through John Wayne, Oliver Stone, and beyond—has also been, for better and worse, the province of that same unsettled gender.

But Wilson-Cairns soon found herself at Mendes’ kitchen table, “and discussed some ideas he had. And together we crafted an outline.” Then she “went away and started writing it, driving through Northern France, writing the first draft,” but a draft that already had a specific structural mandate:  “Sam said from the word go that the idea in his head would look like a long continuous take. It changes everything before the script. You’re telling the story in real-time.”

But even “real-time” had its challenges: “As a storyteller, you have to work how far can you push it.” Wilson-Cairns allows how she didn’t believe all the film’s action “could happen in a single day, or a single two-hour block,” so there is one natural “jump” in the middle, even though the idea of the “single take” persists throughout.

But this wasn’t a concept cleared with studio development execs in advance: “Sam and I wrote the script on spec. We didn’t know if it would work. If it worked fantastically, then we would make the film. The script would be proof of concept.”

That one-shot concept was more than just a hook. “We did that for character-driven reasons,” she says. “We had to find a way to externalize the interior journey of the character, so you could understand his emotions.”

Those would be the emotions of Lance Corporal Schofield, played by another relative newcomer to the big screen, George Mackay. “The only real reason to do it was to get the audience to understand the inner monologue,” Wilson-Cairns adds, which of course, springs from trying to stay alive in the deadly dash from his own unit’s position in the trenches, across a “no man’s land” that is only too full of men from various sides, to the other troops to whom he is trying to deliver a life-or-death message.

The “Proof of Concept” appears to have worked. As cinematographer Roger Deakins, being bruited for a potential Oscar for his work on the film, told Variety, he originally thought it was a “gimmick” as well. Until he read the script. The single-shot conceit, he conceded, “is not right for every story. But it’s a great way to tell this particular story.”

That particular story was originally borne out of both Mendes’ family memories, and what historian Niall Ferguson called “the pity of war” when writing about the same conflict, is also being touted in other award races as well.

As for Wilson-Cairns, she has a couple of projects in various stages of production and development, including one with director and co-writer Edgar Wright.

The self-professed history nerd has referred to the “war to end all wars” (as it was once, in a brokenly optimistic way, called) as “a more complicated historical shitshow, for lack of a better word,” in an interview with the Polygon pop culture website. “Empire versus empire, war over treaties, men fighting for king and country without really knowing what that means. The man you hated over there was the exact same person as you.”

The reception to her feature film debut about that same “show” has been anything but. And many more takes, single and otherwise, lay ahead.