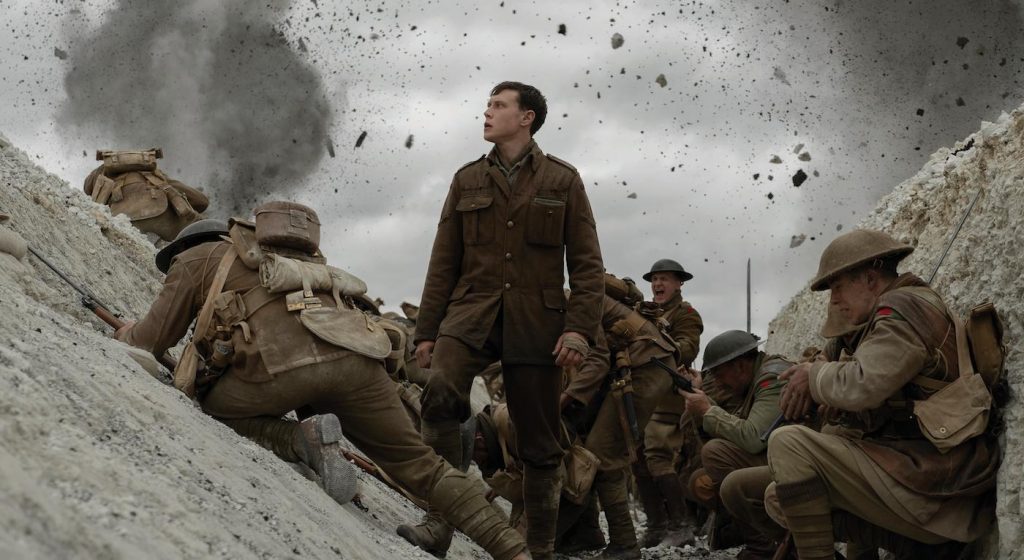 We knew co-writer/director Sam Mendes’ 1917 was going to be special (he wrote the script with Krysty Wilson-Cairns). He’s a director of extraordinary talent who surrounds himself with the same caliber of cast and crew. When we heard that his cinematographer was not only the legendary Roger Deakins but that the film had been conceived to essentially feel like a single continuous shot, we were even more excited.

The story follows two young British soldiers (George MacKay’s Schofield and Dean-Charles Chapman’s Blake) on their mission to deliver a message that could save 1,600 lives during World War I. In the process of trying to deliver the message, Deakins camera follows them across the killing fields of the war in a relentless, harrowing, yet intimate journey.

The Hollywood Reporter‘s Oscar prognosticator Scott Feinberg wrote that 1917 has crashed the Oscars race. This sentiment is being shared by critics far and wide, as well as fellow filmmakers.

Let’s take a brief stroll through some of these reactions:

‘1917’ is a thrilling, immersive, emotional journey into the heart of war. It’s exceptional on a technical level, yet frequently stunning in its simplicity. Sam Mendes & DP Roger Deakin (along with their crew) created a hypnotic cinema experience that is both riveting & moving. pic.twitter.com/qCrdquwdqC

1917 is audacious cinema executed by masters at the top of their craft. And two young actors who will go far: Dean-Charles Chapman and George MacKay. The single takes serve the story, as you search the space for the next rifle shot. Huge applause for the panel after.

1917 is a masterful study of suspense, artistry, and timing. I’m in awe of how Sam Mendes and Roger Deakins pulled it off. Definite nominations for picture, director, cinematography, and design. Possibly score and sound editing too. A major wow. pic.twitter.com/XXBjJRrgnN

Yes #1917 lives up to the hype. haven’t seen a sweeps movie since expanded ballot. This is not solely a technical movie – it’s an actor’s movie and they will know it.

From the second #1917 starts to the final frame, it’s a total immersion into another time and place and it’s just a stunning movie on every level. Another 2019 film that absolutely blew me away. See this on the biggest screen you can. pic.twitter.com/JfgXnnoyRR

It’ll be a powerful awards player. Lives up to all the promises Sam Mendes made in this story.https://t.co/uNzKcBod24