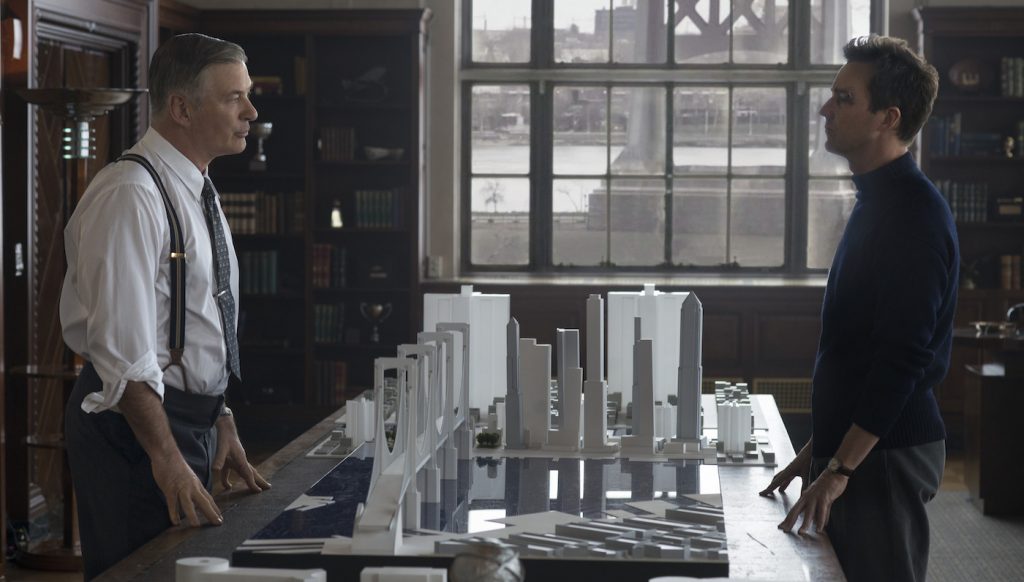 Edward Norton’s Motherless Brooklyn takes the spirit, and many of the characters, from Jonathan Lethem’s excellent 1999 novel of the same name, but from there goes in an entirely new direction. That direction included setting the film some 45-years earlier, in the mid-1950s New York.

Lethem’s most indelible character, a gumshoe with Tourette’s named Lionel, remains (played by Norton), but the setting, story, and stakes are all different. In Norton’s telling, Lionel’s case involves a man so powerful, most New Yorkers don’t even know his name.

That would be Moses Randolph (Alec Baldwin), based largely on Robert Moses the real-life world builder—or destroyer—depending upon whether you lived where he wanted to lay down a highway. Norton’s story of a seemingly overmatched detective taking on a man reshaping New York City in his own image required a crack team of collaborators, including production designer Beth Mickle and costume designer Amy Roth.

“I took a lot of photos from the documentary world, like Helen Levitt,” Roth says of her initial approach to the material. “More of the unseen people you don’t normally see in Life Magazine celebrating college graduation at Yale on a lawn party.”

Motherless Brooklyn is a mid-century noir, with Norton’s Lionel on the case from essentially the opening seconds. If there was a spiritual cousin to this ambitiously complex caper, it would be the seminal 1974 noir standard-bearer Chinatown, which turned sunny Los Angeles into a shadowy, serpentine cesspool of corruption, rape, and murder.

“Maybe halfway through our prep, Edward started bringing up Chinatown, although that film was set in the 30s,” Roth says. “What I took from Chinatown was a lack of ephemera in the background. If you look at Chinatown, it’s very pared down. You don’t have a lot of stuff in the background filling up the screen, it was more Jack Nicholson in a hat with a bandaid on his nose. There was something more compelling in seeing that image instead of dolling up the set with stuff.”

Roth says the idea throughout was to tell the story shine through, as did it in Chinatown, rather than “hit you over the head with period details.”

“I didn’t go into this thinking a lot about noir films. Edward and I looked at the look book I made, so we referenced that a lot,” she says. “This was a collection of photos that I felt represented each world that we were in. Whether it was the uptown socialite of the time at the Plaza, or the downtrodden in Harlem, or jazz musicians, it was just a unique look at the city told through the different neighborhoods we were in. You’d get a sense of where we were within the story.”

As Lionel follows the trail that began with his boss, Frank Minna (Bruce Willis) falling afoul of some goons, he goes all over the city in pursuit of the next lead. Each discovery leads him closer to Moses Randolph, and to trouble.

“I always pictured Lionel, because he was an orphan, selling newspapers on the corners back in the 30s, so I kept that look going. Wide-leg trousers, lace-up boots, and a work jacket,” Roth says. “He worked under Frank Minna, so he did whatever Frank needed him to do, and he could fly under the radar because he looked like this average working-class Joe. We gave him a worker’s cap, a la On the Waterfront. He was always doing odd jobs until he starts to emulate Frank Minna, at which point he starts to mimic Frank’s look, and then literally puts on Frank’s hat. I wanted him to seem sort of fluid and mobile in his movement. I couldn’t see this guy in strong shoulder pads and walk down the street in a double-breasted suit.”

For Baldwin’s all-powerful Moses Randolph, while Roth made sure he looked properly boss-like, she didn’t see him as someone who would go out of their way to make a statement with their clothes.

“I didn’t see him as someone who thought about clothing,” Roth says. “He was ambitious, so I think he didn’t think about the clothes. He had them made because that’s what you did. You went to a department store and had them made, monogrammed. There was a quote in the Robert Caro biography ‘The Power Broker’ about Moses hat he was a ham and cheese sandwich about him. There’s not a lot of elegance there.”

Although he’s only in the film for a few minutes, Bruce Willis’s Frank Minna is a huge character, and his death is the turning point of the entire story.

“It’s inferred that Frank was a bit of ladies man. He was the kind of guy when he gets a little cash in his pocket, he’s going to have shirts tailored to fit, he’s going to have his suits made, he’ll pick a flashier color to bring out his eyes,” Roth says. “He probably grew up with a father that told him he had to be a well-dressed man. He had to suit up because that’s what you’re being judged on. I had to make six tailored-made suits. He was very well-tailored.”

Willem Dafoe plays Moses Randolph’s down-on-his-luck brother, Paul. A brilliant black sheep, he conspires the entire film to help Lionel take his brother down, while clearly still coveting his brother’s respect. It’s a predictably nuanced role for the ever-game Dafoe, and he looks the part of the striving, possibly mentally unstable member of the family.

“He’s been cast out of the family and lives in a flophouse, therefore his threads were once good,” Roth says. “It’s been years of distress and aging so that these clothes have worn down to the bare nub, but he’s still holding onto them because it’s all he had. There’s this photograph of men in a bread line by Dorothea Lange, yet they’re all in beautiful suits.”

For Gugu Mbatha-Raw’s character Laura Rose, Roth wanted to make sure her determination to do right by the people Moses so viciously (and literally) bulldozes over came out in her look. Laura Rose, alongside Cherry Jones’ Gabby Horowitz, are the only two characters fighting for the lower and middle-class families of color that Moses is looking to displace with his grand ambitions for a highway-bisected Gotham.

“She’s our female lead, but she’s really a feminist of her time,” Roth says. “She’s got a law degree, she’s strong, and Gugu portrays that so well. You could dress her in almost everything, but that character is still going to come through. We dressed her smart. With a little feminist twist. No plunging necklines, she’d put a cardigan sweater over a blouse and button it up, then put a scarf over it. She was going into a line of work where most men weren’t used to talking to a woman.”

For Cherry Jones, so effortlessly embodying the strong, uncompromised but tender figure, Roth made sure she looked both potent but of her time.

“She wore a lot of wooly clothes. She was the mother to all those women working in the housing committee, and a feminist in her own right, but doing it in the way of the 50s,” she says. “She still wears what a woman should be wearing at the time. We didn’t put anybody in pants.”

“In period pieces, people kind of expects hoop skirts, bobby socks, and the like,” Roth says. “That just wasn’t this crowd. These people were wearing hand-me-downs. The way Edward tells the story, it brings it into the modern era. I think it was wise to move this story out of the book’s time in the 90s when we should all have known better then. Oddly enough, Gugu is more of a feminist than ever thanks to be set in the 1950s.”

Motherless Brooklyn is in theaters now.