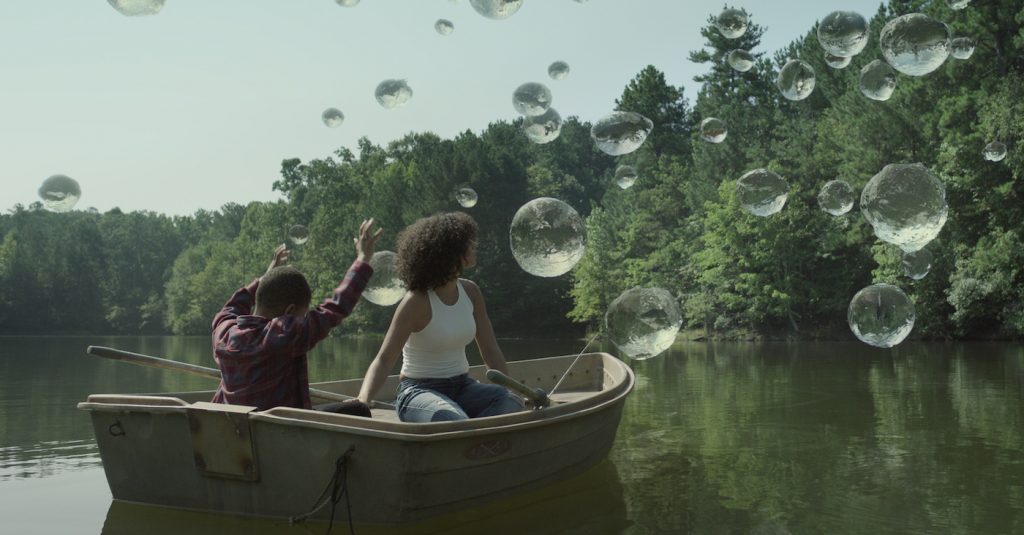 On film or television, there has never been a superhero origin story with a focus on the superhero’s mom. That changes with the new Netflix show Raising Dion, which is based on a 2015 comic book of the same name by Dennis Liu. The show features Alisha Wainwright as Nicole Reese, a young widow raising 8-year-old Dion (Ja’Siah Young), who begins to exhibit superhuman abilities. Michael B. Jordan plays her late husband Mark, and is also one of the producers on the series. The Credits spoke to showrunner and writer Carol Barbee about what she believes makes Raising Dion special, and so watchable for kids and parents of both the superhero and ordinary variety.

The cast has great chemistry. How did it come together?

We were looking for Nicole and Dion first. For Nicole, our casting director canvassed all of America and England, and we were looking for a great actress who was also a dancer. We hadn’t found our lead and started to feel discouraged. We went back to the drawing board, and literally that day, the show that Alisha Wainwright was on had been canceled, so she showed up on our list. She read for us, and she was taped, we were all just blown away. It was kismet. With Ja’Siah Young, who plays Dion, we saw lots of kids all across the country. When we found Ja’Siah, we all really gravitated to him as soon as we saw him on tape. What we loved about him, from the very beginning, was how natural he was. A lot of kids have been trained to say lines in a certain way, because you need them to make a joke work, or hit their mark, but it can come off a bit canned. Ja’Siah came in, and he was playing like a little kid. We could improv with him and he would respond, so we knew he had the ability to be a natural little kid onscreen.

Esperanza, who is played by Sammi Haney, is Dion’s best friend, but also happens to be a disabled person. How did you come to cast her? There are far too few people with disabilities represented in film and television, and she is a joy to watch.

I think she is the breakout. She is amazing and lights the screen and the room up. When I wrote the role of Esperanza, I wrote her as wise beyond her years, but as someone who lets things roll past her. She doesn’t take on the rejection, or anything anybody says about her that isn’t positive. She’s been brought up by people who love her, and they’ve taught her to love herself. She does not lead with the chair. We read a lot of kids in wheelchairs, boys and girls, kids of different races, it didn’t matter. I had written her as Latinx, but we were open to all ethnicities. There again, it was a case where we got to the end of the line, and we thought we’d seen everything. Our casting director had gone through so many avenues to reach kids in wheelchairs but had come to the end of the line. Then Sammi showed up, and she was perfect. We are so lucky to have her.

Traditionally people who have superpowers are either heroes or villains. From the very beginning, Raising Dion shows that, in real life, it isn’t that clear-cut. What was the conversation around the understanding that people are never purely one or the other?

Our true north when we were breaking the story was, “how do you raise a superhero?” It was the idea that sometimes the difference between being a hero or a super villain is how you were raised, or how you were loved. Who was in your life that was there to guide you? So we put everything through that prism. If you notice, when Dion teleports, he leaves behind this little trail of black smoke. That was on purpose. It is related to the black smoke you see when The Crooked Man is teleporting, and when he’s moving. What I wanted to say is, every kid, every person, has good and bad in them.

The issue of consent is covered in the show, and from the perspective of situations that children might experience. Why was that important for you to include?

I have a son who was born with some special needs, so I was very familiar with the special needs community. What was important for me, and what is a mission in a lot of things that I write, is to normalize differences. I know a lot of kids like Sami. I know how wonderful they are. We shouldn’t be thinking of them as limited in any way, and I do think that’s about changing perception. What I wanted to do with the character of Esperanza, is I didn’t want to point to her disability and say he was rejecting her because she’s disabled. He’s not. Ultimately he figures out she is his best friend. What he experiences along the way is jealousy, because another kid is getting close to her. He wonders what he can do, that the other kid can’t do. How can he impress her? He thinks, “I’ll make her walk. She’ll see what it’s like because obviously she wants to walk.” He makes the same mistake most of us would make. Sami, and by extension her character Esperanza, have never known a world in which they walk. They are this person, and the chair is part of them. When she realizes that that’s what’s been in his mind, that he is in some way seeing her as broken, it’s very upsetting to her. She is thinking she has accepted him for who he is, why can’t he accept her for who she is? He does realize he has misstepped, though. He learns from it.

Something else Raising Dion does is examine the balance between autonomy and following your parents’ wishes. Sometimes it becomes more about tone and less about actual dialogue. How do find a way to walk that line?

I think that’s the toughest thing about being a parent. Nicole says it in the show. She says, “I wish I could keep you safe forever, but that’s not how this works.” If you can just lock the kid in the house, and just take care of them there, it would be a lot easier. You have to fit them into the world. What you have to do is establish that bond, and have them trust you. When Nicole says, “It’s you and me,” she’s telling him to trust her, and that she’s there for him. There comes a point where you cannot be with them at all times. You have to send them out into the world. You both have to deal with the consequences. Parenthood is, step by step, letting go of the leash just a little bit, and seeing who your kid is. Ultimately, they are who they are. Hopefully, if you nurture what’s inside them properly, they become the person they were meant to be. You can’t make them into anyone, but you can mess it up. You can give them challenges that cause them to twist and turn, and not get where they would have been able to go. That’s why the tone is as realistic as it is. It’s not easy. Hopefully, in Raising Dion we are showing the realistic challenges of a young mom who is just trying to raise a good kid. This one just happens to be a superhero.