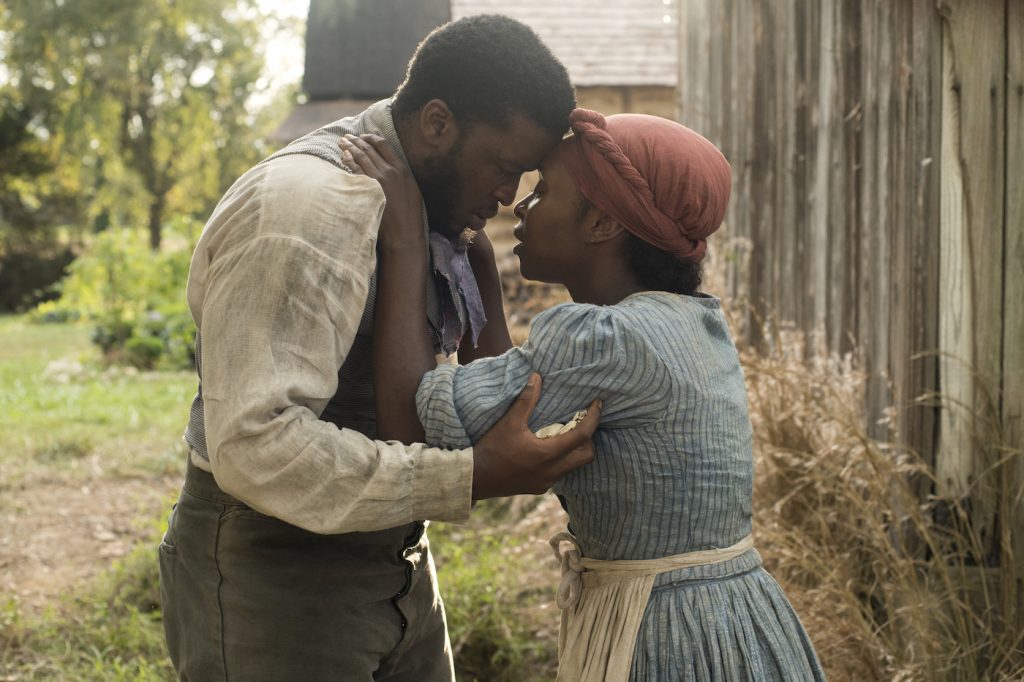 Although her appearance on the $20 bill has been predictably delayed by the current administration, Harriet Tubman is still a recurring presence in American culture. An escaped slave herself, she became, as the New Yorker noted a couple of years back, “the most famous conductor” on the Underground Railroad, which itself became the stuff of Pulitzer Prizes in Colson Whitehead’s alternate history novel of the same name.

Now Tubman arrives in theaters (on November 1), with Cynthia Erivo playing the American heroine in the eponymously titled Harriet, directed and co-written by Kasi Lemmons.

We caught up with the film’s production designer, Warren Alan Young, and its sound team, Blake Leyh and the routinely Oscar-nominated Skip Lievsay (who won for his work on Gravity), about how a world with no paved roads, relatively few railroad tracks, and no hum and buzz of power lines or electric lights, both looks and sounds to 21st century audiences.

For Young, who has been doing Emmy-nominated work for the Fargo TV series, and more recent period design for CBS All-Access’ Strange Angel, the work for any period “is a similar process—research is one of my favorite aspects of any project, no matter what the era. I’m endlessly curious about everything in the world.”

But with a recent boom in Tubman biographies, “we had access to a great bounty of researchers, including authors of recent books on Harriet,” all of them “most informative and most complete.”

Young also had access to agricultural historians, who could be consulted on what would have been planted, and at what time of year. “One of the main properties we used—the Berkeley Plantation in Virginia—has hundreds of acres of corn. We took advantage of that, and also wheat shoots coming up, instead of us having to plant these things are ourselves.”

And perhaps surprisingly, for the slave quarters, there were also gardens. To supplement their own meager allowances, slaves were “sometimes allowed to plant gardens in their quarters. They’d plant root vegetables,” and their staples “became what we refer to as soul food or American cooking.”

But part of the design process wasn’t just about what you could grow, or add, but what was missing, as well: “Jungles, woods, and forests are not as thick as they were then,” Young notes, even “woods today,  in the most untouched parts of America.” Of course, many of the trees are missing, including the once-dominant chestnut and elm, which, like much of the fauna, have gone nearly, or fully, extinct.

This means a journey like Tubman’s, when escaping slavery, made a hundred miles on bare feet, as Young emphasizes, would also sound different than it does today.

Blake Leyh, whose credits range between sound design, supervising sound editor, re-mixing, and a slew of music supervision—such as on series like The Deuce and Bosch—says that more than just thinking about replacing the rustle of passenger pigeons in a forest, for example, an even greater challenge was the urban environments of the time, such as Philadelphia, circa 1860.

Now, for example, you can “go to Times Square and record crowds,” he says, but for pre-electric Philly, “rather than using white noise or tonal stuff,” they thought “about specific sounds” that would be present. “Crowds, carriages, church bells, and birds.”

Which may or may not get us back into passenger pigeon territory, but regardless of specific avian components, the approach was “to build by layers. For Philadelphia, we brought actors in and recorded many layers of voices,” as a facet of post-production and  ADR work, since “when you’re shooting, you only want the sound of the actors’ voices.”

This means you want backgrounds to be “indistinct,” so as not to upstage your lead actors. “One technique you can use is foreign languages. I used some sounds I recorded in Uganda, of crowds in a neighborhood of Kampala.”

But it wasn’t only a matter of recreating Tubman’s “day to day” world, as fraught as that was. She was also “a mystic, and had visions—she falls into trances,” a state she would revisit, describing them as religious experiences, evidently stemming from the time an overseer threw a weight at her head, which also left her prone to severe headaches and narcolepsy.

In these trances, Tubman could see both past and present, and Leyh observes that “those sequences were challenging from a sound design  point of view.” The trance sequences “might have sounds that are distorted in a way – a poetic interpretation of these events.” The sounds may even exist in a grey area between sound and music…(composer) Terence (Blanchard) addressed those visions musically, but you don’t only want to do that. If it’s just music, the presence of music (alone) doesn’t convey to the audience what’s happening.”

Instead, Leyh says he sought “sounds out of context…I used bells, strings with rosin, air moving over surfaces of metal and grass… I spent a lot of  time recording those sorts of things.”

Lievsay, the film’s re-recording mixer, says his “hat’s off to Kasi and Terence” for their work on the film. “What a pleasure,” he says of Harriet, “to work with old friends.” He’s shared a half dozen or more projects with Leyh, adding that “we also mixed together on this film.”

Blanchard is also a friend of many years standing, as well as a jazz musician, whom Lievsay has heard play live many times. The composer also asked him “to do a lot of experimental stuff,” with the mix of the music, even though Lievsay’s guiding philosophy is to have “everything playing in unity with a volume that fits with the dialogue. That’s pretty much all you have to do.”

But he also acknowledges that “from what we know, Harriet did have visions,” and that a lot of Leyh’s sounds “reinforce the visual of her being swept off her feet,” or as he says, paraphrasing the title of a popular book, “the spirit moves you, and then you fall down.”

To give the audience the aural equivalent of falling, “we did some experiments with reverb, and added reverb equals altered reality, altered states. You can use something subtle, yet the audience gets what’s happening.”

He calls “the spiritual nature of the film—and the music—the heart and soul of the movie, beyond Harriet Tubman herself. It becomes, not operatic, but a musical, I would say, a beautiful place between a drama and a musical.