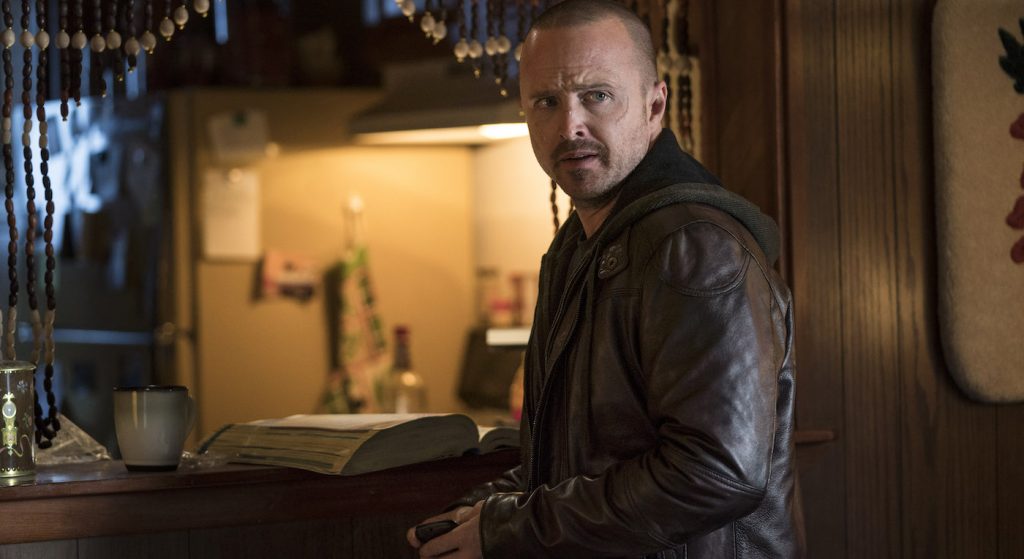 We’ve got the official El Camino: A Breaking Bad Movie trailer. We’ve got the official streaming date (October 11, 2019). And now we’ve got a better sense of what life after Walter White (Bryan Cranston) looks like for Jesse Pinkman (Aaron Paul). Spoiler alert: the dude has scars. Lots of scars, both mentally and physically. And he’s still got a lot of trouble on the horizon.

Remember where we left Jesse—he’d just escaped from hell. After being enslaved by a bunch of neo-Nazis and turned into their in-house meth maker, Walter showed up with a remote-controlled machine gun and, in a final “good” deed, mowed down the Nazis and saved Jesse’s life, giving up his own in the process. Jesse escaped in an El Camino, laughing and crying maniacally as he sped away. Breaking Bad thus ended after five glorious seasons. And that, we thought, was that.

But Breaking Bad creator Vince Gilligan had more story to tell. El Camino picks up mere moments after Jesse’s escape. He makes it to the only friends he’s got left, Badger (Matt Jones) and Skinny Pete (Charles Baker), who, while never the best criminals or meth dealers, were always first-grade chums to Jesse. They look shocked at their old friend’s appearance. He seems like a broken man. Yet as the mostly wordless trailer (there’s a single, important question spoken at the end) moves along, we see that Jesse will not simply turn himself in to the cops. Although he’s now the main suspect in the mass slaying at the Nazi compound, Jesse appears ready to fight. How he plans on doing this, and who he’s set to have a standoff with at the end of the trailer (the aforementioned question, coming from whoever is standing at the end of the hall with their pistol ready, is “Are you ready?”) is unclear.

Here is the official synopsis for El Camino: A Breaking Bad Movie:

The Netflix Television Event El Camino: A Breaking Bad Movie reunites fans with Jesse Pinkman (Emmy-winner Aaron Paul). In the wake of his dramatic escape from captivity, Jesse must come to terms with his past in order to forge some kind of future. This gripping thriller is written and directed by Vince Gilligan, the creator of Breaking Bad. The movie is produced by Mark Johnson, Melissa Bernstein, Charles Newirth, Diane Mercer and Aaron Paul, in association with Sony Pictures Television.