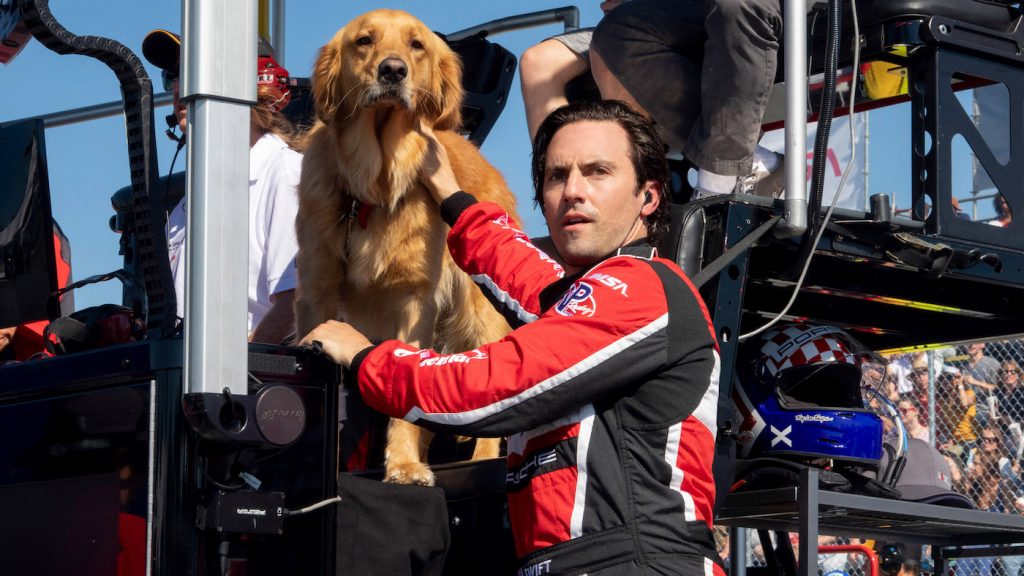 The Art of Racing in the Rain‘s Makeup Department Head on Working With Dogs, Kids, & More

Director Simon Curtis’s The Art of Racing in the Rain is based on Garth Stein’s beloved novel. Curtis (Goodbye Christopher Robin) and screenwriter Mark Bomback (War of the Planet of the Apes) have adapted the film, about a race car driver, his philosophical dog (yes, you read that correctly), and the growing family they both love. The film stars Milo Ventimiglia as Formula One race car driver Denny Swift, Amanda Seyfried as his wife, Eve, and Ryan Kiera Armstrong, and later Lily Dodsworth-Evans, as their daughter, Zoë. The film is narrated, however, by the family’s dog, Enzo (voiced by Kevin Costner), who loves racing as much as Denny. Enzo’s dream is to get to Mongolia, where, according to a documentary he watched, dogs get reincarnated into people.

Denny’s life is seen through the eyes of Enzo, who is there with him through thick and thin. It turns out that life can be quite a bit like driving a Formula One racecar; the conditions will change quickly and uncontrollably, and survival is as much about adaptation as it is about skill. Yet the analogies to racecar driving can only take you so far. Enzo will be by Denny’s side for challenges that will seem to be, at first blush, insurmountable. The biggest is when Eve gets sick—what follows will test Denny in ways no track ever has.

For makeup designer Natalie Cosco, The Art of Racing in the Rain was a captivating challenge. From baby teeth to depicting the ravages of both disease and time, Cosco had her work cut out for her. Filmed in and around Vancouver, The Art of Racing in the Rain is a beautifully shot, moving testament to the power of love. We spoke to Cosco about plying her trade on Curtis’s adaptation.

This is a very emotional film. Without giving too much of the plot away, you had characters here undergoing some very big changes, emotionally and physically.

Working with two actors like Milo and Amanda, they were both so committed to the role. It was quite an emotional experience for everyone. My biggest challenge was the scenes where we had to have Amanda looking as though she’d come back from chemotherapy treatment. She had to be bald, and they wanted her eyebrows gone as well. So our design options were prosthetics for that. That evolved and changed quite a bit before we really started building something. In the end, we went with a bald cap that enveloped her forehead area and all the way down beneath her eyebrows. This was done with a silicone-based product that we used, which gave her an opportunity to have the emotion she needed in her face. Often prosthetics can hamper that. The piece designed was really beautiful. That was a two and a half hour application on the days when she had that look. She was fantastic. Very tolerant of us (laughs).

Milo’s character changes quite a bit, subtly, but considering what he goes through I imagine this was one of your challenges as well…

Because the book spans many years, from when Danny is a young man, then progressing through to when he’s much older. We had to go through an aging process for Milo’s character Denny. We had to map that out, to make sure we had that working continuity wise. The producers and directors wanted to keep it subtle, but to show a real change in him. His character also goes through this stress dealing with his wife having a terminal disease and raising his child on his own, so we also had a bit of breaking down for him to show the stress of life on his face. We had a really good map of how we were going to do that.

What’s your technique for working with children? The young daughter, Zoe, is played by Ryan Kiera Armstrong as a little girl. Do your methods change at all for working with young performers?

The young Zoe presented an interesting challenge. Ryan was around 7 or 8 when we started, and she had a couple of loose teeth, so I had to prep for what happens if those teeth fall out while we’re shooting. So, we sent her to the dentist after one tooth fell out in the second day of the shoot, and the dentist built a pop-in bridge to hide that missing tooth. Then, of course, it got more complicated because as the weeks and months went by, her own little tooth started growing, so the bridge didn’t fit anymore. Then they made a cap for the tooth so it went in permanently, and then we’d have to file down so it kept fitting. These are the things we have to think of as makeup artists. It’s a lot more than just doing makeup, definitely a lot more than doing pretty makeup. It involves every gamut you can possibly think of.

Did your department have any responsibilities around the film’s central character, Enzo the dog?

The dogs! There were several dogs, they were some of the best actors I’ve ever worked with. The wranglers and trainers were quite incredible on the project. There were times, like when the dog gets hit by the car and they bring him to the vet and he’s on the table, and we were all watching from the monitor and we were shocked by the dog’s performance, he looked like he really was at death’s door!

My department sometimes semi-crossed over into the dog’s department. Some of the dogs, even though they were all the same breed, there were some differences, different coloring around the face, for example. So they asked if we had anything to lighten up the fur, so I put them in touch with companies that make this stuff specifically for animals and they were able to match the animals up so there were no continuity issues that way.