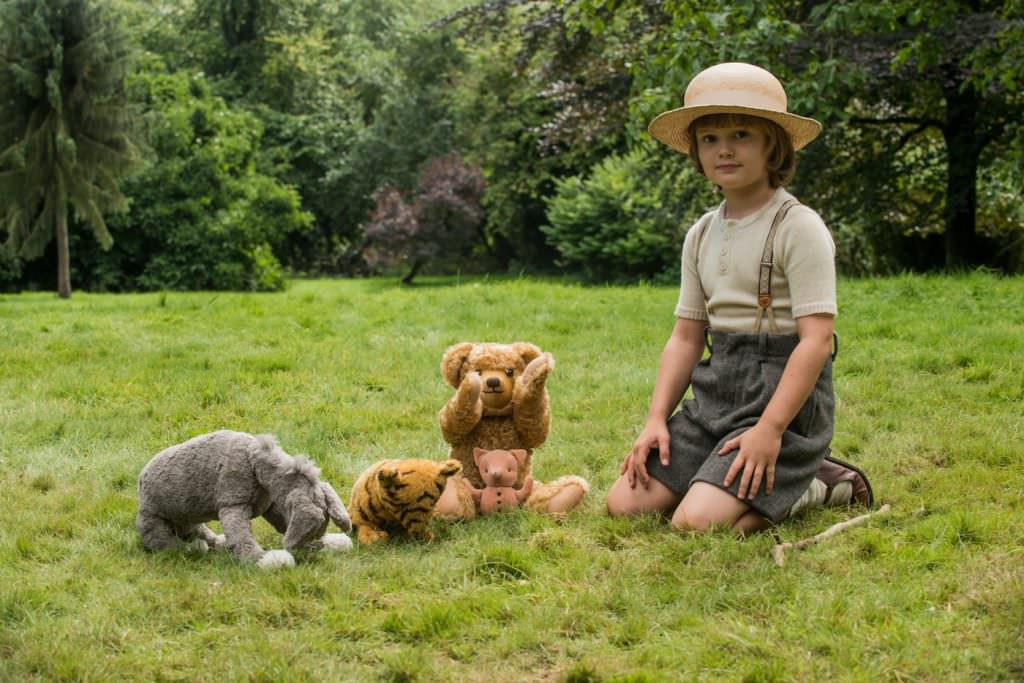 Seemingly all the world knows A.A. Milne as the creator of Winnie-the-Pooh, a bear whose escapades with his coterie of animal friends in the 100 Acre Wood were made up to entertain Milne’s little son, Christopher Robin. Not always known is the fact that Milne suffered from PTSD from his time fighting in World War I, and the 100 Acre Wood is the real life Ashdown Forest, which abuts the property for which the Milne family left behind a glamorous London life, partly so Milne could recover. Out this week is Fox Searchlight’s Goodbye Christopher Robin, from director Simon Curtis, which depicts all the magic of the Pooh stories’ creation, while presenting an adult glimpse into the relationship of Milne (Domhnall Gleeson) and Christopher Robin (Will Tilston).

With Margot Robbie as Daphne, Christopher’s mother, and Kelly Macdonald as the nanny, Olive, Curtis presents Milne’s transformation from fashionable London essayist and playwright in the mid 1920s, and the effect worldwide success wrought on the family. Enhancing both the magic and reality of Goodbye Christopher Robin is the unusual availability of many of the historic locations, from Ashdown Forest to the Milne family’s London home. We chatted with David Roger, the film’s production designer, on the unique experience of working with so many bona fide period sets as well as the difficulty of recreating illustrator Ernest Shepard’s iconic drawings, without either engendering copyright infringement or audience indignation.

Winnie the Pooh is so beloved. Were you a fan before the film or have a prior relationship to the works coming into the movie?

Between the Milne family’s bucolic life in the countryside, glamorous London existence, and Milne’s flashbacks to his war experience, what was your process like for designing such contrasts?

We were very lucky in being able to visit A.A. Milne’s real house in London, which was between owners, and therefore was empty. The builders let us in. It was very inspiring to go around with the black and white photos that still exist and look at the famous staircase where you see [Christopher] dragging Pooh down the stairs, the nursery where he sat with his stories and canoe and everything. That gave us a real flavor of the style of the house which was rather fashionable — later it would have been called an arts and crafts building — because A.A. Milne lived rather well in Chelsea, in the same street as Augustus John, and was always a fashionable writer, quite an important figure in the artistic world of London. So we found a house that we copied as faithfully as we could to the London environment. 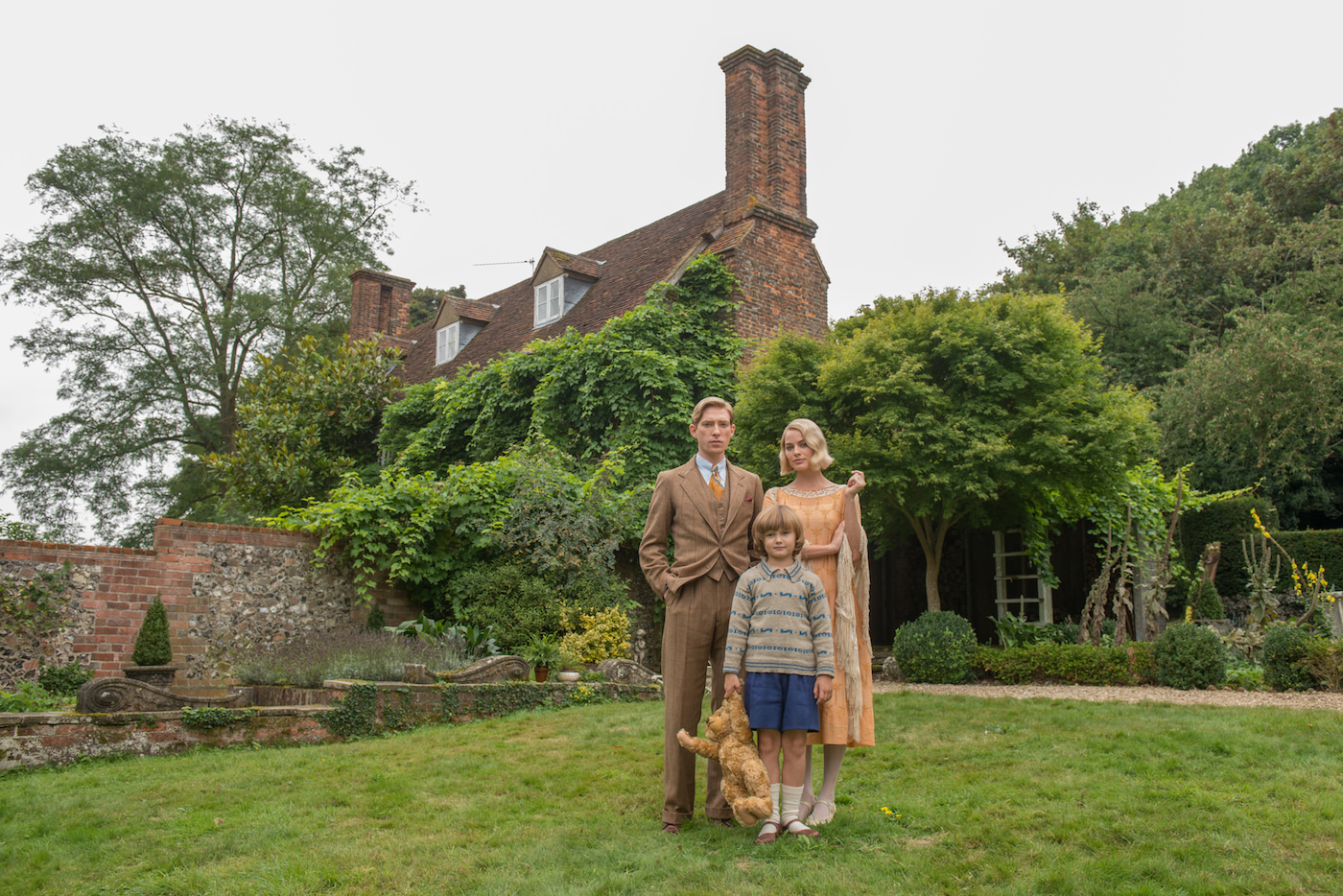 As the story points out, largely due to his war experiences, Milne sought to distance himself from the possibly rather flippant society of London in the 1920s, the party world. One is also able to view the actual house, again, where they moved to in Ashdown Forest in Sussex. So we all had first-hand knowledge of the environments in which he lived. There was a possibility of using the real house, but the ceilings are so low we realized you couldn’t hold a microphone or put a lamp up, because everybody would bang their heads.

We were lucky to find a house that was almost identical, and hadn’t been changed since the 1930s. We didn’t build anything in a studio. The biggest thing that I did at the country house was make a garden. We built one from scratch, showing it in its run-down days, and as it progressed over the years, as Daphne threw herself into it and decided to make the most beautiful rose garden in England. Emotionally I think it’s rather effective. It reaches its full bloom as they get the terrible news that Christopher’s been killed in the war. Of course it was a mistake, but the beauty of the house makes that scene more poignant. They’d achieved harmony within the family, and then they lose their son. But as I say, fortunately, he comes home!

We filmed in the real forest. I live about 40 minutes from the Pooh forest, in Brighton. I’ve often walked across the terrain where it all happened, you can visit the famous Pooh Sticks Bridge, and this little clearing in the trees which Milne called the edge of the world. You walk through the forest and then there’s a little opening with an extraordinary view across miles of England, and that’s still there. What I had to do was restore the landscape to be more as it was in that day, because there were so many visitors to Pooh Sticks Bridge and the final site of what I call the Pooh walk, it was all crumpled down. We brought in trees and ferns, and covered the bridge in moss. We made it as it was in their day, when it would have been a wild wood. We took it back to its natural state, I suppose. [In reality,] it was a private wood then, but they knew the owner so they were allowed to walk in it. 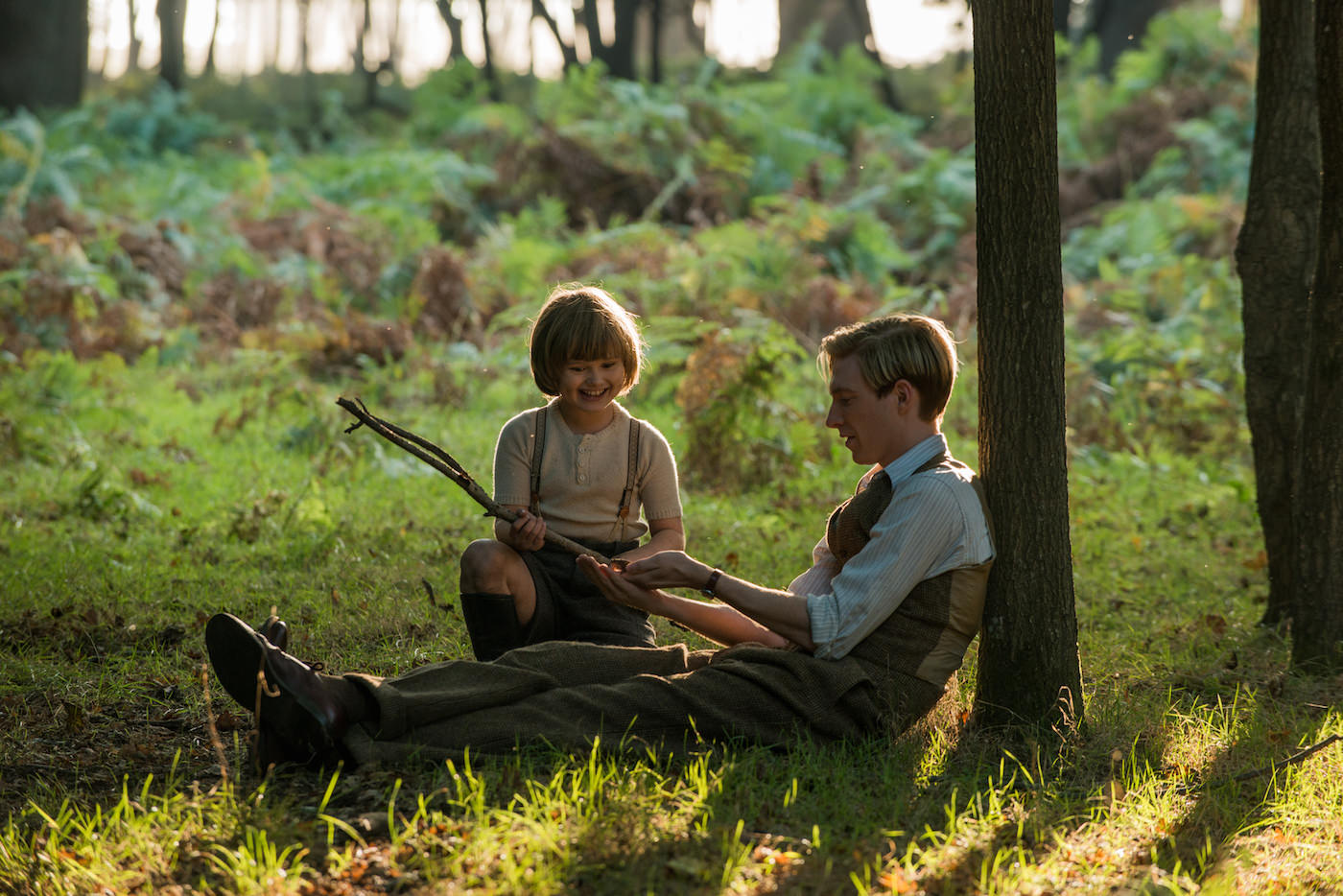 What else did you use for historic inspiration?

We built our own First World War trenches because obviously you need to do that. We used the Savoy Hotel, which is where Milne’s plays used to be put on, which is unchanged. We do go to New York in the film briefly, but that was really an art deco building in the middle of London. We didn’t move around a lot actually, it was really those two houses. We found an old circus store on the outskirts of London that’s about to be turned into flats. We got there in its last week. We got lucky, locations seemed to fall into place.

How did you approach the books’ the iconic toys and drawings?

The biggest thing was making the toys, actually. We had to be very careful as we don’t own them. It’s copyrighted, so it’s making it look like the toys but not be the same, as they’re licensed to a rival film company. They’re making their own Christopher Robin film, but they’re not really in competition, ours is more a serious drama about the family. But we thought, we can’t do the story without the toys. The one toy that’s not owned by anybody is actually Winnie the Pooh. the company that made the bear, which was sold at Harrods originally, went bankrupt and the paper patterns were bought by a little teddy bear factory in Shropshire, and they’re the only ones who are still allowed to make Winnie the Pooh bears, Merriweather Bears. So we commissioned them to make all our Pooh bears, which was great, so they were very happy. They’ll probably find their sales going up. It was quite nice to find a tiny teddy bear factory in Wales. 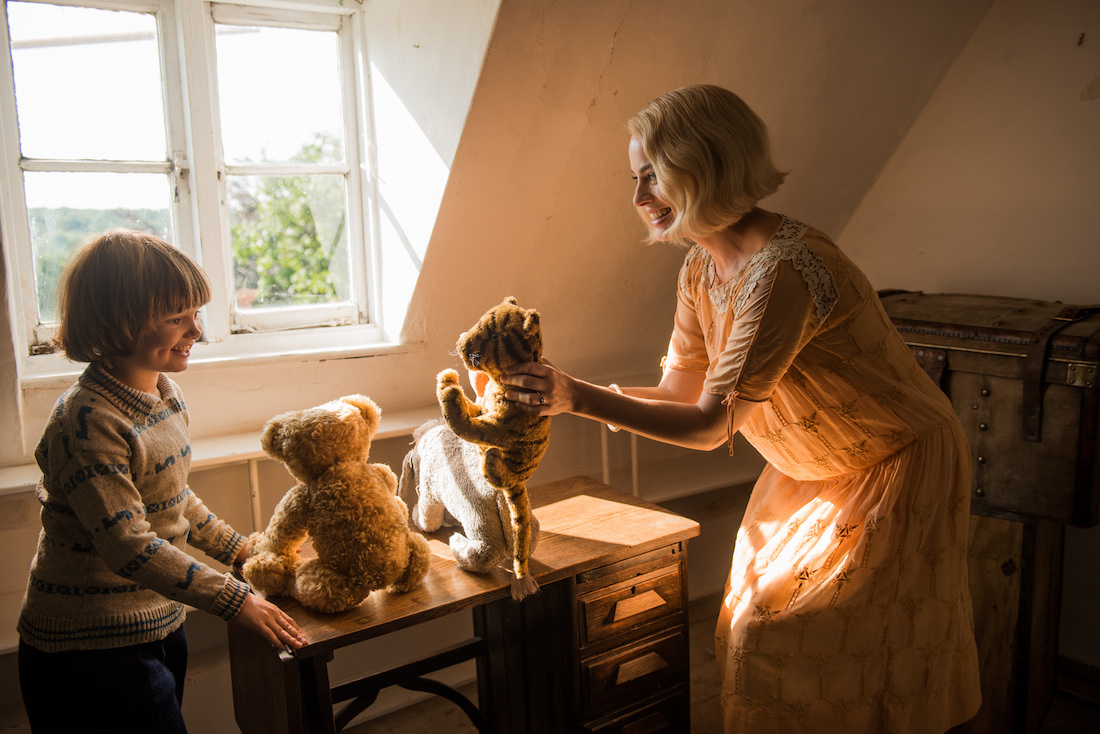 The other thing we couldn’t use were the  original drawings, because they’re all copyrighted, so I drew them in the style of Ernest Shepard, and those are the ones you see on screen. It’s a bit tricky because some of the images are so famous, and people want to see the thing, but you just change things around a bit, the cushions and things like that. It was quite nice doing that really, but a sort of responsibility, because you’re aware these are very iconic stories and pictures, and you can’t really put a note on the screen saying ‘this picture’s wrong as the real one’s copyrighted and I’m not allowed to draw it.’ I’m fully expecting to get letters saying that ‘this thing’s wrong,’ as the stories are so beloved.

Given that so many locations from the Milnes’ lives are still standing, from the 100 Acre Wood to the bear enclosure at the London Zoo, was it a unique experience in your career to shoot a period drama in the spots where it took place in real life?

Well, it depends how far back you go. I’ve done a lot of Dickensian stuff and that’s quite hard to shoot now in London because everything’s been developed. I did a film about the Bloomsbury Circle at Charleston House, [about] Virginia Woolf and her family, and there we were able to film in the real places because they’d been preserved. But generally, it’s hard to find anything and you have to recreate it. This was particularly satisfying, and I think the end of the film, when the boy is there with his father, you think, that’s where they were. It’s quite moving in a way to think it actually happens.

On the topic of your Victorian era to early 20th century period work, how did Christopher Robin compare to Jonathan Strange and The Nightmare Worlds of HG Wells?

The Nightmare World was a stylized piece, we did them all in a studio on a stage and there were four short stories. They were elemental, with props hanging in the air. It was a sort of conscious, stylized thing, maybe to reflect it was all in [the main character’s] mind. It was more a theatrical style than a cinematic one.

And then Jonathan Strange was, well, of course that never happened, we weren’t looking for where it happened, but it was rooted in reality with magical adventures, I should say. That again, we didn’t build anything in a studio…we filmed that in Yorkshire. We found an empty mansion, and actually, it’s the largest house in England, and that gave us a whole range of locations, from houses of Parliament to streets of London. We do go abroad in that film of course, so we had to do Venice, which was just too impossible really. It’s just so crowded. We didn’t have the budget to close the Grand Canal for two weeks. We went to Croatia, which used to be run by the Venetians, and they have little islands that look like Venice, because they used the same architects. We went to Canada to film war scenes, because we had to do the Battle of Waterloo. They have an experience of a Napoleonic wars, and people who do war recreations, so we built the Battle of Waterloo in Canada.

And of course there’s an ever bigger CGI element in filmmaking now. So the magic bits were CGI, obviously, but 80% was real. We had a big exploding mirror and we actually put detonators behind the mirror, and it did explode, rather. I’m not sure if I’d do that again; it was rather alarming, but it’s always nice to do it for real if you can, I find.

In Christopher Robin we didn’t really do CGI. We had a magical moment where it turned into winter in the forest, but we covered it in fake snow, and played the film backward as the snow goes away at the end. It’s a very old fashioned technique, and the snow flies away. Sometimes, the old tricks are just as good.