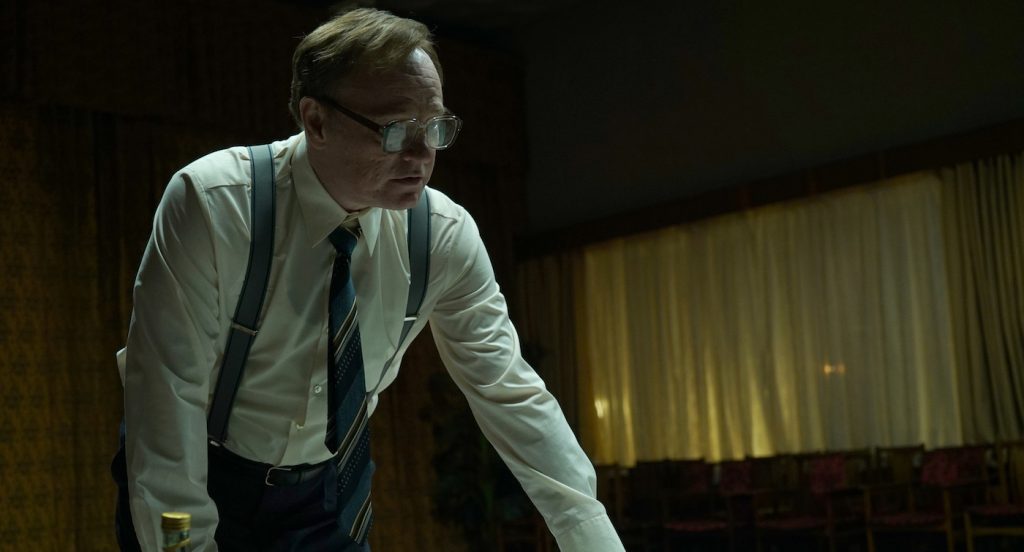 It’s the lies told throughout Craig Mazin’s five-episode series Chernobyl that get you. After all, most anybody watching the HBO program set in today’s northern Ukraine will already know that the Soviet nuclear plant exploded in 1986, the area was eventually evacuated, and the adjacent newly-built town of Pripyat transformed into a ghost city, as did 1,000 square miles of other towns and villages in what’s now known as the Chernobyl Exclusion Zone. But when two local apparatchiks in episode two, with soldiers frantically loading up the radiation-sick all around them, simultaneously try to pass off the accident as under control while presenting a list of (other) people to blame, Western audiences might start to feel a bit angry about this 33-year-old incident, one which still has no conclusive long-term death toll.

Amidst the lying and self-serving incompetence that led to the tragedy, the show’s truth-seekers are nuclear expert Valery Legasov (Jared Harris), who was chief investigator of the Chernobyl disaster, and Ulana Khomyuk (Emily Watson), a fictionalized nuclear physicist meant to represent the dozens of actual Soviet scientists who fought to discover and expose the course of events that lead to the reactor’s meltdown. Legasov is assigned to work with Boris Shcherbina (Stellan Skarsgård), a Communist party higher-up whose general competence and interest in factuality grow in tandem over the course of dealing with the disaster’s aftermath.

The show opens with Legasov’s suicide, on the second anniversary of the explosion. Just before he hangs himself, the scientist passes off a set of tapes to an unseen actor. Chernobyl illustrates what those tapes presumably contain, which at times is far different from the official Soviet account. As Legasov, Harris depicts not just the scientist’s determined technical brilliance, but his internal struggle to break with what is expected of him in a state where deviation has no place. At the show trial of the three men deemed responsible for the disaster, he masterly connects the disaster to the foundation of lies on which the Soviet political apparatus runs. But shortly before, we see Legasov commended by the KGB chairman for toeing the party line so well in Vienna, where he has presented an unseen but presumably rather different version of events.

Chernobyl seeks to present a legitimate chronicle of the decisions and events that led to this tragedy, but the show is also about the strength and sadly, the futility, of seeking verity and change in a state that views humiliation as a bigger disaster than thousands of radiation deaths. We had the chance to speak with Harris on portraying Legasov, a once little-known entity from the crisis, about the scientist’s deliberate obfuscation, how the show’s semi-fictionalized character might differ from his historical counterpart, and what parallels the actor sees in the Chernobyl disaster today.

Given that aspects of the Chernobyl explosion are still shrouded in secrecy, how did you decide to take on this role, and what kind of research did you do to develop the character?

There’s actually quite a lot of information available about this. Legasov in particular though—there’s not a lot of information about him. In the show, there’s a scene where Charnov [the KGB chairman, played by Alan Williams] says they’re basically going to erase Legasov from the story, from the narrative, and they pretty much did that. Even if you look at books written by Western authors about the accident, there’s barely any mention of him at all. I do research on every role that I play, and sometimes it’s biographical, because they’re real people, and often it’s more to do with cultural research that helps you put your mind into the time and place that your character exists in.

This was one of the few times that I found that research wasn’t particularly helpful, in terms of the biographical detail, because Craig needed a slightly different story arc for this character. But in terms of the truth about the essential nature of his involvement, and the authenticity of the role that he played, that’s all completely accurate. And of course, it’s necessary to do a deep dive into the science so you understand what you’re talking about. You have a crash course in nuclear physics.

Was it possible to find or access the autobiographical tapes Legasov recorded?

I tried to find those and looked for translations. I went down some deep rabbit holes on the Internet, but in the end, I wasn’t successful. There’s footage of him speaking in Vienna, I looked at that. At the end of the day, one of the things I didn’t find useful was that Legasov, the one that I could see, looked like he was an alpha character. Like he was extremely confident in terms of his knowledge and his status within the Soviet hierarchy. As someone who was an expert in atomic sciences and nuclear physics, he would have had status within the Soviet machinery. I think that in our story because his arc was in contrast to the Shcherbina (Stellan Skarsgård) character, you’d have had two characters occupying a similar space. I needed to occupy a different space to provide that contrast to Stellan’s character. But there is footage of him out there. There’s also very moving footage of his daughter talking about him.

What did you think about the creative decision to present Legasov as something of a loner, when he had a wife and child?

What you’d have had to have done was include scenes and dealt with either phone calls back to the wife—“when are you coming home, can I speak to Daddy on the phone”—all those kinds of scenes which are fairly typical in disaster stories and in themselves are slightly cliché, you know what I mean? They also stop the forward momentum of the narrative. I think that Craig wanted to tell the story of this disaster. It’s very propulsive in that sense. It starts immediately and it’s like a freight train, it moves forward with such incredible momentum.

When we were in the first week that I shot, it was in Legasov’s apartment. There was a discussion about whether or not there were going to be photographs representing that part of his life, and I said, I don’t see how that helps, because it’s just not part of the story. Necessarily, because it’s a five-hour telling of a two-year event, you have to fictionalize certain things and telescope certain events. It’s not a documentary, it’s a fictional story of a real event. You stay authentic by remaining true to the events and contributions these people made, but you must contrast certain events, or you’d still be watching the show right now.

When we see Legasov get more into step with the behavior of party higher-ups, are we seeing him doing this with intention, to get what he needs, or simply out of habit?

The reality of that situation was that you didn’t have a choice. It was a one-party state. If you wanted to thrive within that world, you were part of that machine. In that sense, he was aware of the circumstances that he was operating in. Everyone is complicit, if you like, even down to the miners. That introduction to the miners is where they’re telling a joke about the Soviet apple cutting machine that’s supposed to cut an apple down to four pieces and cuts it to three. They all understand the system that they’re in.

I think that one of the takeaways for me from the whole thing was that there’s a certain danger that starts to happen when a cynicism exists about the understanding that you’re involved in a political system where you have no effect upon its outcome. You stop expecting that you’ll be able to hold power to account. In this particular circumstance, how I certainly understood Legasov’s evolution was that the situation they are in is so dire that he has to break ranks. He has to call attention to how serious it is, even if it means putting himself at risk. He understands the severity of the situation and he has to speak up and he has to try to effect positive outcomes. Certainly, in our story, it wasn’t a role that he was looking for. I was interested in that reluctant hero story. He isn’t somebody who ever imagined himself in a situation where he’d take on that kind of a burden. Obviously, the more traditional story that we hear is that people leap into the fray, and there’s no question about their heroic commitment. I liked the idea that this was someone who, at every step, wrestled with that choice, because he’s aware of the consequences.

The series feels not just like a reckoning with a past, but a warning for the present. Do you see it as such?

There are things in the script, obviously, that are immediately apparent. This is about the relationship of the individual to the state, and no matter what that is, we all have that relationship. But this was a very different system to the one that we have. I think there are several different parallels you can take away when you look at the story. One is a political situation, but I would say that the more immediate one, a scientific one, is that this is an ecological disaster. And we are constantly dealing with the information about the climate situation we’re in right now. You have students who went on strike—that’s their future that they’re looking at. And right now, there’s a lack of political will to address it. It’s an immediate concern.