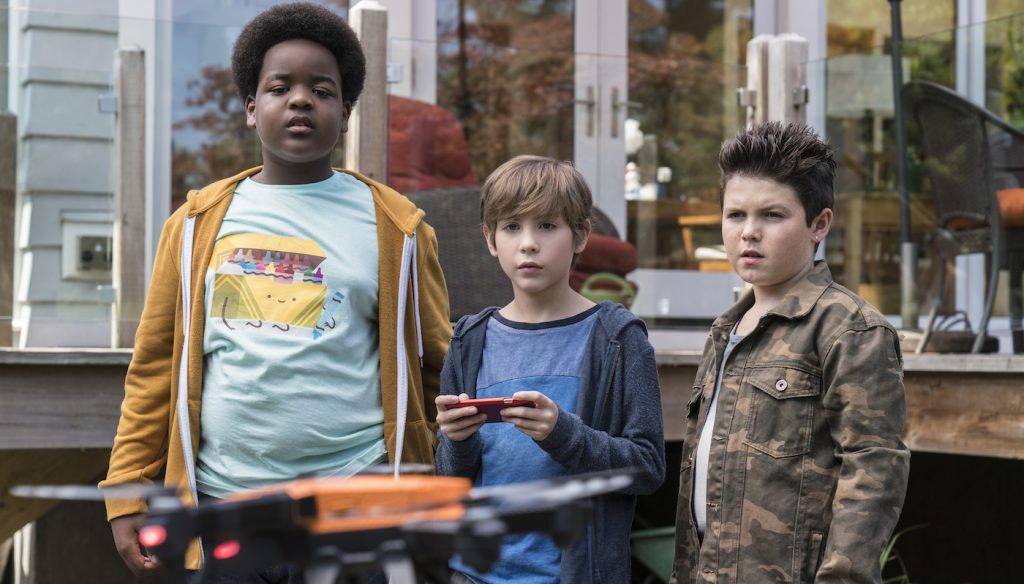 Co-writer and director Gene Stupnitsky’s Good Boys is a new comedy that focuses on that age-old conundrum; what to do when the drone you’ve “borrowed” from your dad to spy on a couple of kissing teenagers gets destroyed, and your attempts to replace it lead to a series of cascading catastrophes? 12-year-old Max (Room‘s Jacob Tremblay) and his buddies are due to attend their first “kissing party,” but they’ve got no idea how to kiss. Thus Max and his best friends Thor (Brady Noon, HBO’s Boardwalk Empire) and Lucas (Keith L. Williams, Fox’s The Last Man On Earth) deploy the aforementioned drone—which belongs to Max’s dad (Will Forte)—to spy on a couple of expert teenage kissers next door, with the resultant destruction of the drone, the mad dash to replace it (they skip school), and the odyssey of misfortune that follows (think stolen drugs, paintball, cops, and teenage girls).

Such is the premise of Good Boys, which is a little bit Ferris Bueller’s Day Off, a little bit Superbad, and a whole lot of pint-sized hijinx. Considering two of the film’s producers are Seth Rogen and Evan Goldberg, Superbad and Pineapple Express co-writers, you can expect a lot of ribald comedy in Good Boys. For script supervisor Patti Henderson, Good Boys’ humor presented major challenge thanks in part to the comedy flying hard and fast. If you’re not sure precisely what a script supervisor does, you’re not alone.

“We’re kind of shadow people,” Henderson says. “We’re around, but people don’t really know what we do. It’s the weirdest thing. Even in the crew will sometimes say, ‘I’ve always wondered what you’re doing.'”

The script supervisor, in Henderson’s apt explanation, is the “on set representation for post-production,” because it’s her job to make sure the film’s story, we’re talking about every single scene, is able to be cut by an editor after. “We’re kind of the conscious of the story,” Henderson says. “We track everything and make sure the story is making sense, and that the continuity is making sense. Because we don’t shoot in continuity with story order, you’re always matching things with scenes that haven’t been shot yet, so you’re conscious of props, wardrobe, all of it. I always think of our role as being a middle cog. We know everything that has been shot, and everything that hasn’t been shot. We’re the ‘Just the facts’ folks.”

Keeping track of all that has and has not yet been shot, as well as every line of dialogue (and every prop, and every piece of wardrobe) that has been filmed is not for the faint of heart. Every take needs to match so that the editor and director can choose the best one in post-production without worrying that it won’t make sense with what’s come before or what will come after. “It’s an interesting job for people who are great multitaskers,” Henderson says in a massive understatement.

The script supervisor has to talk to every department, as well as the actors. She literally keeps everyone on the same page. This often means pointing out when things aren’t correct, which requires a level of diplomacy, too.

“Often what you’re saying is, ‘I hate to state the obvious, but…’,” Henderson says. “It’s often not good news. If someone didn’t use the correct hand in a take or say the right words, or their hair was wrong, I have to step in. I’m stating things that aren’t making people feel positive, so you have to address it in a way that doesn’t make people unhappy.”

With Good Boys, Henderson was dealing with a young cast. Adding yet another level of complexity was the fact that director Stupnitsky and his co-writer Lee Eisenberg are alums of NBC’s The Office, and are very fond of throwing a lot of different variations on a single scene, or a single line of dialogue until they find the absolute funniest one.

“Because it’s this style of comedy that Gene and Lee were creating, like The Office, you have these alternative lines that they’d give to each character,” Henderson says. “This kind of comedy is all about options when you get to post. So with the three boys always together, if we give an alternate line to one boy, the other two are going to have to respond.”

Every alternative line creates a new kind of parallel film in which the other boys in the scene are now reacting to the new dialogue in different ways. Henderson has to track all of this, every iteration, and know who said what, when, and who said what, after. “It’s a lot more paying attention and making sure I got down what was said, and what everyone else said to the new line, so we could do all the necessary coverage so that it will make sense if they wanted to use that sequence of lines in post. It was very challenging.”

One of the great things about the younger actors is they took their time with the alternative lines, giving Henderson more wiggle room to make sure she was tracking everything. This wasn’t the case with the adult actors.

“I found the most difficult was when we had the adult comedians in because often they could just riff, and I just had to catch it in case they thought that was funny,” she says.

Then there’s another thing that makes a script supervisor’s job even tougher today; technology. It used to be that you could only shoot so much in a given day, considering the time required to change film reels. Obviously, that’s no longer the case. “We can shoot for 20-minutes straight if we want, which means everybody is working intensely hard for that 20-minutes, and 20-minutes of dialogue is a long time to take notes on,” she says. “Everybody does things unconsciously, they’ll try something in a take that doesn’t match another take, and all of a sudden you’ve done a scene ten times and each time they’ve done something a little different, so you have to figure out what you’re matching to.” Yet no matter how advanced the technology or complex Henderson’s job becomes, one thing hasn’t changed since the very beginning of filmmaking. “At the end of the day, it’s the best performance that rules.”