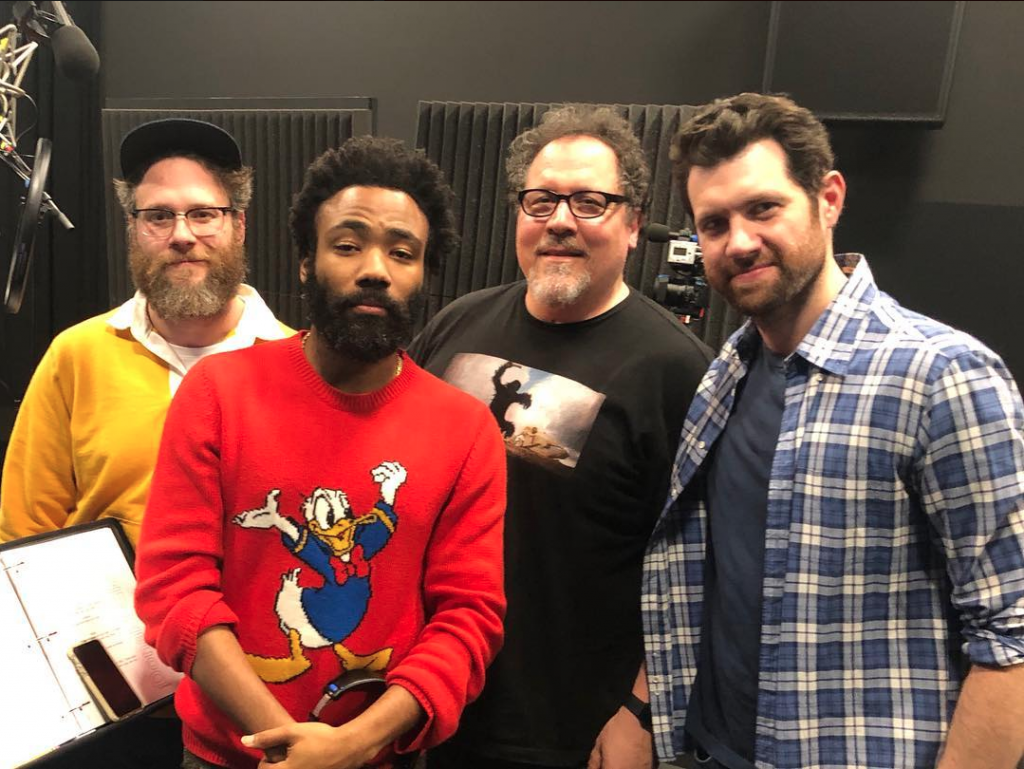 This cast photo from The Lion King will give you those ‘Hakuna Matata’ vibes all day long. Seth Rogen, Donald Glover, Billy Eichner, and director Jon Favreau had no worries as they posed in the recording studio together.

Rogen shared the photo on social media yesterday of the live action voice actors. Glover will star as Simba, the young heir to pride rock. Eichner and Rogen will play the lion’s jovial friends he meets in exile, Timon and Pumbaa. If all three actors were together in the studio, it’s likely this photo was taken the day they recorded the show-stopping song Hakuna Matata. The breezy anthem is a fan favorite from the original Elton John and Tim Rice score. We can only imagine the hilarious dimension these guys are adding to the scene.

The photo has some major Hollywood heavy hitters, but the real star of the candid is Glover’s sweater. The knitted pullover pays homage to Disney history featuring an energetic animated icon. Donald Duck has never looked cooler. Seriously, where can we get one of those?

The Lion King rounded up one of the most talented casts we could ever imagine. Not pictured here is Beyonce, Chiwetel Ejiofor, Keegan-Michael Key, Alfre Woodard, John Oliver and more. Yeah, we weren’t kidding. Here’s hoping that we can get a full cast photo soon, please? Better yet, this is putting us in the mood for the cast recording. We cannot wait to get our ears on this soundtrack.

Iron Man director Jon Favreau was an early pioneer of the Disney film remakes. He brought The Jungle Book to life in 2016. The VFX heavy spectacle was truly gorgeous and a stunning adaptation. The Jungle Book featured human actor Neel Sethi as Mowgli, but The Lion King will likely be CG animals only if the story follows the 1994 original.