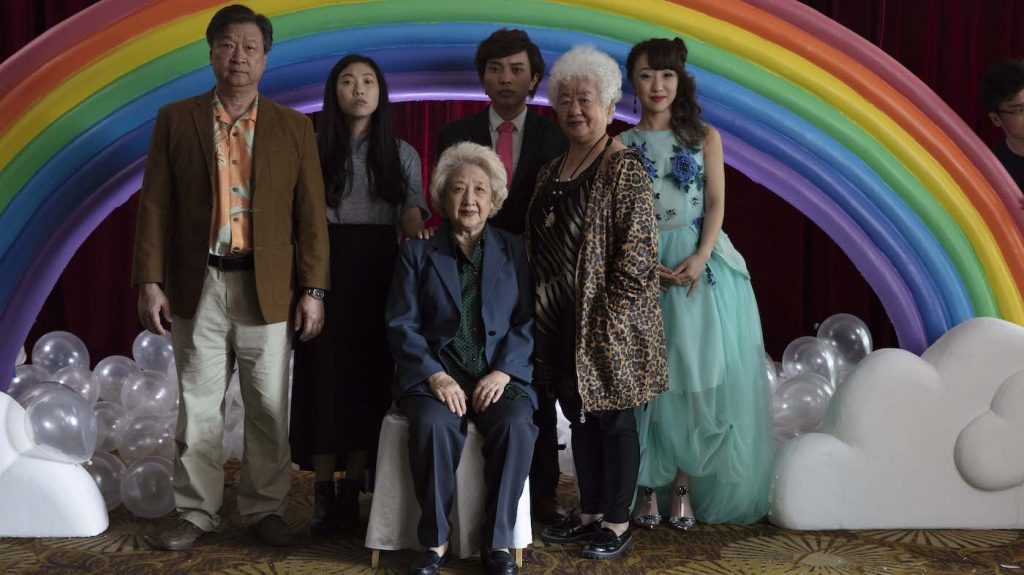 The Farewell’s Writer/Director Lulu Wang on her Breakout Film

Narrative feature The Farewell, from writer/director Lulu Wang, is based on her own experience with her family dealing with what is called a “good lie.” As is Chinese tradition, they decide to keep grandmother Nai Nai in the dark about her diagnosis of terminal cancer. A wedding is orchestrated as an excuse for the family to come and see her from all over the world. Central character Billi, played by Awkwafina, is the fictionalized version of Wang, who flies from New York to see her Nai Nai for what is likely the last time, all while pretending everything is fine. Wang takes this story, which sounds grim, and fills it with joy, humor, and love. The Credits spoke with Wang about casting the film, balancing tone, and finding humor in the darkness.

What were some traits or qualities you wanted to make sure to capture in members of your family?

It’s difficult with family and people that you love, trying to characterize them. I wanted to be really thorough, and encapsulate every aspect of them, but at the same time, it’s a 90-minute movie. I had to hone it down to specific qualities that contributed to the drama, or the tension of this particular event. For example, my grandmother is very much the matriarch, and very strong, and likes to be at the center of everything and boss everybody around, so that was an interesting aspect of her to explore. Zhao, the actress who plays her, did an amazing job because you really believe that this is a woman who wants to run the show, but there’s only one thing that she doesn’t know. She’s really sick, and probably shouldn’t be running the show. So I explored that as a way to mine for the tension around the lie. With the father, I wanted to explore a lot more than I could. My father speaks fluent Russian and lived in Moscow for ten years. He was a diplomat. None of that got into the movie. Instead, I put him on a bed in underwear, which is not very dignified. Luckily, he’s not offended by that.

You worked with casting director Leslie Woo in creating this great ensemble. How did it come together? What was the casting process like?

With Tzi Ma, I always knew he would play the dad, or at least I hoped so. He’s become such an icon in American culture, and we’ve all seen him in so many movies. In a way, he’s like everybody’s Chinese dad. He’s very recognizable. He has such a warm face and such a great sense of humor. He feels very Asian-American, of course, but someone who is very assimilated into American culture. Tzi himself grew up in the US, which fits how my father was raised.

Awkwafina was not the most obvious choice, because, at the time, she hadn’t done any lead dramatic roles. Not only that, it was before Crazy Rich Asians and Oceans 8, so I didn’t know her from her acting work. I knew her from her music videos. I was told I should meet with her because she really resonated with the script. We met, and she told me about how personal the story was for her. She was raised by her Chinese grandmother and studied abroad in Beijing, the way I did. She sent in a self-tape. Leslie and I looked at the tape, and she was amazing. She embodies the role. It doesn’t feel like she’s acting, especially in the moments when she’s not talking, when somebody’s reading lines off-screen, and she’s just listening, you can really see the nuance of her emotions on her face. Those were the two roles we cast first, and everybody else we cast in China, through our Chinese casting director.

Zhao, who plays Nai Nai, came to us very late in the process. We’d been looking for a long time. We were under pressure to find someone quickly because we were two weeks away from the start of production. I saw Zhao’s work, and I called her myself and begged her to do it. Her fees are very high because she’s a very well-known soap opera actress in China. We couldn’t afford her. I had to call and convince her. I told her she would be the person who was representing my own grandmother, and it’s very personal and would mean a lot to me, so she decided to do it. In real life, she’s very sweet. She’s not like my grandmother at all. I had to actually bring that side out in her, to be more bossy and demanding.

I think it’s really important for those who hear about this movie to know it has a lot of funny moments. You really found a great balance. How did you inject humor in it, and maintain the right tone?

I had set out to make a comedy, but I knew it wasn’t going to be a broad comedy. It wouldn’t come from the actors, and it wasn’t always on the page. If you read the script, in the scenes, you wouldn’t necessarily think it was funny. There’s a tendency to think more jokes in the script are needed, but I always knew I would find the humor through camera and framing composition, and just through the juxtaposition of what else was happening in the scene, and in the frame. One of the reasons we used these wider frames was I wanted to have layers of things happening, so that there was always context to what was happening. Somebody might be having a really serious conversation, but in the background something really funny is happening, and so you’re able to feel both things. You feel the intensity of the conversation of the main characters, but you also feel that juxtaposition of what else is happening in the room that’s silly, and that’s true to life. Also the other way around, you might be with the characters really enjoying a joyful moment between the characters. Then something comes in that reminds the characters of why they’re all really there, and of the loss they are all doomed to face. As soon as that reminder hits, it sucks the joy and the air out of the room.

One of the most compelling aspects of the film is how it captures loss, especially from illness, in which often both absence and presence is felt. In The Farewell you’re showing ways we deal with grief while the person is still alive.

I think I was able to dig deep into those emotions because I didn’t hinge the movie on plot points. I didn’t look for ways to make it more dramatic by having more things happen. It sort of felt like the emotions were dramatic enough. It was just about figuring out how to portray those things visually. The entirety of the second half of the movie, I think a lot of what the characters are doing, especially Billi, is finding ways to avoid the inevitable, which is saying goodbye. We create all of this drama. We fight with our family, worry about what is right or wrong because it keeps our minds busy when we’re trying to figure things out. The reality of life, though, is oftentimes there’s nothing to figure out. You just have to accept and let go. A lot of the movie was me just figuring out how to say goodbye. What does that feel like? How do you avoid saying goodbye? How do you deal with it in the inevitable moment?

The Farewell is in theaters now.