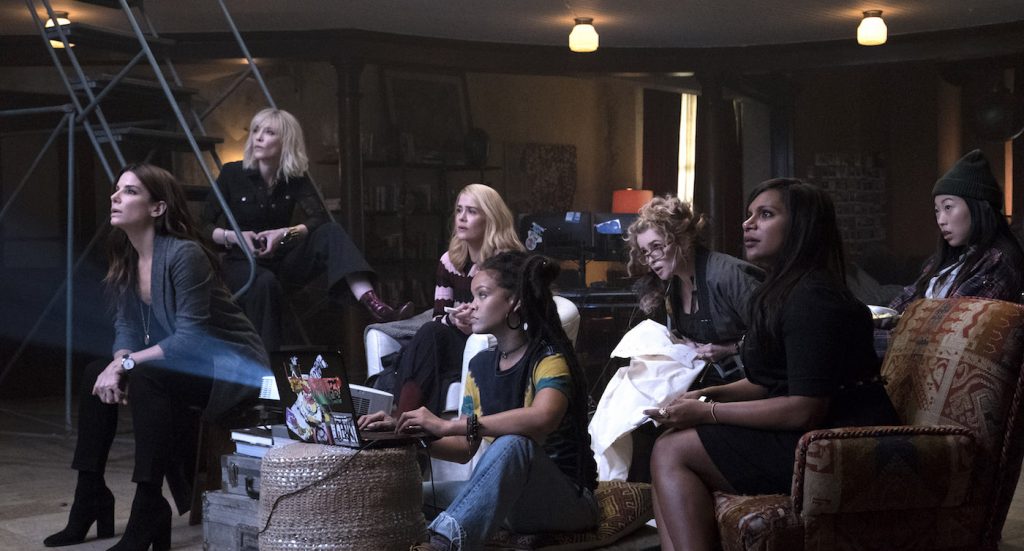 Alex DiGerlando made his reputation as a production designer when he conjured the gritty swamp vibe for 2012’s Beasts of the Southern Wild. DiGerlando followed that stunning achievement with his spooky evocation of rural Louisiana subcultures in the first season of True Detective. Heist movie Ocean’s 8 represents a radical shift in milieu for the NYU-educated production designer. Working with director Gary Ross, he presents a high-fashion vision of Manhattan centered on the Met Gala as backdrop to the theft of a $150 million diamond necklace orchestrated by Debbie Ocean (Sandra Bullock) and her crew. DiGerlando says, “To me, Beasts and True Detective were more about texture. Ocean’s 8 is about style. It’s a different part of the brain.”

The big set pieces in Oceans 8 take place at the Metropolitan Museum of Art. “We got pretty much unprecedented access to the Met and shot there for nine or ten nights,” DiGerlando says. “Typically when someone shoots a movie there, everything has to be pulled out before the museum opens in the morning and then brought back after it closes. There would have been no way to pull off the transformation of the great hall.” Instead, he explains, “We worked out a plan with the Met to leave certain items so they wouldn’t be in the way and the museum could still operate. Not an exaggeration, we had a minute by minute breakdown of everything that was happening at any given time. One of my art directors was dedicated solely to making sure nothing slipped through the cracks. It was a great privilege to enjoy that space all to ourselves.”

DiGerlando’s elegant recreation of a Met Gala fund-raising dinner for the Costume Institute was filmed in the museum’s actual Temple of Dendur, but the movie’s most spectacular setting, a European royalty-themed exhibition of 18th century dresses, was built from scratch on a sound stage in Long Island. “It was a huge set involving water and priceless dresses inspired by these beautiful images of mirrored walls in the Palace of Versailles.” To mimic the shimmering antique mirror environment, DiGerlando’s scenic department applied silver leaf to the back of Plexiglas. He says, “Between the gold leaf of the molding and filigree and the silver leaf, I don’t remember the exact figure but it an ungodly amount of leafing used to create that effect.”

DiGerlando’s other big build involved the literal den of thieves belonging to con artist Lou (Cate Blanchett). Using the annex of Brooklyn’s Bushwick United Methodist Church as his starting point, DiGerlando transformed the space into a bohemian hideaway. “The fun of the ‘Oceans’ movie is that every scene feels effortlessly cool,” DiGerlando observes. “In his script Gary described a warehouse, because ‘Oceans’ movies always end up in some kind of warehouse that’s sort of like a clubhouse. Everyone dreams about having the ultimate loft, so we decided to really go for it and create this vast space for Lou that has a DIY kind of vibe. Our thinking was that people who choose to live this way, as con artists, are usually very creative.”

Most of the other settings in Ocean’s 8 were shot on location. They included the offices of Vogue Magazine, where Anna Wintour’s signature haircut makes a cameo appearance; Erin Saarinen’s iconic TWA Terminal, which houses the stewardess-themed fashion show from down-on-her-luck designer Rose (Helena Bonham Carter); The New York Times building, invaded by sneaky hacker Nine Ball (Rihanna); and the Cartier Mansion on Fifth Avenue, which opened its doors to the filmmakers shortly after completing a two-year renovation. DiGerlando says, “They were super-excited to get it immortalized on film so for two days we were able to shoot almost every nook and cranny of the building.”

In the earlier ‘Oceans’ movies, Las Vegas infused the criminal hijinks with an air of glamor and fun. DiGerlando aimed to do the same for Manhattan in the 2018 version. “The whole idea was to curate a poppy version of New York,” he says. “This city is so familiar and it’s been filmed so many times, but we wanted to put a different spin on it and give it this energy. It was a fun challenge to piece that together through locations.”