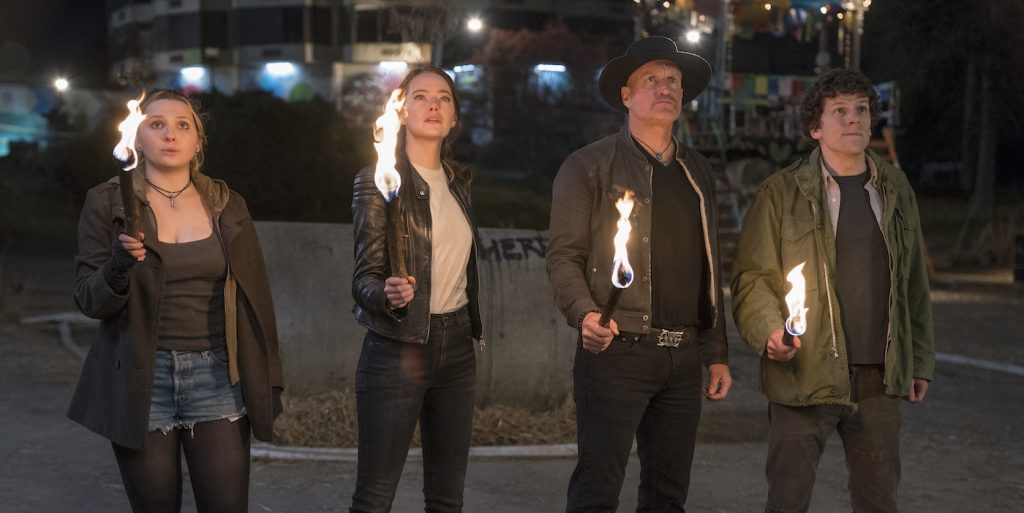 The gang is back, and this time, they’ve found an even more suitable place to while away their non-zombie-killing moments—the White House. Director Ruben Fleischer returns, along with his core zombie-killing cast of Emma Stone as Wichita, Abigail Breslin as Little Rock, Woody Harrelson as Tallahassee, and Jesse Eisenberg as Columbus in Zombieland: Double Tap. The last time Fleischer and his cast were together, they gave the zombie genre a major jolt with the original Zombieland way back in 2009. Suddenly, living in a zombie apocalypse looked sorta fun. Now Sony has released the first trailer for the sequel, and it packs the humor of the original with some excellent new additions to the cast.

Double Tap will present our heroes with much more troublesome zombies. One of the joys of the original was how Harrelson’s Tallahassee taught his young charges the joys of killing zombies—they’re slow, dumb, essentially target practice. In Double Tap, however, Fleischer has assured us that the zombies have evolved. He told Entertainment Weekly that the crew will be facing off against “the T-800 zombies, that are stronger, faster, harder to kill.”

This first trailer keeps those Terminator zombies hidden from view, but it does offer the chemistry between the four leads that made the first Zombieland such a hit. It also introduces a few new characters, like Zoey Deutch’s Madison, who joins the crew and immediately stirs up feelings in Columbus. Then there’s Rosario Dawson’s Nevada, who seems to be just as tough as Tallahassee, if not tougher. We won’t ruin the introduction of Luke Wilson and Thomas Middleditch’s characters, which is the funniest part of the trailer.

Behold the Zombieland: Double Tap trailer below. The film opens October 18th and also stars a couple of legends in Dan Aykroyd and Bill Murray, as well as Avan Jogia as a hippie appropriately named Berkely.