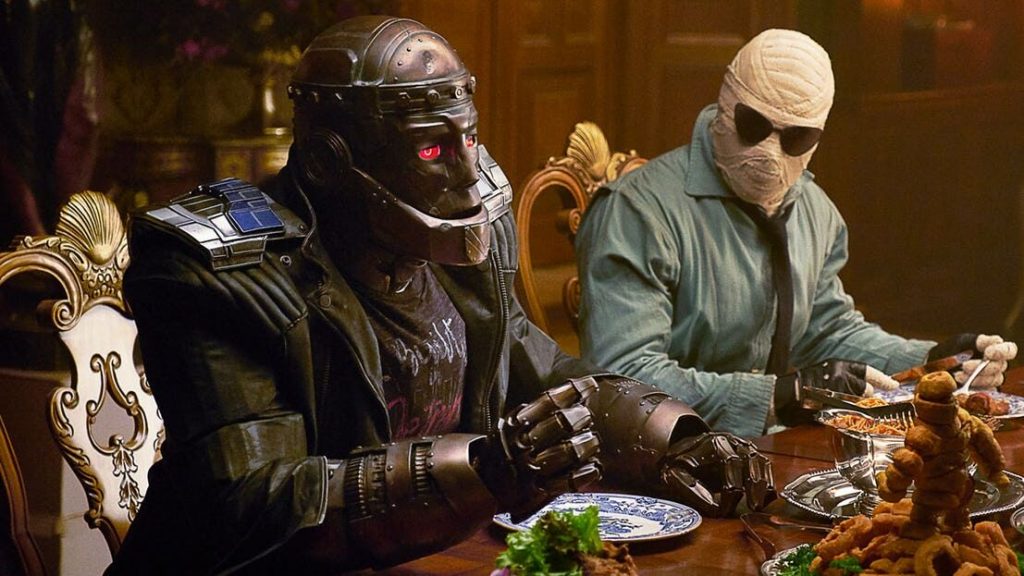 The members of the Costume Designers Guild who joined the panel at San Diego Comic-Con hope you watch their shows multiple times in hi-def and that you hit the pause button now and then. They have always been obsessed with detail and they have always enjoyed putting little in-jokes and Easter eggs into those details for their own satisfaction and amusement, but for the first time, new technologies have made it possible for the audience to see and appreciate those details as well.

The costume designers are always a highlight of the behind-the-scenes panels at Comic-Con, and this was one of the all-time best. The moderator was April Bowlby, who is not only a gracious and talented actress but a star of one of the series the panel members work on, DC Comic’s Doom Patrol. Bowlby was able to provide a literally inside perspective. What made the panel especially fascinating, though, was that the members of the Guild were able to take us through the process, so that we were able to follow from the original conception to the design to the many steps of fabricating the various versions of the costumes for Stargirl, Doom Patrol, Titans, and Black Lightning.

They need many copies because, as costume designer Laura Jean Shannon, who worked on 2008’s Iron Man and who now works on Doom Patrol, Amazon’s The Boys and the upcoming Stargirl, pointed out, “They play super suits on TV, but they are not actually super suits.” They will get torn and dirty in filming, and one “hero” suit may work for close-ups of the star but might not be strong and safe enough for the stunt person. “We’re constantly repairing.”

Shannon is happy creating costumes for characters in any kind of story. “When your heart is in the work, it’s all about building character, whether it’s real or fantasy. We do our best to tell the story through the costumes.” The challenge with superheroes is that there are “fans who are invested in seeing that we do them justice and we take that responsibility very seriously.”

It starts with a lot of research. They will look at all the different versions of the characters over the years, in comic books, games, and other media. “We have a lot of cross-pollinated source material, and then we give it a twist,” Shannon says. Spandex and a cape won’t do it anymore. “Modern audiences have high expectations. We want a cinematic feel so you can envelop yourself in the life of the character. We’re always trying to innovate.” But that means thinking about how the costume will be put together as well. “We need minds that think like engineers, not just designers.”

Once Shannon’s ideas are complete, the next step is taken by concept artist Gina DeDomenico Flanagan, who creates very detailed drawings that show exactly how the costumes will be made, including the fabrics and textures. “It’s the communication tool,” she said. Not only does her work help reveal who the character is but also what pieces will need to be made. Sometimes there are as many as 20 sketches.

After that, it goes to Sarah Mgeni, assistant costume designer, who has already helped with the research, and Lesley Becerra, director of production creative character engineering, to start getting the costume made. Actors come in for digital scans of their bodies, the 21st-century version of those old dressmakers’ dummy forms. They have to figure out how it will actually work on set. There are fittings and tests. What may look like heavy armor on screen needs to move like heavy armor but feel much lighter for the actors.

The super-suit supervisor is Miracole Burns, whose background was of particular interest to Comic-Con attendees—she was a cosplayer who spent a lot of time making fantasy costumes for herself, so she knows them from the inside out. “I’ve worn those things,” Burns says. “They’re uncomfortable. You have to worry about keeping cool, making sure all the body parts stay covered that need to be covered, that you can still go to the bathroom. All the cosplay I’ve done over the years has really helped. These materials are not made for what we are asking them to do.”

And then come the surprise orders from the writers and directors. “Please don’t kill me,” one told Shannon. “We want to put Robot Man in a swamp.” “We work closely with the stunt coordinators to keep them safe and comfortable,” Shannon said. She told us about tiny details in the costume they did for Robotman, with the letter R on small mosaic-like pieces fitted together like chain mail in his costume. “We never say, ‘No one will notice,’” Shannon said. “Those are the details that help tell the story.”