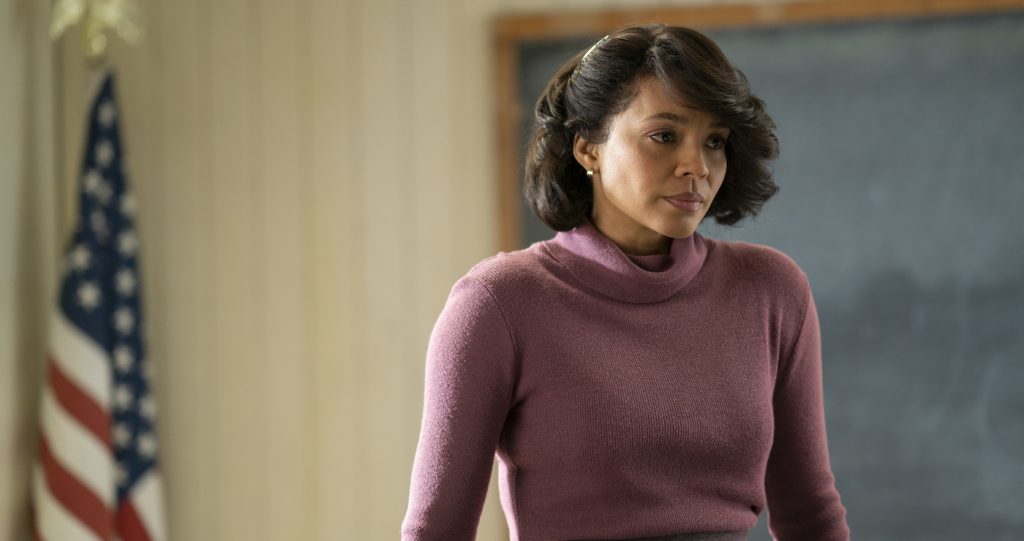 In season three of True Detective, creator and writer Nic Pizzolatto returns to the series’ Southern Gothic roots, with two detectives, Vietnam vet Wayne “Purple” Hays (Mahershala Ali) and Roland West (Stephen Dorff) trying to solve the murder of one child and the disappearance of another in Fayetteville, Arkansas. Hays takes the lead on the case in 1980 and is doing desk work and starting to lose his memory by the time we reach 1990 (West, meanwhile, has made lieutenant). He reunites with his former partner in 2015. By now he’s an elderly man who needs, more than ever, to find out happened to Will and Julie Purcell. Across these three timelines is Amelia Reardon (Carmen Ejogo), whose presence is felt whether in this world or from the next — in 2015, it’s her ghost who guides Hays toward the answers to some of the case’s most enduring mysteries.

Amelia is introduced to audiences as a local schoolteacher and potential love interest to Hays, setting her up to look as if she’ll fall into the tropes complained about regarding women in True Detective’s first two seasons. Instead, she emerges as one of the story’s most pivotal characters even as she segues into the role of Hays’ wife and a mother to two. “I want to be a writer,” Amelia tells Hays at a bar, as the couple start to get to know each other. In between the 1980 and 1990 timelines, she produces a bestseller about the Purcell case, which becomes the conduit to her success as an author. For Hays, however, the case has been his professional downfall. And as the story progresses, it reveals that there’s far more to this particular sticking point between the two than mere marital strife.

Whether shepherding schoolchildren through the detectives’ investigation or pursuing new information on the Purcell case despite Hays’ exhortations, Amelia is the season’s iron fist in a particularly graceful velvet glove. Endlessly more genteel than her surroundings, Ejogo’s Amelia brings poetry to this faded town (sometimes literally, with Hays first glimpsing her teaching Robert Penn Warren to her students) in tandem with her quiet determination to pursue her career and get at the truth. With critical reviews deeming the third season the show’s best yet, we were thrilled to speak with Ejogo about taking on the show’s pivotal role and bringing to it an essential, quiet grace.

You took on the role of Amelia having only seen scripts for the first three episodes. How did you decide to commit, and once you did, what was your process to approach the character?

Well, knowing that Mahershala wanted me for the role was exciting and intriguing to me. I think he had a strong instinct that we were going to work well together and do something unusual with the couple, and that gave me a strong incentive to go forward. Also, speaking with Nic about his intentions with the character, and understanding that he had big ambitions for her, that she really was so deeply fundamental to his more epic intentions for the season — that was also exciting, to know that I’d be the deliverer of that side of things.

On the page, I’m always looking for something that’s a new challenge for me as an actress. There was something about the fact that while this was seemingly conventional in some regards, as to what to expect from this performance in those first three episodes, I was intrigued and excited by the challenge of finding ways to lift something off the page that maybe wasn’t even there yet, and devise a character that was more compelling than maybe even Nic intended.

In her struggle between her needs and those of her family, particularly her husband, Amelia seems timeless. Do you see her as such?

I think there’s something archetypal about Amelia. In some ways, there’s something conventional in that — we recognize her, she’s familiar to us. But for me, it was quite compelling to find a way to present what is archetypal, in a way that preserves its timelessness and what is almost classic about what she represents and who she is. It’s not an attempt at doing something that is of the day or fashionable, or the way we want to see women at this moment in time. There are certain aspects to Amelia that I think are fundamentally female in who she is, and that spans time. To find ways to present that while also remaining relevant to a contemporary audience, so that she still resonates for an audience in 2019, was part of what was exciting to figure out and tease out.

How did you feel about the way the series dealt with aspects of Amelia’s experience as an African-American woman in the south, particularly at the hands of a character like Lucy?

I think what Amelia is having to confront in 1980 is something that any version of Amelia would have to confront in 2019. It’s funny because as much as we think we’ve moved on in certain parts of our society, we’re no further forward than we’ve ever been. As I’m speaking to you now, it’s dawning on me that I could play the same character potentially 20 years from now, or I could play her 20 years earlier than Amelia, in 1960, and it would probably be a similar approach for me as a black actress. Although for certain segments of an audience it may feel that there’ve been shifts, I think for the psychology of someone like Amelia, you could place her anywhere in the last 75 years, backward or forwards in America, and it’d be kind of the same experience that she’s having to deal with. What may be different is her ability to speak up for herself, or not. But even that would be something she’d have to gauge very subtly. I think that in the moments we find Amelia having to handle someone like a Lucy, her approach wouldn’t be that different, whether we sped backward or forwards in time.

Audiences were very moved by Amelia’s character, to the point that early theories extensively tried to connect her to Will’s killing and Julie’s disappearance. Do you read this sort of press, and if so, what was your reaction to it?

I saw a little of it in real time. It was really a strange testament to the fact that Amelia was resonating in a way that Nic and I had always hoped that she would — meaning that the layers of the complexity in which she finds herself, embroiled in the case, the ways in which she is pivotal in terms of relationships and the case, it was starting to emerge as the episodes were going on. It was weirdly cathartic to me that Amelia’s character was truly taking hold in people’s psyches, even if not in ways that ultimately play out.

Right. That early fan theory is wildly off base, if anything.

It is wildly off base, but I think that what’s great about Nic’s writing in this season is that he subverts so many things, and upends so many expectations of so much in the show, including character. To the very end, there was as much talk about “how does she die,” as “is she the killer?” The fact that Amelia had this kind of hold on the audience imagination was very gratifying for me. It’s a very quiet and subtle characterization I was going for. And it was a gamble because working on a show that’s so flashy for so many other characters, you can get lost in that mix. It was very rewarding to realize the choices I made throughout were starting to capture people’s imaginations, and people were compelled by who Amelia was in this season.

I certainly saw her as an anchor or a source of quiet strength.

Thank you. It’s funny, it’s not necessarily on the page in that way. There are arguments, it’s loud, there are things where we could have gone over the top to really make Amelia ring out loud, or I could have made those choices. I’ve played some grander-feeling roles where you really come away remembering that character, and it was a challenge to myself to do something that was true to Nic’s writing, and true to what I knew was the most appropriate approach to the character, which was a much quieter thing. But you know, you take the risk as an actress when you make that choice, to do something that gets lost or doesn’t do what its job is, there on the page. It’s a relief to realize that the approach to the characterization did pay off.