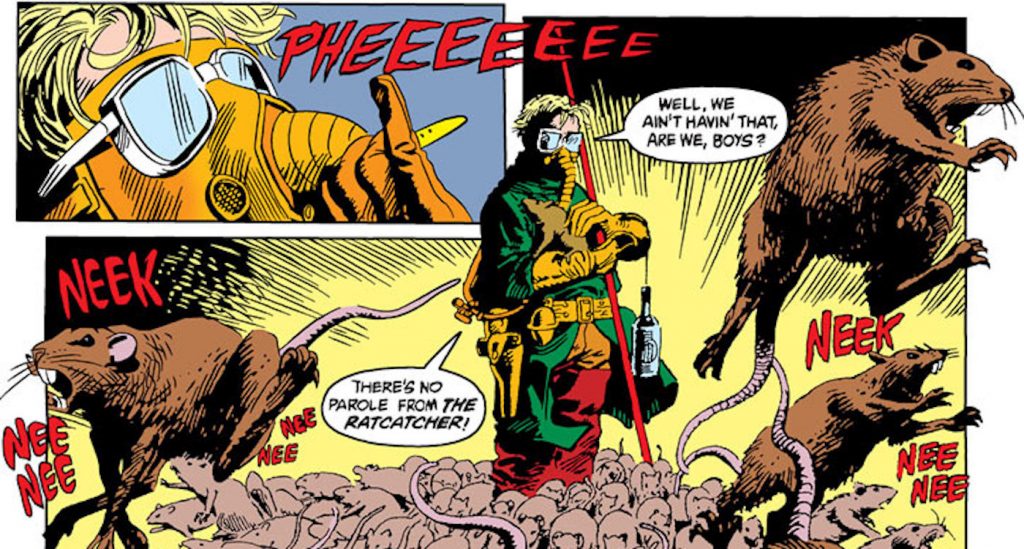 James Gunn‘s The Suicide Squad is shaping up to be a big old party of weirdo villains, and we’re excited about that. In the last two days, two new faces joined the cast in very intriguing roles. Ace character actor and Ant-Man alum David Dastmalchian has nabbed the role of Polka-Dot man. This bizarre villain was often a pain in Batman’s side, sometimes literally. Polka-Dot man’s namesake costume conceals his many weapons. He’s a lunatic. Now Variety reports that actress Daniela Melchoir will appear as Ratcatcher.

Melchoir will give Gunn the chance to have fun with one of DC’s grosser villains. In the comics, Ratcatcher is a man named Otis Flannegan, a former member of the Gotham City Sanitation Department who commands an army of rats. Ratcatcher doesn’t just love rats, he’s a big fan of poisonous gases, too (hence his trademark gas mask).

We had initially heard that Idris Elba would be taking over for Will Smith as Deadshot, but it turns out he’s now going to be a new character. Variety reported that after discussing it for several weeks, Gunn, Elba and the rest of the team decided it made more sense for the talented actor to take on a new role. This also leaves open the possibility that Smith could return in the future.

There’s also been a lot of reporting that Gunn will be including the villain King Shark. Pretty much everyone is in agreement—it needs to be Tom Hardy.

John Cena is reportedly also joining the cast, with most folks in the know saying he’ll be taking the Peacemaker role that was originally supposed to be Dave Bautista’s. Margot Robbie will reprise her role as the original Suicide Squad’s breakout character, Harley Quinn. Jai Courtney is back as the daffy, often drunk Captain Boomerang. And finally, the great Viola Davis returns as the brains behind all the mayhem, Amanda Waller.

The Suicide Squad is set to begin filming this fall.