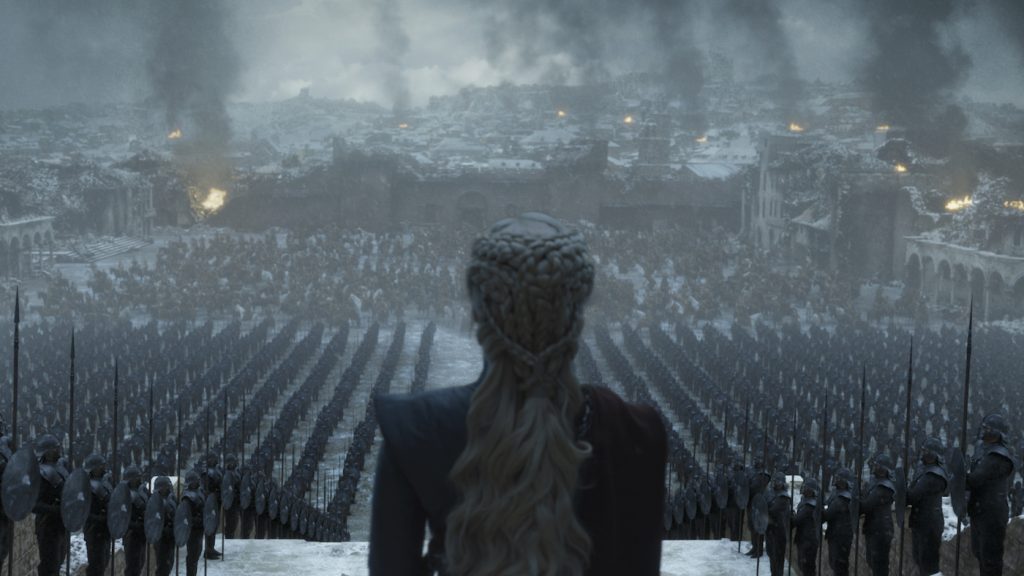 How do we know that HBO wants to keep whatever secrets are left in Game of Thrones as secret as possible? Usually, they release about a half dozen (or more) photos for the upcoming episode—for the finale, they’ve given us but two. The first and most potent is the featured image of Daenerys Targaryen looking down upon her victorious army and the smoldering ruins of King’s Landing. It’s safe to say that last Sunday’s episodes “The Bells” brought Dany’s character arc to the place we—and she—always feared it would go. She is now the Mad Queen, having burned up tens of thousands of innocent people via her weapon of choice, Drogon. This makes her an even more successful tyrant than her father, the Mad King Aerys Targaryen, who would have done something similar had Jaime Lannister not killed him first.

The second image is of a stricken Tyrion, beholding the carnage of his queen’s rage. Tyrion has, to put it mildly, lost his touch with predicting people and outcomes.

We wondered yesterday whether the green fire we saw exploding during “The Bells” signaled Dany’s fate. What surprises might the finale have in store for us that could possibly alter Dany’s rampage? There is very likely going to be a showdown with Jon. Where was Arya Stark off to on her white horse? What might she do now that she witnessed the bloodbath first hand? How will Sansa and the North handle a new Mad Queen on the Iron Throne?

It seems likely that Game of Thrones co-creators David Benioff and D.B. Weiss have a few final twists up their sleeves. Dany becoming the Mad Queen and Jon killing her is something folks have been predicting for years now, so there has to be something more, right? This record-breaking season of this record-breaking show has been, ah, something of a flashpoint for many, many long-time watchers. The Night King was dispatched in but a single episode. All the years worth of worrying and wondering about what he represented died with him. Then Dany broke bad, choosing to slaughter innocents before she took down the Red Keep and her true enemy, Cersei Lannister. Now they’ve got a single episode left to somehow make all of this feel satisfying. Will they pull it off? We’ll be watching. Our bet is so will you.