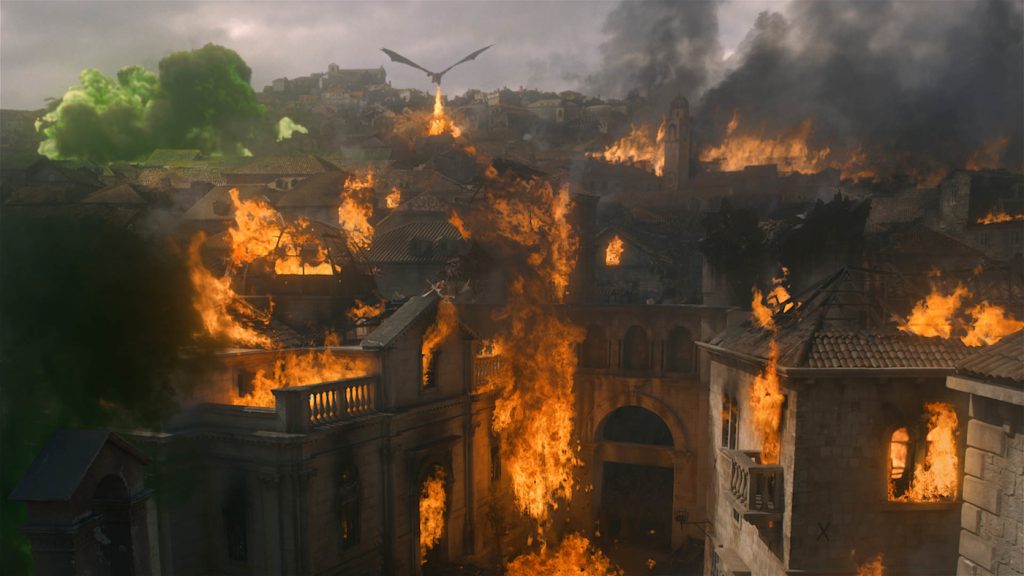 Did Game of Thrones Tease Dany’s Fate With Green Fire?

This post contains spoilers for those of you not caught up to last Sunday’s episode “The Bells.” Apparently, you weren’t one of the 18.4 million people who watched it.

At the end of Game of Thrones gut-punch of a penultimate episode, “The Bells,” there were several blasts of mysterious green fire. You might have missed them in all the death and destruction Daenerys Targaryen was raining down on King’s Landing. If you did happen to catch it, there’s a chance you’re enough of a GoT maester that you knew immediately what that green fire lwas.

As Dany and Drogon were torching every structure and every living person in King’s Landing, it appears they detonated the last cache of wildfire in King’s Landing. In two wide shots during all that mayhem, bursts of green flames were clearly visible. This, of course, was a direct call back to Dany’s father. The infamous Mad King Aerys Targaryen had been very close to using wildfire to “burn them all.” The “all” in that instance were the innocent people of King’s Landing. Aerys never got the chance. He was murdered by a member of his Kingsguard named Jaime Lannister, who forever after was known as the Kingslayer.

We’ve been reminded throughout Game of Thrones eight seasons that Dany’s father had hidden caches of wildfire all over King’s Landing. Jaime Lannister pretty much laid this all out in season three:

“The Mad King was obsessed with it. He loved to watch people burn, the way their skin blackened and blistered and melted off their bones. He burned lords he didn’t like. He burned Hands who disobeyed him. He burned anyone who was against him. Before long, half the country was against him. Aerys saw traitors everywhere. So he had his pyromancers place caches of wildfire all over the city. Beneath the Sept of Baelor and the slums of Flea Bottom. Under houses, stables, taverns. Even beneath the Red Keep itself.”

Jaime did what Jon Snow could not. He killed the Mad King before he could turn his love of watching people burn to the million or so residents of his city. Although to be fair to Jon, it was nowhere near as evident that Dany was the homicidal maniac that her father was. Dany never seemed to particularly enjoy lighting people up via one of her dragons. She certainly never, ever rejoiced in killing innocents. Until “The Bells,” of course.

What lots of folks are pointing out now is a potentially fateful encounter between Jaime and Jon in season one. Jaime thanked Jon, mockingly, for heading north to the Wall to join the Night’s Watch. “We’re grateful,” Jaime says to Jon, “to have good strong men like you protecting us.” He was being a jerk, but now these words take on new resonance. Jaime actually had protected people, but now he’s dead, and it’s Jon who has to decide what to do about a maniac Targaryen. That green fire that flared up during Dany’s slaughter of King’s Landing suggests Jon failed to protect those poor people. He still has a chance to protect the rest of the realm, if he can stomach it.