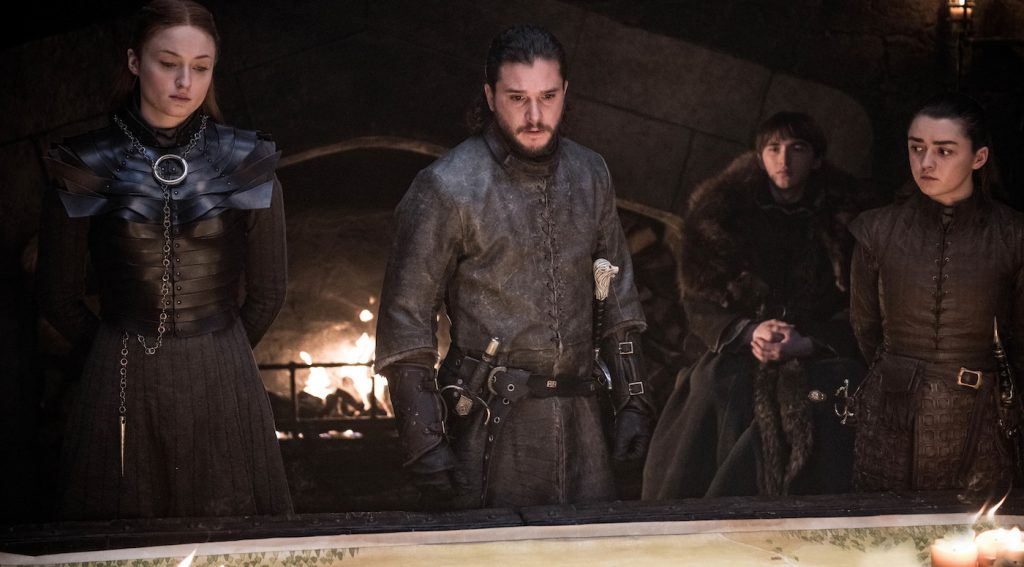 Which Major Character(s) Will die in The Battle of Winterfell?

We’ve had two bloodless, at times achingly heartfelt episodes to prepare us for what’s to come. Both “Winterfell” and “A Knight of the Seven Kingdoms” allowed us to spend some time with characters we’ve had nearly a decade to get to know. The third episode of Game of Thrones eighth and final season will offer no such opportunity for reflection.

Death has arrived in Winterfell. The squabbles, the memories, and the quiet conversations by firelight are over. The Night King and his army will lay claim to some—if not the dreaded scenario, all—of these people from here on out. It’s a certainty that many of the minor-major characters will fall. We’re talking about folks we all really like, but aren’t the series’ mainstays. Davos Seaworth, Jorah Mormont, Missandei, Grey Worm, Gilly, the Hound, Gendry, Beric, Tormund, Theon—some of these people aren’t going to make it out of the next episode. If they do, many won’t make it through episode four.

The question we have about episode three is which major character might take the fall? It’s the guessing game many GoT watchers are playing right now. So let’s play!

Unless show creators David Benioff and D.B. Weiss have a major shocker up their sleeves, we can assume that both Dany and Jon will survive the next episode. So much of the intrigue that has fueled Game of Thrones has been based on her quest for power and his formerly mysterious lineage. Dany and Jon are inexorably linked, and their fates, in a way, represent the fate of everyone in the Seven Kingdoms. This means it’s very likely they both make it through episode 3 at the minimum.

The same can’t be said for two characters who featured prominently in the last episode. Brienne of Tarth and Jaime Lannister. Yes, you could argue Brienne isn’t a major character, but we’re here to defend her. Both Brienne and Jaime were given marvelous capstones to their intriguing character arcs. Jaime’s gone from a cocky, ruthless Kingslayer to something entirely different. One-handed, humbled, and honorable if you want to get alliterative about it. Brienne has always been an honorable figure, but “A Knight of the Seven Kingdoms,” named after her, finally bestowed her the title she’s long deserved, courtesy of Jaime himself. You couldn’t ask for a better sendoff for either character. Both seem like very possible choices to pay the ultimate sacrifice in the coming battle.

Arya’s fate might have us most vexed of all. Few characters have changed as drastically as she has. From a precocious and spirited child in the pilot to a vengeful killer, Arya is arguably the character we fear the most for. Arya isn’t going to be sitting out the battle in the crypt. Her death would be heartbreaking, but it would also make narrative sense. The writers have given her a steely-eyed demeanor in which she doesn’t seem to fear death. In fact, she’s been courting death for a long time, and she’ll face it, head on, with her new double-edged dragonglass spear.

If you had to pick the single character that represents GoT in its sprawling entirety, it would be Peter Dinklage’s Tyrion. Funny, self-deprecating, brilliant, and a survivor above all. Tyrion’s always managed to figure out how to make himself essential to whoever happened to hold power over whether he lived or died (save his sister). Now, however, he no longer has that ability. His usefulness only makes sense if the living survives this war. Tyrion requested to fight in the coming battle, but Daenerys refused, saying he’d be needed in the aftermath. Yet one imagines that Tyrion may rebel and join his brother and his friends. If that’s the case, he could be a major character who meets his end in episode three. Like Arya’s potential death, seeing Tyrion fall would be a major blow and proof that Game of Thrones is still unafraid to take out beloved characters.

Sansa’s a tricky one. She has become one of the most credible leaders in all of Westeros. Her grasp on politics, tactics and human behavior is formidable. It’s hard to imagine her hiding in the crypt with the rest of the noncombatants. She’s a leader, which means she’ll likely be out amongst her people as the Night King makes his push. Yet will she die? You would think that Game of Thrones needs Sansa going forward, to both counter Daenerys and provide her cousin (this feels strange to write) Jon Snow with some much-needed clarity. Her fate is a tough one to gauge, but we’re guessing she makes it through the next episode. Or maybe this is just our hope.

Bran—the Three-Eyed Raven—put himself on the line in the war strategy meeting. He revealed that the Night King’s overall designs include killing Bran personally. “He wants to erase this world. And I am its memory.” He then suggested—and the rest of the crew reluctantly agreed—to be the bait that lures the Night King into the Godswood. Theon valiantly requested that he and his Iron Born men be there to defend him. This makes Bran a major character with the most plausibly dangerous position heading into the next episode—yet—if Bran’s death means the Night King wins, one might rightfully assume he manages to survive, in some shape or form, at least for a little while longer.

One main character we can be almost certain will make it through episode three is Cersei. The Ice Queen’s grand plan is to wait out the Battle of Winterfell in King’s Landing, then kill whoever’s left. While she’ll almost certainly survive the next episode, her overall fate seems grim. She’s the most hated person in all of the Seven Kingdoms who doesn’t have blue eyes and an army of dead people. Whoever wins the Battle of Winterfell will surely come for her net.