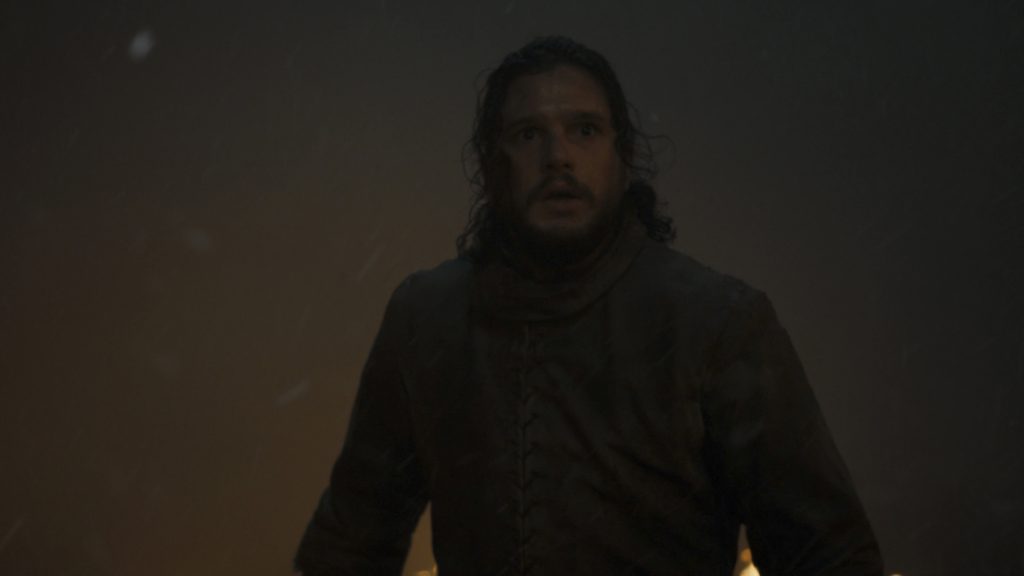 Game of Thrones Episode 3 Images Hint at Horror to Come

As we wrote yesterday, the time for talk is over.

Game of Thrones has entered the final phase in its titular lethal contest over who rules, who serves, and who dies. The premiere and the second episode gave us time to breathe. Danerys Targaryen and her vast southern army have been reluctantly absorbed into the north, by a people who don’t really trust them. Jon Snow has finally learned of his true parentage. Tyrion and Jaime Lannister enjoyed a grim laugh at the thought of what their dead, dour father Tywin would think about his sons’ decision to fight and die on behalf of the north, in Winterfell no less. Arya Stark’s long arc from a precocious child to assertive, deadly adult is complete. Her sister Sansa has become not only a credible leader but one of the only people in the long history of the Stark family to possess tactical intelligence. Brienne was finally knighted (by Jaime!).

The three horn blasts that sounded at the close of the second episode signaled the end of the game. The Night King’s army has arrived at Winterfell. Whatever his ultimate goals are (there are endless theories), the Iron Throne is not one of them. Dany has long claimed she wanted to “break the wheel” and recast the Seven Kingdoms as a kind of quasi-democracy (with her as the undisputed monarchical ruler), but the Night King is the one who truly wants to change the realm for good. Should he win—and by sheer numbers alone he should—he wouldn’t just break the wheel, he’d wipe the memory of millennia of human rule, and all memory, from existence.

Which brings us to the new photos HBO has just released for episode 3. What do we have here? For our featured image, a very terrified looking Jon. We’ve got Brienne commanding the left flank along with her newest subordinate, Jaime. There’s an alarmed-looking Sansa, facing Arya, upon one of the Winterfell parapets. We’ve got Tyrion and Varys down in what appears to be the crypt (which reminds me—you know where I wouldn’t want to be in the event of an attack by a zombie army? A crypt.)

After seven seasons plus two episodes of build-up, the only war that matters is finally upon us. Ready or not, the winner of Game of Thrones is finally about to come into focus.

That’s if anyone could ever truly win such a game.