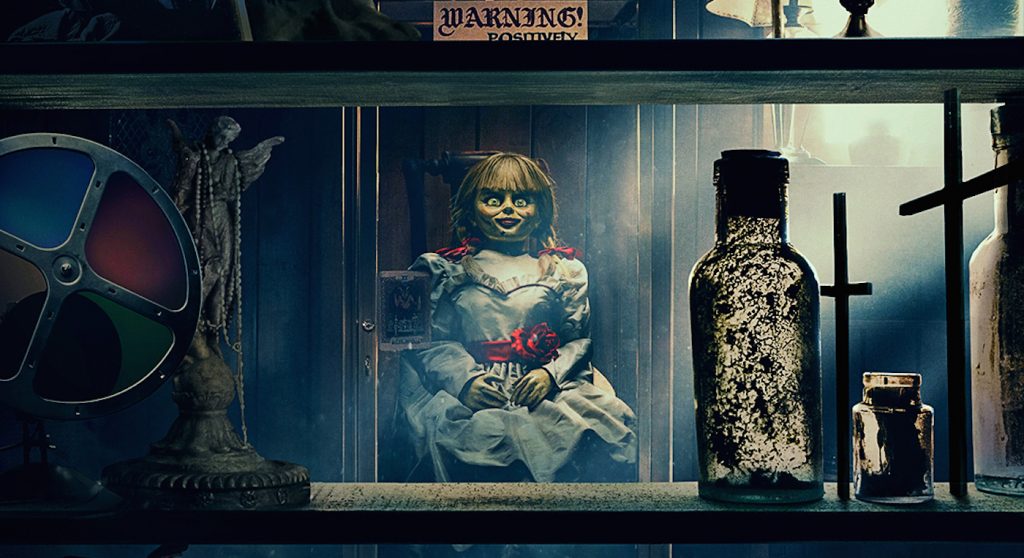 If the Warrens say that something is dangerously possessed by an evil spirit, you had better believe them. Of course, people never listen and the creepiest doll on the planet breaks loose again in Annabelle Comes Home.

The Warrens keep the most dangerous items from their cases under strict lock and key to protect the public from curses and demons. However, they cannot protect people from their own stupidity in a new trailer for Annabelle Comes Home.

Ed (Patrick Wilson) and Lorraine (Vera Farmiga) feel safe raising their young daughter, Judy (Mckenna Grace) in the same house with their collection of the occult, but they didn’t bargain on someone unleashing Annabelle. When Judy’s babysitter (Madison Iseman) is overcome with curiosity, she unwittingly releases the killer doll. Of course, Annabelle doesn’t punish her. Instead, she sets her deadly doll desires on poor little Judy.

Being hunted by evil spirits isn’t Judy’s only curse. The trailer also reveals that she’s inherited her mother’s ESP. Judy says she is sometimes plagued by terrifying visions like Lorraine. As we’ve seen in Lorraine’s case, sometimes that talent can be more dangerous to those who can see paranormal activities than those who cannot. That is a lot to put on a little girl.

The spinoff from The Conjuring is finally looping back around to the paranormal experts that started it all. The doll of death first appeared on screen in a cameo in The Conjuring then got her first headlining role in Annabelle set in 1967 that focused on another family. Three years later, Annabelle: Creation went back to the root of the evil in 1943. This is the first time we’ll see The Warrens back with Annabelle since The Conjuring.

Screenwriter of all three films, Gary Dauberman, steps up to direct the third film in the Annabelle series from a story he wrote with James Wan (The Conjuring, Aquaman).