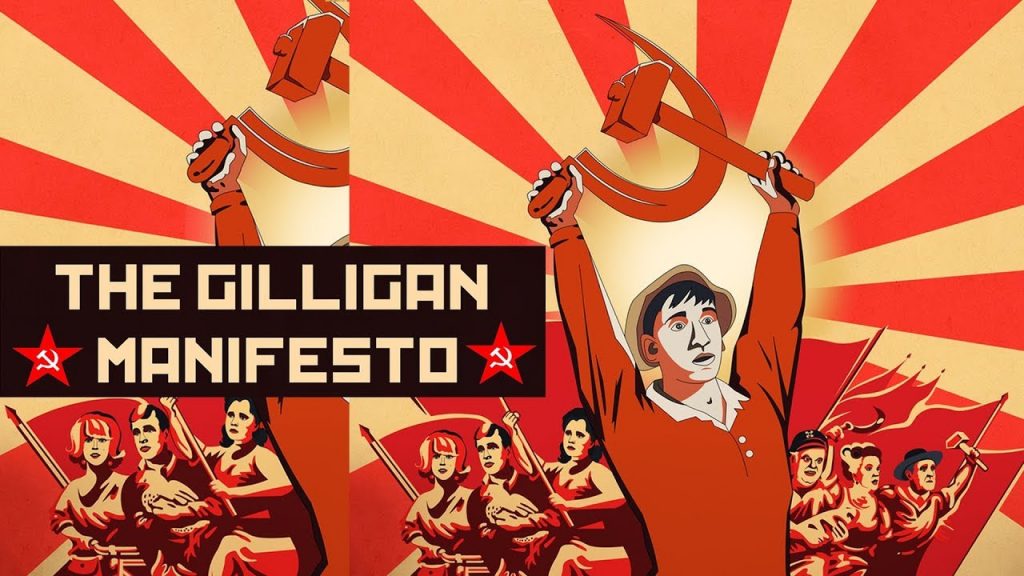 The Gilligan Manifesto‘s Director on Revisiting a Radical Show

I had two reasons to be eager to see The Gilligan Manifesto, the new documentary about the 1960’s television series Gilligan’s Island, now available on Amazon. First, writer/director Cevin Soling’s film is a thoughtful, serious (really!) exploration of the way a silly, slapstick comedy reflected and examined the issues of its era, the midst of the Atomic Age. The seven very different characters did not choose or expect to have to spend more than three hours together but ended up having to build a society. The scenes from the series included in the film show some of their efforts to apply—and subvert—the rules they were familiar with to an isolated island with a tiny population.

My second reason was more personal. My father, Newton Minow, was the Chairman of the Federal Communications Commission from 1961-63.  His criticism of television (he called it a “vast wasteland”) so enraged writer/producer Sherwood Schwartz that he named the sinking ship on “Gilligan’s Island” the S.S. Minnow. It was intended as an insult, but my family thought it was very funny and my dad has a prop lifesaver from the show in his office. The documentary includes interviews with Schwartz, Dawn Wells and Russell Johnson, the actors who played Mary Ann and the Professor, and Harvard professors who are clearly enjoying the opportunity to discuss Gilligan’s Island.

In an interview, Soling explained why Gilligan’s Island has more to say about economics and democracy than other popular sitcoms of the era and picked his favorite episodes and guest stars.

What is the significance of the title—with the island named for the lowest ranking person in the group?

In all the books and writings on Gilligan’s Island, the issue of why the island is Gilligan’s never gets asked. It is curiously taken for granted even though it is fundamental to the central theme of depicting a society that expresses an ideal vision of the working classes. Of the seven castaways, only Gilligan and Mary Ann are members of the proletariat. They are also the only two characters who have proper names [in the show’s theme song] where the rest are dehumanizingly defined by their function—and all those functions cease to have any meaning on the tiny island. There is a skipper without a boat, a millionaire couple where money has no meaning, a professor where there is no school, and a movie star where there are no movies and celebrity is meaningless because everyone is equally known. While the show could have been Gilligan and Mary Ann’s Island, she and the Professor were originally intended to be minor characters, hence “and the rest” in the original theme song.

Does the very silliness and simplicity of the show make it easier to attribute deeper themes to it?

The simplicity and silliness of the show make it is easier to overlook the deeper themes, or for the intellectually lazy to dismiss those ideas when they are introduced, but it does not make it easier to attribute concepts that are not present. One could discuss the social forces that were in place that helped produce profoundly silly shows such as The Flying Nun or My Mother the Car, but the episodes themselves are trivial. That is not the case with Gilligan’s Island. Many of the episodes are seething with socio-political commentary.

How do you think Gilligan’s Island ties into post-WWII fears about the atomic bomb?

The concern over surviving a nuclear war was pervasive in the 1950s and 1960s and the Federal Civil Defense Administration (FCDA) was established in 1951 to educate and assure citizens that the US could survive an atomic war. Large-scale drills were staged in major cities. Children in school were taught what to do in the event of an atomic blast, and some people even constructed fallout shelters. Gilligan’s Island played directly into this survival fantasy. The shipwreck serves an analog for a nuclear holocaust where the castaways reconstruct civilization from the ashes. What makes the show additionally notable is that it is the first post-apocalyptic comedy.

You included quite an extraordinary collection of clips from movies about the end of the world. How did you find them all?  How were they received by audiences?

There is a whole genre of apocalyptic cinema with extensive catalogs in books. The challenge wasn’t finding them but going through all of them to select just the ones that were most relevant and to string them in a certain order. The audience response to the screenings has been phenomenal. They find the film educational and entertaining and the clips establish a sense of time and place. Many grew up on Gilligan’s Island in reruns and have no idea when it was first broadcast or what was taking place at that time.

How do the political and economic themes you identified in Gilligan’s Island fit into some of the other comedies of the era, like Green Acres and The Beverly Hillbillies?

There are political messages in other shows, but, unlike Gilligan’s Island, the episodes themselves don’t provide much fodder to go beyond that general theme. Green Acres and The Beverly Hillbillies both deal with a clash of cultures in the struggle to define America, which was a concern at that time. There is a distinct effort among those and other shows to depict the wealthy elite, at their core, as being no different from the working class other than possessing affectations that made them inauthentic. Similarly, you have shows like Bewitched and I Dream of Jeannie where the female protagonists possess remarkable powers but are persuaded not to use them otherwise the status-quo would be irreparably disrupted. In all these instances, I think the subtext was deliberately designed to promote passivity where people could feel good about themselves and their socio-economic status and not rock the boat. That said, there is nothing special about any individual episode of any of those shows beyond reinforcing that cynical theme. This is why Gilligan’s Island stands out. Many episodes addressed a variety of distinct social and political issues.