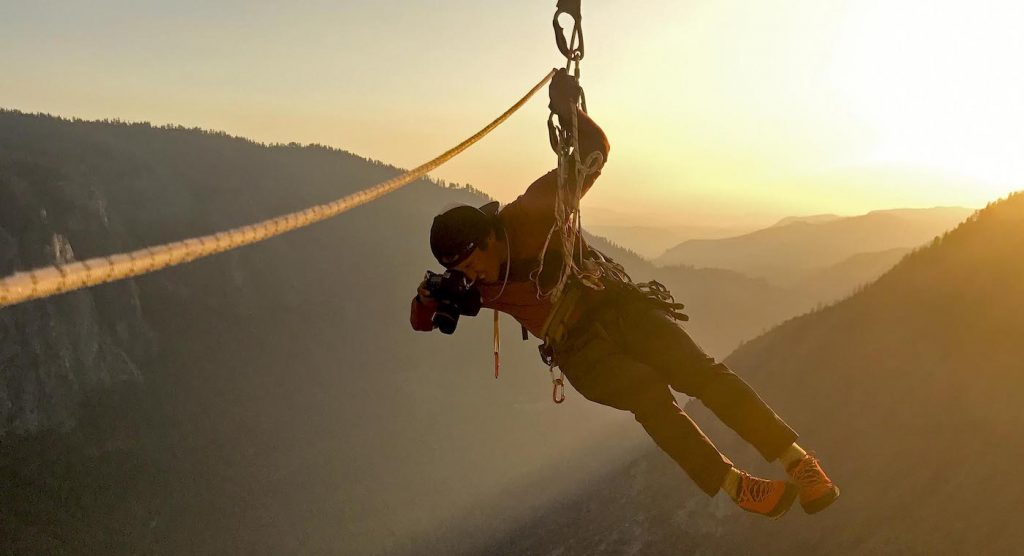 How Free Solo‘s Oscar-Nominated Directors get it Done

Jimmy Chin is a professional climber and filmmaker who specializes in nail-biting documentaries that take place on ludicrously sheer mountain faces. His work demands a supernatural degree of calm. Today, however, Chin sounds like just another irrepressibly stoked dude. He’s fresh from the annual luncheon for Academy Award nominees. Alfonso Cuarón, it turns out, had seen Chin’s latest film, Free Solo, which is nominated for Best Documentary Feature.

“Cuarón said ‘I was on the edge of my seat the entire time and my palms were sweating,’ ” says Chin, delighted.

Chin and Vasarhelyi confronted extraordinarily complicated and dangerous logistical obstacles in order to get the footage of Honnold that has consistently scared the bejesus out of audiences—even though Honnold is widely known to still be alive and well. Their shooters (of whom Chin was one), elite climbers as well as skilled cameramen, had to unpack and assemble their heavy Canon C300 cinema cameras and long lenses while dangling from ropes above the Yosemite Valley floor; when it came time to reposition, they had to quickly climb to a new location with their hefty Canons awkwardly clipped to their equipment.

Amazingly, in two years of shooting, they only had one major mishap: a crewmember dropped a pack that had a camera and lens in it. The pack fell 600 feet, breaking its pricey contents. An accident like that might get a shooter chewed out or even fired. Neither happened. The mishap took place shortly before—after countless trial runs—Honnold was about to attempt the El Capitan free solo for real. The crew handled the situation and told Chin about it later. “That reinforces how important it is to have a team where there is an implicit connection among all the producers and shooters,” says Chin, who relies on his collaborators to take responsibility for difficult game-time calls. Vasarhelyi says, “You can’t ever overstate just how difficult this production really was. It meant six guys being ready at any given moment to do the best work of their lives.”

The acrobatic shooting proved all the more crucial in Free Solo because Chin and Vasarhelyi couldn’t use drones, for which the film cried out. Drones aren’t allowed in Yosemite. Sometimes, even celebrity pull is not enough (Chin and Honnold are climbing-world superstars). “We tried for three years to get a drone permit and never got it. Alex and Chai and I appreciate that. It’s not great to have drones flying over national parks,” Chin says.

Nonetheless, Free Solo does boast one conspicuously epic semi-unmanned shot. When Honnold finally climbs over the final ledge of El Capitan to safety, completing a years-long dream and possibly reaching the pinnacle of his climbing career, we see him from above. Gradually and seamlessly, the camera recedes from Honnold, revealing first the immensity of El Capitan, then the majesty of Yosemite Valley. The perspective captures the seemingly incomprehensible scope of the moment.

How to get the shot? They stationed a helicopter with a gyrostabilization system 3000 feet above the valley floor, with, essentially, a 1500 meter lens, and shot in 6K. “I wanted the helicopter far enough away where Alex couldn’t hear it or see it— I didn’t want him to have any distractions,” Chin says. The shot is so wide yet looks so crisp, it’s almost unreal, an echo of the unreality of Honnold’s miraculous feat (completed in under four hours!). “It was real,” Chin says. “We knew that was a really important shot for us.”

A less daunting but still tricky location involved not vast open space but the narrow box of the van where Honnold and his girlfriend, Sanni, were living. To document their relationship, “we would be wedged in the passenger seat with the sound person and an assistant cameraman. It was pretty hilarious,” says Chin.

Chin’s sense of humor and easygoing, good nature makes him a compelling subject in his own films. He is one of the climbers central to his 2015 epic Meru (shortlisted for an Academy Award) and has a big chunk of screen time in Free Solo. Onscreen, he’s the perpetual master of making the best of a difficult situation. That turns out to be true off-screen, too, as he navigates the exhausting annual film awards circuit (Free Solo has nabbed a bunch).

“Alex and I have been promoting the film at climbing gyms all over the country. We call it our World Tour of Indoor Climbing Gyms,” he says. “We’re in good climbing shape.”

Win or lose on Oscar night this February 24, hopefully Chin will be outside climbing again in no time.