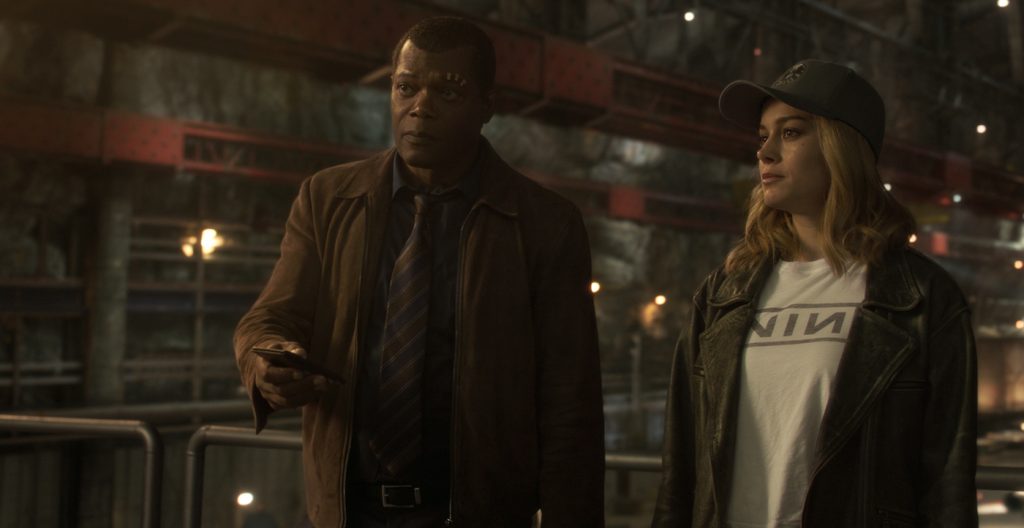 You’ve seen Captain Marvel? You’ve read our piece on those post-credits scenes? You’re up to speed on the creative team behind one of Marvel’s best origin stories? You’re hip on how they de-aged Samuel L. Jackson and Clark Gregg? Good, then you’re in the right place. If you haven’t seen the film then obviously do not read any further.

Okay! Let’s discuss some of the Easter Eggs that co-directors Anna Boden and Ryan Fleck and their creative team embedded in the film. There are obviously a ton more, but, we wanted to keep this under 10,000 words.

Ever since he was first spotted on a poster, Carol’s pet has been stealing hearts. Goose looks like a mild-mannered cat, but the reality is hilariously surprising. The Skrulls have a great fear of the feline that seems unwarranted at first, but Goose soon proves they have reason to be alarmed.

When Fury is cornered and escape seems impossible, Goose comes to the rescue. Rather than pounce, he does something better. The cat-like creature releases giant tentacles and devours the enemy. He also proves useful later when the company needs somewhere to hide one of the most infamous Marvel MacGuffins of them all, the Tessaract. His peculiar abilities include storing things for later. Post-credits, Goose proves he can retrieve the things he swallows, which makes him the perfect hiding place for important items.

A franchise long mystery was finally solved thanks to the luxury of time travel. By turning back the clock, we were able to return to the moment when Nick Fury suffered an injury that cost him his left eye. Adding to the mystique, it wasn’t actually the moment we first thought.

Since we were first introduced to the S.H.I.E.L.D commander in the Iron Man post-credits scene, Nick Fury has always worn an eyepatch over his left eye. The story behind the injury has been a mystery until now. When Skrulls first invade C-53, aka Earth, one of the shape-shifting aliens imitates Fury’s partner, Phil Coulson. He soon discovers the imposter and they end up in a crash injuring Fury’s eye. He makes a full recovery, however, and the mystery continues. The true cause of the permanent eye loss, however, occurs later when Goose claws him. Fury is convinced that the scratch is minor, but Flerken claws are more potent than cats. The eye apparently becomes infected and the damage is permanent.

We always imagined that among the great Avenger battles, Fury probably lost the eye in combat, but it was more of a domestic accident. No less of a badass for it, we’re glad to know the mundane cause of Fury’s iconic eyepatch.

There were some major moments in Captain Marvel that inspired cheers, but none more so than the cameo appearance of Marvel legend Stan Lee. Captain Marvel marks the first MCU film following Lee’s passing and the elaborate logo opening was an homage to the creator of so many characters we love.

Even with the expectation that Lee would make an appearance, it was still a delightful and heartwarming moment. Carol chases a Skrull through a crowded train and she suspiciously stares down each of the passengers for signs of the imposter.  However, when she reaches Lee himself, she smiles knowingly and allows him to resume his reading. What’s he reading? A copy of Kevin Smith’s Mallrats, which Lee also appeared in.

For all of the 90s kids watching Captain Marvel, there are tons of nostalgic references to the decade. None is more iconic than Carol’s crash landing in a Blockbuster Video store stocked with VHS tapes for rent. It is no coincidence that Carol picks up a copy of The Right Stuff that coined the tagline “higher, further, faster” that was used in the Captain Marvel promotions. The classic movie follows fellow Air Force pilots pioneering space travel and it’s no wonder Carol feels a connection to the film.

Another outstanding reference comes when Carol is startled into shooting off a photon blast. As it turns out, her attacker is a cardboard cutout of Arnold Schwarzenegger and Jamie Lee Curtis in True Lies. The blockbuster film also features a now famous jet fighter scene. It even inspired Rian Johnson to search for a streaming copy to enjoy this weekend.

Carol is obviously powerful, and with great power comes great appeal to those with evil intent. In an effort to manipulate her abilities, the Krees degrade Carol and limit her potential through a chip inserted in her neck. However, no one can truly hold her back, and at the end of the film, she frees herself from all those who try to tame her.

We saw the super fighting skills, the expert piloting, and even the photon blasts Carol possess throughout the film. However, when push comes to shove, the gloves come off. Literally. Carol burns through all restraints and releases the fire from within. When she reaches her full potential, the mohawked heroine can propel herself to the stars. She is able to fly through space unaided and it’s truly glorious to see. Hopefully, this is just a teaser of what is to come in Avengers: Endgame and Captain Marvel’s contributions.