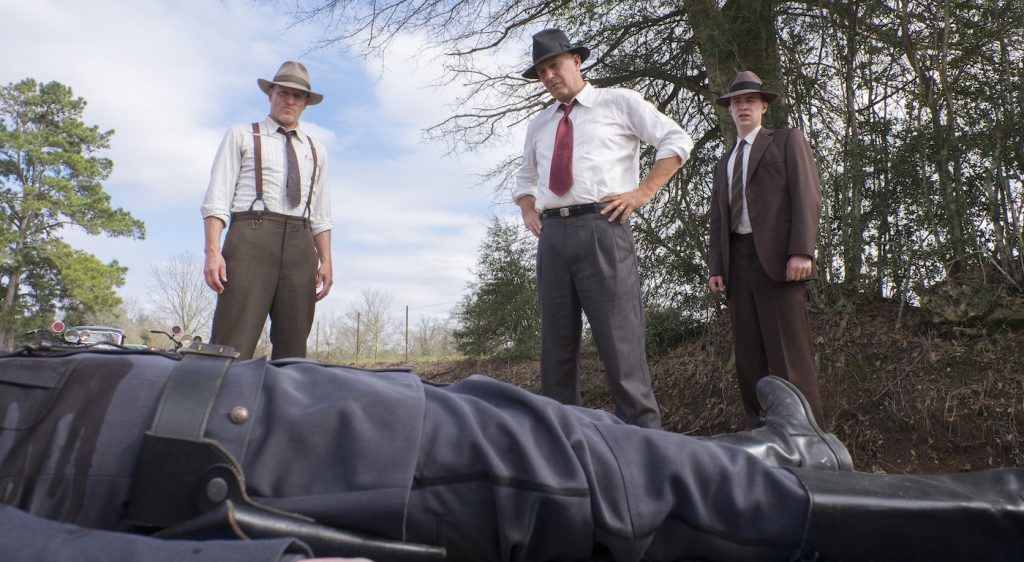 The John Lee Hancock-directed story covers 1,600 miles of terrain. This meant Corenblith spent a lot of time in his car searching for locations. He says, “By the time I finished this movie, I’d been in the passenger’s seat with location scouts for 18,000 miles and drove myself for another 12,000. In order to make a movie called The Highwaymen, you really have to become a highwayman.”

The pursuit encompassed Texas, Arkansas, and Oklahoma but Corenblith managed to find plausible stand-ins within the state boundaries of Louisiana. “It was really important to get the west Texas vibe, the pine trees of East Texas, the great plains Dustbowl feel of Oklahoma before we get into the swampy regions of Louisiana.” Working with location manager Ed Lipscomb and some half a dozen scouts based in Shreveport, Baton Rouge, and New Orleans, Corenblith managed to mimic a multi-state trek. He also built replicas of Depression-era migrant camps, constructed roadside motor court and re-fashioned Donaldsonville, Louisiana into a period-perfect small town. “Donaldsonville had so many elements already in place that I was able to create an accurate depiction of what gas stations and neighborhoods really looked like during this time period.”

For one sequence, Corenblith paid homage to photographer Dorothea Lange, famed for her Dust Bowl portraits. “The scene takes place outside a gas station in the middle of nowhere,” he explains. “She took this very evocative shot of these guys on the porch of an old gas station that had all these signage of the period. I decided to transpose that Dorothy Lange photograph into this setting. When I design a period film, I love finding some kind of archival frame that rings a bell with people because you’re showing them an image in a mirrored or rhymed kind of way.”

Corenblith scoured the state in search of period-perfect country roads that conformed to extremely specific parameters. “It was like finding a needle in a haystack because the story has to do with the FBI’s modern criminal forensics versus the old Indian tracker skills that Kevin and Woody have as Texas Rangers. The shoulders of these roads had to be asphalt or better yet dirt, so we could show the FBI testing for tire prints but we also see Kevin Costner’s character looking at footsteps and understanding people’s heights. At the same time, we needed two-lane roads that didn’t have bulky modern buildings, freeway overpasses, utility poles or traffic off in the distance. That’s why it took 30,000 miles behind the wheel to find these landscapes and crossroads.”

Starring alongside Costner and Harrelson in The Highwaymen are the gorgeous antique cars driven by crime fighters and outlaws alike. Corenblith says, “Bonnie and Clyde tore around the country in a 1934 Ford V-8, the fastest production car of its day. The Texas Rangers need to go just as fast so they got a brand new 1934 Ford V 9. It starts out pristine, then ends up suffering in the same way our heroes suffer.”

Where did the cars come from? Corenblith credits transportation department coordinator Paul Stroh with rounding up the so-called Picture Cars. “I do the research but my fingerprints were not on the actual wrangling of the cars,” he says. “But when antique car collectors hear there’s going to be a movie that sort of valorizes that era, word spreads within that community. We were able to find a replica of Bonnie and Clyde’s Cordoba tan ‘Death Car’.  We worked backward from there.”

The Death Car has its big moment during the movie’s climactic shootout. Corenblith’s urged production to stage it on the exact spot that Bonnie and Clyde met their fate. “Each of the men in the posse wrote very clear accounts of the day Bonnie and Clyde were killed. I had the geography in my head,” Corenblith recalls. “Scouting around Shreveport, we went to the actual spot where the ambush took place. It’s marked by this little roadside monument. It was one of those goosebump-inducing moments.”