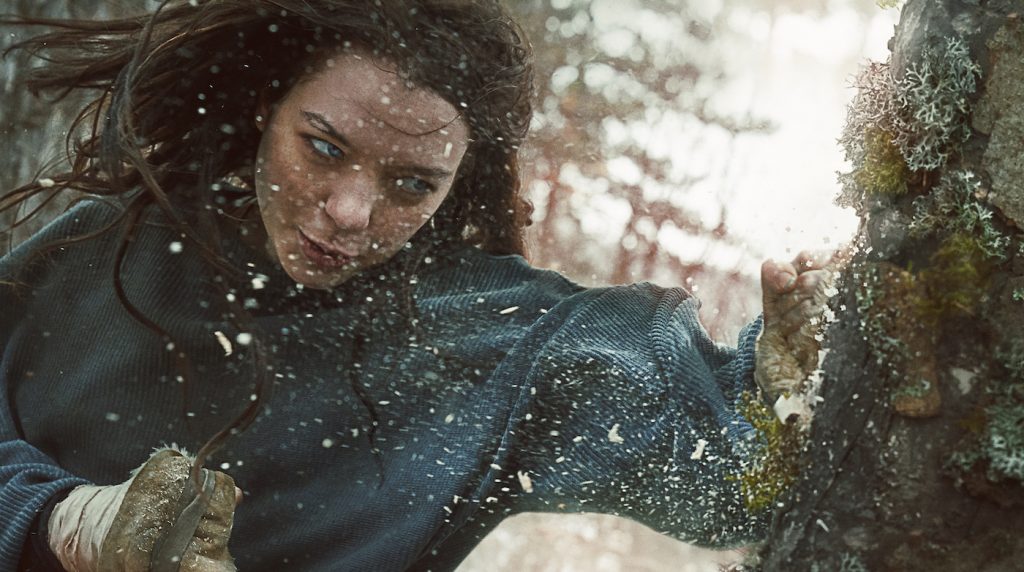 When F. Scott Fitzgerald wrote, in his Hollywood novel The Last Tycoon, that “there are no second acts in American lives,” he either hadn’t considered international lives. Nor had he considered the advent of streaming television.

Thus Amazon brings us Hanna, a reboot, reconsideration, and expansion of 2011’s feature film of the same name. British actress Esmé Creed-Miles plays the 15-year-old titular character. Hanna is raised in feral isolation in the forests of Eastern Europe, “training to fight those who hunt her and her mercenary father,” as the press release has it. Dad’s played by Altered Carbon’s Joel Kinnaman.

Discovery and a cross-continent chase ensue. The story becomes both a coming-of-age tale—as if a young Mennonite girl is visiting a large city for the first time—and a thriller. There is extremely impressive martial arts choreography and increasing body counts. The purposeful mayhem is overseen by showrunner David Farr, coming off not only a successful TV adaptation of The Night Manager but as the co-writer of director Joe Wright’s original film.

We caught up with Creed-Miles during another kind of “chase,” as she moved through several interviews on a very busy press day, to ask her what it was like to fill shoes originally worn by Saoirse Ronan in the feature version. We also asked if she considers herself part of a growing canon of empowered—or unleashed—female assassins, whose number might include Logan’s X-23, La Femme Nikita, Firefly’s River, and Geena Davis’ character in The Long Kiss Goodnight.

On that last notion, she pushes back rather firmly, saying “everything is its own identity, creatively, yet they’re always compared to each other. And because there aren’t enough of these kinds of stories, they get grouped together. Hanna is slightly incomparable with anything else. When men tell the story about badass women, it becomes another facet of the male gaze.”

Here though, that particular gaze was ameliorated by co-executive producer Sarah Adina Smith, who also directed two of the initial episodes (half of the first season was directed by women). Creed-Miles mentioned the more objective, less subjective, lens that Smith brought to the material.

The actress had her own particular lens as well. She mentions that the source film “is great—I saw it when I was 11 or 12 years old, but to let it inform my performance,” she adds, would be a disservice to the story. Creed-Miles was able to make Hanna “a bit less ethereal, and more personable,” than Ronan’s original thanks to the series format. There’s “more of an emphasis on this coming-of-age drama.”

And yet, surprisingly, she lists her initial character influence as Robert De Niro. And not the De Niro of Taxi Driver, as this reporter erroneously assumed at first, but rather his Jake LaMotta from Raging Bull.

“DeNiro is probably my favorite actor of all time,” she says. She cites his work like King of Comedy and yes, his turn as Travis Bickle. But circling back to the boxing opus, she says “with that film, what’s really interesting is watching the corruption of aggression, the corruption of power.”

For Hanna, it’s almost like this opposite journey—where she begins with power.”

She begins to slowly change. She starts to find her physical gifts more of a curse. Violence is something to endure and mete out.  “It encourages her to slightly shift,” Creed-Miles says. “She has a physicality she wants to reject.” Creed-Miles cites a particular scene, in an early episode, where her character notices a family picture belonging to one of her victims. It’s laying on the floor with congealing blood. “Hold on, he has an identity,” her Hanna thinks, and thus this coming-of-age story becomes more urgent. Hanna wants to free herself from the violent path of both her father and their rogue CIA pursuers.

But if that gradual change-of-heart seems somewhat un-LaMotta like, she still very much had De Niro on her mind. It’s clearly evident in a scene depicted by our featured image, where Hanna is punching a tree.  “I wanted to channel that feeling of giving your everything.”

She gave a bit more of her everything in prepping for the physicality of the role. “With the training, it was really important I was doing it as much as I could. It was important the fight scenes were holistic.”

She acknowledged that there were stunt replacements for parts that were unsafe. Miles-Creed did as many of the fight sequences as she could. She credits “two months of training in yoga, martial arts, and cardio,” prior to filming, to get her ready.

And yet the training continued, and overlapped, with the start of filming. “Maybe,” she acknowledged, “you need to sacrifice some of these moments. The stakes are high when you’re acting in such a brilliant film.”