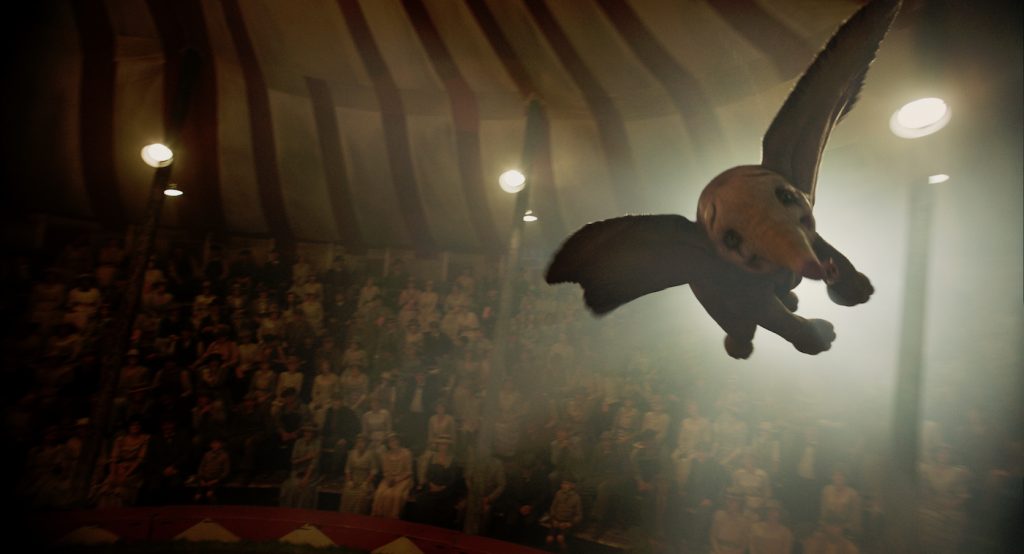 Tim Burton’s live-action Dumbo is not for children faint of heart. The iconic baby elephant with his signature oversized ears is ripped just as mercilessly from his mother in this modern update as he once was in Disney’s original 1941 animated feature. This time around, however, Dumbo’s got bigger, better allies. Upgraded from Timothy the mouse we now have the Farrier children, Milly, and Joe (Nico Parker and Finley Hobbins), who take the lead on Dumbo’s training and care alongside their father, Holt (Colin Farrell).

Papa Farrier is just home from WWI, missing an arm and unsure how to talk to his kids. This becomes ever more necessary as the traveling Medici Bros. Circus, led by the indefatigable Danny DeVito, is folded into Dreamland, a vast urban funfair, a Coney Island re-envisioned through Burton’s undulating, voluminous aesthetic.

The film kicks off under skies of blue and in fields of gold, where the close-knit members of the traveling circus set up camp around their dilapidated train cars. The enterprise has clearly seen better days. Medici’s purchase of pregnant Mrs. Jumbo is set to reverse all their fortunes, but the birth of a giant-eared “freak” throws off the ringleader’s plans. Exit Mrs. Jumbo, with one devastatingly depressing CG baby elephant trailing after the truck carting her away. In comforting the bereft infant, Milly and Joe realize that with the cue of a feather, little Dumbo can fly.

Where an elephant takes flight, success follows, and the flashy showman V.A. Vandevere (Michael Keaton) shows up to bring Medici, Dumbo, the Farriers and the rest of the circus actors to Dreamland. Gone are the worn-down train cars and open vistas of rural America—the newcomers roll into the massive fairground in a whiz-bang parade of gleaming open carriages and cheering crowds. The extensively detailed CG creatures who populate the film’s non-human cast are the stars of the show, but the sets are almost more worthy of note.

“Dumbo takes place in two very contrasting environments,” Rick Heinrichs, the film’s production designer, and a longtime Burton collaborator explained. “One, which I call — to myself anyway — the heartland, is in the wide open spaces that America used to be and in some places still is. I tried to concentrate on what makes that heartland feel like family and real issues of the heart.

We were contrasting that with the much more fantasy world of Dreamland.” To create Dreamland, Burton, Heinrichs, and the visuals team drew from Victorian pleasure parks, Copenhagen’s Tivoli Gardens, and of course, Coney Island (which once had a section called Dreamland). However, “we wanted it to feel more advanced, and more theater-forward,” said Heinrichs. “The only way I can describe it is with more Burton-esque shapes and forms, swirls, curves, moon shapes, and all of these iconic fantasy elements that made you feel transported as you walked through the gates.”

To achieve Burton’s signature look, both the countryside environment and Dreamland were filmed entirely on soundstage build, with visual effects stepping in to create skies and landscapes. The Medici Bros. sets were created at London’s Pinewood Studios, right down to a circus’s worth of old-fashioned train cars, while the massive Dreamland required the space of a former RAF blimp hangar, Cardington Studios, in nearby Bedford.

“It was important to Tim that the background environments had the contrast of those two elements, but each had its own expressive quality,” Heinrichs said. “He would call the feeling ‘intimate,’ which sounds like an oxymoron, but it was a description of finding the sweet spot of something that is both awe-inspiring and magnificent. Beyond the soaring moments are heartfelt elements that would put across the drama of the flying elephant and family that surrounded him.” It’s in these contrasting environments—quaint small-town America set under vast sunny skies versus the urban carnival, a fantastical city unto itself—that Dumbo and the Farrier children’s journey incidentally reveals that all that glitters is not gold.

To fully convey the heightened emotion of a CG elephant, as much of the background as possible needed to be in camera. “The rule of thumb was about making sure that there was real light falling on real objects behind real people. It was literally about a flying elephant who was going to be CG, and we wanted as much of a real environment around as possible to help sell the visceral presence of Dumbo within the film,” Heinrichs said. It’s in the artifice and theatrics of the massive but gated Dreamland environment that Holt and his children meet trapeze artist and Dumbo co-star Colette Marchant (Eva Green), whose sympathies help Holt finally comes to terms with who he wants to be in this world. Dumbo’s well-being becomes paramount to all members of the Farrier family. For all of Dreamland’s promise, it’ll never live up to what the lonely pachyderm needs—a family. He finds an interim family in Holt and his kids. Ultimately, Dumbo needs to bet set free. Luckily, locked gates are no object when you can fly.

Dumbo is in theaters today, March 29.

Featured image: FLYING HIGH – In Disney’s new live-action adventure “Dumbo,” a newborn elephant with giant ears discovers he can fly, and he’s destined to be a star, which may or may not be a good thing. Directed by Tim Burton, “Dumbo” flies into theaters on March 29, 2019. © 2018 Disney Enterprises, Inc. All Rights Reserved.