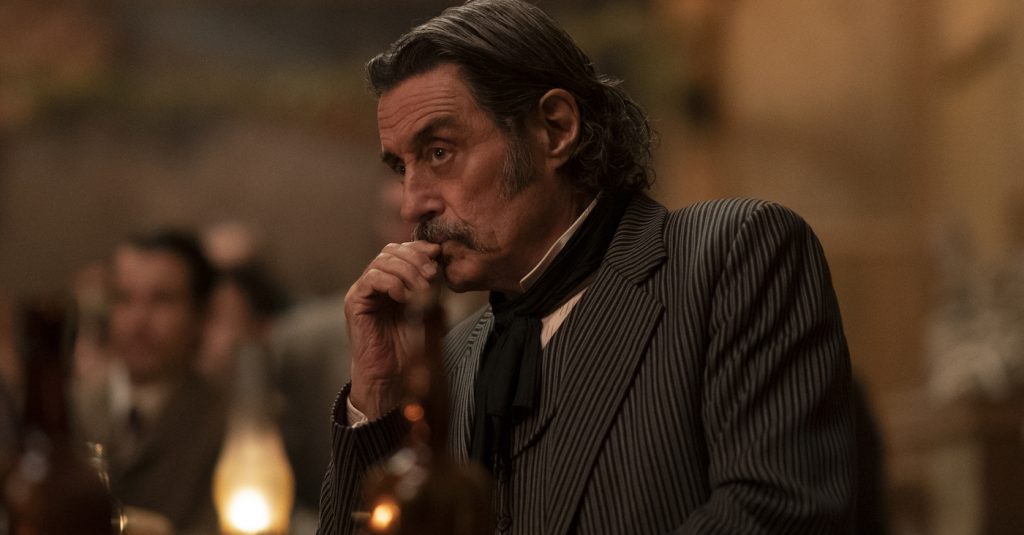 If you’re too young to remember David Milch’s Deadwood, you’re in luck. An original film based on Milch’s critically acclaimed bloody western is coming to HBO on May 31. The feature is directed by Daniel Minahan and written by Milch. HBO has released a new teaser that reveals some of our favorite characters returning to the West’s most ruthless town. If you need a proper Deadwood primer, here you go.

“This town is a sanctuary,” says Ian McShane’s brothel owner Al Swearengen. “Every man worth a name knows the value of being unreachable.” Swearengen and many of the other surviving characters from the original series are back in the titular South Dakota town. They’ve returned to nominally celebrate South Dakota’s statehood. What they’ll end up doing is drinking, quarreling and shooting each other, very likely in that order. HBO’s official synopsis puts it this way:

“In this original movie based on David Milch’s acclaimed, Emmy®-winning HBO series of the same name which debuted 15 years ago today, the indelible characters of the show are reunited after a decade to celebrate South Dakota’s statehood. Former rivalries are reignited, alliances are tested and old wounds reopened as all are left to navigate the inevitable changes that modernity and time have wrought.”

Timothy Olyphant’s Sheriff Bullock is back. He and Swearengen had gone from enemies to frenemies in the original series. They had undeniable chemistry, a kind of big brother/little brother dynamic that was soaked in whiskey and blood. The straight and narrow lawmen and the ruthlessly cynical but undeniably brilliant brothel owner had more in common than they’d have imagined. Molly Parker’s formerly opium-addicted Alma Ellsworth returns as well. She joins Paula Malcomson’s prostitute and all-around survivor Trixie, and John Hawkes’ small business owner Sol Star. The original series was nominated for 28 Emmys and won 8. McShane became a star, winning a Golden Globe Award for his indelible turn as the brutally pragmatic but undeniably charismatic Swearengen.

For a show with as much blood and action as Deadwood had, it’s genius was in its dialogue. Milch’s breakthrough approach was to give his western a baroque brilliance. Every character, no matter how much of a lowlife, spoke in a kind of deadbeat poetry. It didn’t matter if they were desperate gunslingers, drunks, prostitutes, murderers, lowlifes, or your average lunatic frontiersman—Milch gave them all something interesting to say, in a patois that became Milchian. Deadwood had arguably the greatest one-liners in all of TV. These zingers were often unleashed in complex monologues spoken in a flow English you could easily understand but couldn’t reliably speak. The cliché holds true for Deadwood; there was nothing else like it on TV.

The Deadwood film joins another movie based on an iconic early HBO series—the upcoming Sopranos prequel The Many Saints of Newark, which will be released in September 2020. These two shows helped change HBO into an original content powerhouse. Their return as films is giving hope to fans of another series that re-defined what HBO was—David Simon’s The Wire.