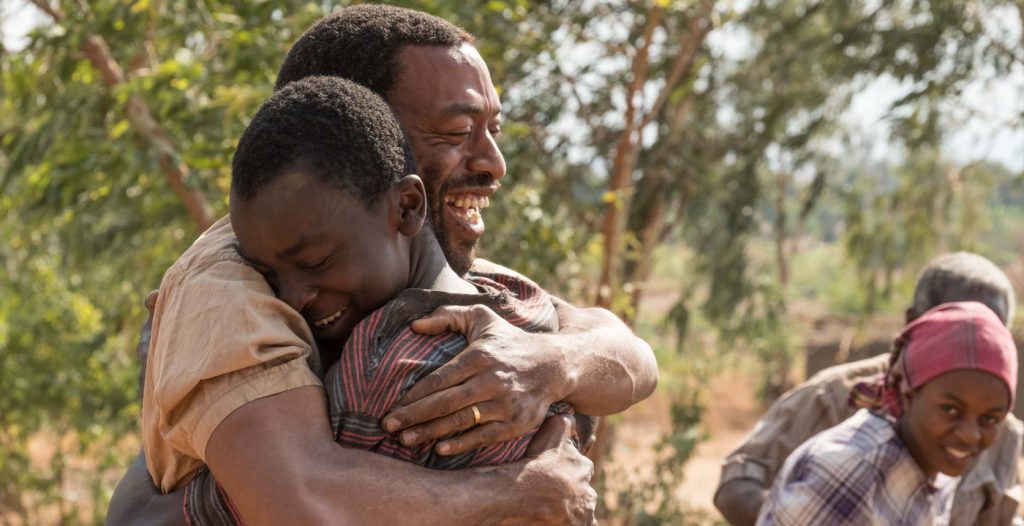 Today Netflix is releasing actor Chiwetel Ejiofor’s directorial debut, The Boy Who Harnessed the Wind. Based on the 2009 bestselling memoir, co-written by its subject, William Kamkwamba, and Bryan Mealer, the film depicts Kamkwamba’s teenaged years in Malawi during a famine, when he successfully built a windmill irrigation system based on an old library book and using parts from a scrapyard. Prior to its Netflix release, The Boy Who Harnessed the Wind premiered at Sundance in January and was screened at the Berlinale film festival.

The film tracks 14-year-old William (Maxwell Simba) for about a year of his life, beginning with his entry to secondary school. His family are farmers, and William is forced to leave school when a bad harvest means his father, Trywell (Chiwetel Ejiofor), can no longer afford the tuition.

Throughout this time, we see hints of William’s brilliance—he has a side business fixing old radios, he endears himself to an older group of boys when he devises a power fix for dead batteries, and his best friend seems content to rifle through the local junkyard with him, assured of William’s abilities to conjure up something useful from their scrapping. The film also touches on the bad business practices, corruption, and governmental incompetence that helped enable, and exacerbated, the famine that hit Malawi between 2001 and 2002, and which galvanized William to build his brainchild. Determined not to wait for the next planting season, he convinces his father to give him his bicycle, and using the wheel and part of the frame plus junkyard finds, William fashions a wind-powered water pump that successfully brings water to their fields (it’s not shown in the film, but prior to this accomplishment, William also built wind turbines to electrically power his parents’ home).

Kamkwamba earned international acclaim for his ingenuity, was invited to give a TED Talk, and went on to Dartmouth College (he is now an inventor and engineer). To recreate his life almost 20 years ago on screen, the production eventually made its way to Wimbe, the village where he grew up. “At first, we didn’t know which part of Malawi. I did four trips to Africa to visit different parts of the country,” Tulé Peake, the film’s production designer, says. Originally intending to shoot partly in a studio, the extensive Malawian scouting moved the team to film almost entirely on location. The Kamkwamba family home shown on screen is a house that belongs to William’s relatives, in the compound where he grew up. “It had the same shape, and let’s say, the same feeling, as William’s house when the story happened,” Peake says. “As a matter of fact, there are parts of the original windmill still standing there. So we had to avoid it because we had our own.”

Ejiofor’s inspirations included The Bicycle Thief, Vittorio De Sica’s 1948 Italian neorealism drama that depicts a father-son duo searching for a stolen bicycle in post-World War II poverty-stricken Italy. The feeling of The Boy Who Harnessed the Wind is neither that of a sensationalist news headline nor a feel-good fairytale. Even in its precariousness, Wimbe comes across as a normal if not particularly material-rich town, dealing with the vicissitudes of a farming-based economy, business practices that favor profits over environmental stability, and a government that does not rise to the occasion in the face of a preventable crisis.

The design team worked with a number of Kamkwamba’s relatives and former teachers to faithfully recreate the setting of his early stroke of brilliance, filming in William’s former school, for example, and painstakingly searching out the right terrain to recreate the junkyard from scratch. “Malawi doesn’t have a movie industry,” Peake says, and the production traded with local residents for many of the objects and furniture used in the film, as well as the characters’ wardrobes. “The funny part was convincing them of that logic: They could not understand why we would prefer old and broken used stuff instead of nice brand new furniture, fabrics, etc.”

Wimbe’s residents were hired to work on the set and elsewhere throughout the production. “My main local painter was also Chiwetel’s stand-in,” Peake laughs, “so we were always fighting for who would have him that day—the acting or the design.” But perhaps most faithful to William’s story, the production successfully recreated a functioning version of the then-teenager’s windmill. In a testament to his brilliance, they weren’t even sure they’d be able to: “In the beginning, I thought I would have to use a motor, and make a fake windmill so that we could control it,” Peake admits. Instead, the team did a number of experiments, replicating the exact process described in Kamkwamba’s memoir (including using pieces from the junkyard they’d created as a set). “And then it worked, incredibly enough,” says Peake. “I couldn’t believe it until I saw that it was turning.”

TAGSInterviews Netflix Production designer The Boy Who Harnessed The Wind