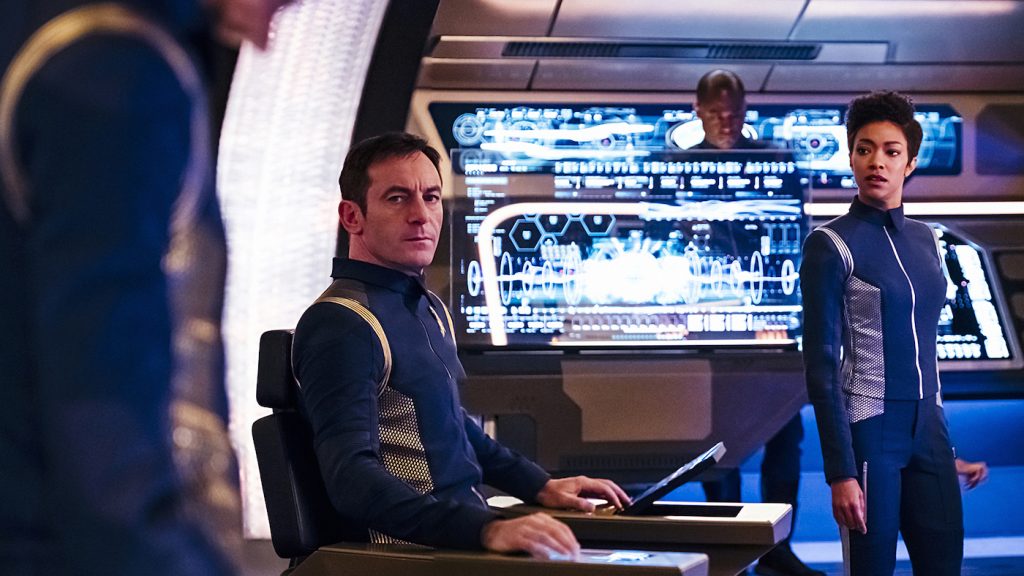 When Art Director Jody Clement stepped in to work on CBS’s Star Trek: Discovery, she was no stranger to ambitious sci-fi television series. She’d already worked on Guillermo del Toro’s deliciously creepy The Strain, as well as BBC America’s narratively complex Orphan Black. For Star Trek: Discovery, Clement was stepping into both a major new show and TV history simultaneously.

“We do our initial research based on canon, the history of Star Trek,” Clement says. “Our team looked at what the original series presented in the past and the resources we have in the present that we can use to enhance the story. We aimed to make something Gene Roddenberry would have wanted to do if he was here in 2019.”

Discovery is set ten years before Roddenberry’s legendary original Star Trek series and is on a separate timeline from the current crop of feature films. That means we’re watching what happened before the Captain Kirk era, during the Federation-Klingon war. This timeline presented challenges and opportunities for the show’s creative team.

“It’s a big collaboration,” Clement says. “We are creating images and rendering sketches and illustrations at the art department level, working with the writers and executives to make sure everyone feels we’ve got the right vision for the show.”

The story is focused on Sonequa Martin-Green’s Michael Burnham, a disgraced First Officer who ends being recruited to serve as a science specialist on the USS Discovery. Because the Discovery is operating in a Starfleet a decade older than the USS Enterprise’s, Clement and folks like set designer Emilie Poulin had to make sure the technology appeared slightly more dated than Roddenberry’s iconic mid-to-late 1960s series. At the same time, it couldn’t pull viewers out of the story by being too anachronistic.

“For the Discovery era, our communicators are flip-phone like, whereas the newer generation’s communicators are essentially the Star Trek logo on their chest above their heart,” Clement says. “They’d just tap that to talk. For us, we created a little handheld box that has a removable scanner about the size of a really thick paperback book. So if they’re trying to figure out where this alien rock came from, they scan it and they get information back on the computer screen.” A beloved story for Trekkies is how the inventors of the cell phone were reportedly inspired by Captain Kirk’s Communicator in the original series.

It wasn’t until episode three in the first season that we finally step aboard USS Discovery. This is because we have to watch a first in Star Trek‘s 51-year history; Martin Green’s First Officer Michael Burnham commits Starfleet’s first act of mutiny. As if that wasn’t enough, by the end of the second episode, she’s killed her mentor, Captain Georgiou (Michelle Yeoh). Clement says that while the Shenzou and Discovery are very different ships, it was necessary to double one for the other to keep costs down and turnaround time quick.

The corridors of the ships are also founts of crew creativity and Easter Eggs for viewers. Any Star Trek ship worth its alien salt will be filled with all sorts of interesting tubes and pipes and machinery, ostensibly crucial to the crew’s safety and the proper functioning of their vessel. These tubes have long been a staple of Star Trek inside-jokes, too.

“In our corridor hub, in the four corners you see a lot of tubes and all the interesting mechanics of the ship,” Clement says. “It’s all visible to the crew and the audience, and one of the little Easter eggs for the fans is you’ll see the letters GNDN on the pipes. This is a nod to the original series—the letters stand for Goes Nowhere and Does Nothing.”

Despite the fact that the show is set in the future, in the midst of an intergalactic war, on a spaceship trawling the universe for intelligent life, some of the technology on the sets are made of comically mundane household items.

“I actually give new actors a tour of the set officially when they’d start on the show for the first time. Part of that tour is the transporter room on the Discovery, which has a lot of those little tubes and pipes behind glass on the floor,” Clement says. “One of my favorite things is we have all kinds of little plastic pieces and tubes and clear domes down there, and the clear domes are actually clear plastic salad bowls turned upside down, and the little tripod style arms you see are actually made from windshield snow scrapers from our local Canadian supplier.”

This doesn’t mean the USS Discovery is made up of entirely dated technology and things you eat salad out of. In fact, the monitors you see in the show are cutting-edge—and no longer even made.

“Prep for season one started in 2016, and they were researching all of the best monitor technology,” Clement says. “We found these amazing, ultra-wide screens called planars—they actually don’t make them anymore because they’re very expensive. They slightly bend along with the curve of the bridge. They display interactive data, and a lot of people will think that when you see a character interacting with a monitor that it was added in post-production, but what you’re seeing on those monitors is real. So when you see an actor standing behind one of those monitors with a graphic on the screen, those graphics are real and the actors can interact with it.”

On February 9, Clement will join eight other Star Trek: Discovery artists for a Q&A about their work hosted by the Directors Guild of Canada Ontario. These are the folks responsible for turning Toronto into whatever world the Discovery crew finds themselves on next. Clement clearly loves her job, and she shares the joy of creating spaceships and alien worlds with the rest of the crew.

“Our set decorating department is pretty awesome, they’re not the typical set decorators that go out and buy curtains and furniture; they actually have to build most of the items that you see on the show,” she says. “We have a construction department that builds the set. You can’t just go and buy a part of a spaceship; you have to actually manufacture them. So they’ll buy a vacuum, then take it apart and re-build it as something that fits into the show. On one of our sets, there are vegetable steamers in the walls. I could go on and on about all the little things that we do. We have a happy crew because they get to do actually do things.”

Star Trek: Discovery is available to stream now on CBS All Access.