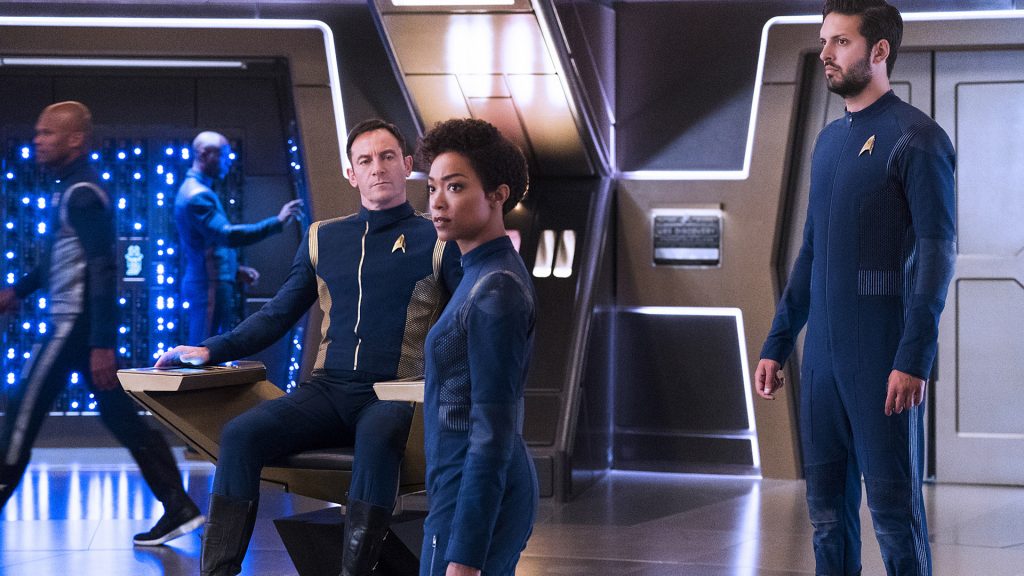 Since 1966, Star Trek has been boldly going where no one has gone before. Through dozens of planets and vast reaches of space, the series has explored the most wonderful and most fearsome places the universe has to offer. Set designer Emilie Poulin is charting the Starfleet’s newest adventures on Star Trek: Discovery.

The locations on Star Trek: Discovery are very active. Because the storylines are rooted in exploration, the characters are interacting directly with their environments. The scripts challenge Poulin and her team to find solutions that will serve the function of the scenes but also allow camera crews to move freely.

“There is a thing called a ‘wild wall’ or being able to remove portions of the set so that the camera can get in,” she explained. “If that portion of the set being removed eliminates the structure of the set then you have to hang things from the ceiling. Nothing is flat in Star Trek. That was one my first big discovery. The walls do not go up and down.”

One of the most dynamic sets Poulin designed was the Discovery engineering bay. The space, which is still being used is season two, has already been adapted more than ten times for different script needs with walls being removed and portions extended. The set also had to be designed before the final script of the season was even finished meaning additional changes had to be made to modify for developing plot points after it was built.

“The wall where [Lieutenant Stamets] puts the mushroom, the mycelium pods – that whole wall was a giant removable wall that became another thing, but we didn’t know that part of the script when we designed the set, so we had to leave it pretty simple then design it later,” Poulin revealed.

Building sets poses hefty challenges, but contending with nature may be even more difficult. This season of Star Trek: Discovery features Saru’s (Doug Jones) homeworld of Kaminar. The Kelpien planet was introduced in Short Trek episode “The Brightest Star.” Eagle-eyed Toronto natives may recognize the site.

“There’s a place in Toronto called the Scarborough Bluff and it’s just a bunch of bluffs and beaches,” Poulin said. “I had a friend come with a drone and aerial map the whole place and try to figure out square footage and how many kilometers between this and this and how can we build and at this time of the year how high is the water. That was really challenging.”

Kaminar was a brand-new world that Poulin and her team were able to design freely. The original location was limited by nothing but imagination.

“Because we have never seen the Kelpien world before, we were free of canon. We got to be pretty vast in our gathering of inspiration,” Poulin said. “I made the decision not to look at any ‘alien world’ precedents, and tap into my days of playing in the dirt. My reference image library was composed mostly of armadillo and turtle shells, deep sea creatures, bioluminescent algae, and African mud huts.”

Saru’s homeworld is also a direct reflection of his people. The diversity among Star Trek has been infused with imaginative makeup and character design that inspired how Poulin interpreted the Kelpien worldview.

“The structure we designed was a pair of 18 sided elliptical huts,” she says. “So, if you imagine 18 slices of 3-dimensional pie curving up to a circular peak. For the pattern of the facade, I took inspiration from Saru’s face. I loosely traced the geometry of his cheekbones, philtrum, and brow and then developed a series of iterations with them – extruded, stretched, and mirrored the linework until I came to a form that felt original and exuded the essence of the Kelpien race.”

The world needed to reflect not only a Kelpien aesthetic but also the way in which they would interact with nature. The way they lived had to be feasible for their level of advancement, physical abilities, and available supplies.

“We had to think about how the Kelpiens would have realistically built the huts themselves,” Poulin noted. “For our purposes, we needed to design a very detailed steel structure, with removable walls for the camera, spaces within the walls for electric requirements. But to uphold the story, it needed to appear as though the characters had constructed the huts themselves out of indigenous materials such as mud, algae, sticks, and plant matter.”

Star Trek has not only been at the forefront of exploration but also technology. The inventors of the cell phone were reportedly inspired by Captain Kirk’s Communicator. Now that real-world capabilities have caught up to the series, the creative team can utilize new techniques to build the worlds we see on screen.

“The craft of set design has evolved just as much as the Star Trek Universe,” Poulin said. “We now use a multitude of computer software to generate 3D models and blueprints. We have access to virtual reality to immerse ourselves in the space before construction ever begins.” Poulin and her team utilize technologies that didn’t exist when Star Trek first took flight including 3D printers, virtual 3D modeling, and laser cutting machines. “In as much as we seek to honor the previous styles, we’re also a bunch of creatives who like tinkering with new toys. Inevitably, all these new technologies we hone our craft through affect the look and feel of the sets.”

Throughout the many Star Trek TV episodes and movies, a daring and inspiring aesthetic has endured. Although Discovery explores new untapped realms, Poulin did her research to make sure that her designs made sense within the franchise. She estimates that binging all of the Star Trek content ever created would take more than 550 hours, but she was still able to internalize the heart of the stories.

“What I learned from this exercise was a really intimate connection to the characters and an appreciation for the Star Trek philosophy,” Poulin said. “Just the groundbreaking choices they have made and are loved for. Usually, when I am watching something for the first time, I am not paying attention to the design and just trying to absorb it and then I’ll watch again. I got the aesthetics and the geometry and the color palettes, but I think what I really got was the soul of the franchise and that gave me the confidence to come on board with my own vision and trust my instincts.”

On February 9, Poulin will join eight other Star Trek: Discovery artists for a Q&A about their work hosted by the Directors Guild of Canada Ontario. Thanks to the creativity of Poulin and the rest of the team, Toronto can be transformed into any place in the universe they can dream of.

“The great thing about Toronto is it doesn’t have a distinct architectural style, so it is really easy to manipulate to look like other cities around the world,” Poulin said. “It also has a huge infrastructure of people who support the film industry. Toronto is growing and they’re building new studios everywhere. It’s a really exciting time to be here because they’ve invested in us.”

Star Trek: Discovery is available to stream now on CBS All Access.