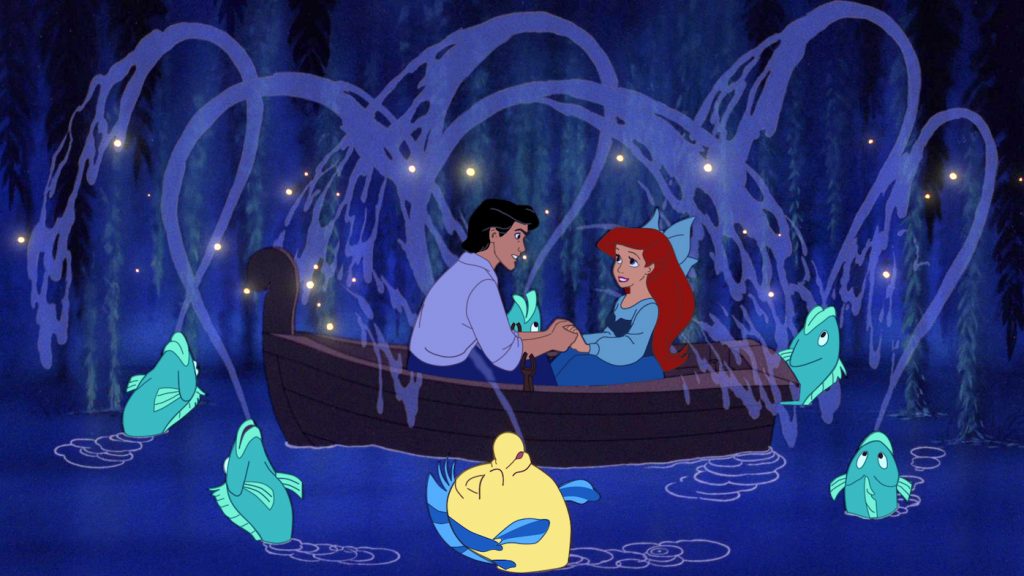 Thirty years ago, The Little Mermaid initiated the second golden age of Disney animated features, with a spectacular score, including what star Jodi Benson calls the “I dream” opening number that introduces us to the title character, “Part of Your World.” The young mermaid princess sings about wanting to explore the human world. “I want to be where the people are/I want to see/want to see ’em dancin’/Walkin’ around on those/(Whad’ya call ’em?) oh – feet.”

Jodi Benson’s sweet voice brought Ariel to life, and she has continued to play Ariel in the theme park attractions and video games, and last year’s hilarious Disney Princess scene in 2018’s Ralph Breaks the Internet. Today marks the release of the 30th anniversary DVD/Blu-Ray. In an interview with The Credits, Benson talked about making the original film, playing Barbie in the Toy Story films, and how she was selected for the part she never imagined she would be playing for three decades.

How do you project that wonderful quality of innocence that Ariel has, where everything is so new to her?

The most important thing is to be an authentic actress. I need to live, eat and breathe the actual scene and believe that that is happening. When I get behind the mic and starting to create those scenes with [producer/lyricist] Howard Ashman and Ron Clements and John Musker as our directors, they just said, “Get yourself in that place and believe it that this really is happening. You need to convey the reality of the situation as opposed to being an actress reading a script.” So attacking it as if it were a Broadway show and just internalizing it and becoming that character is so important in order to make that very believable.”

Not really. I had some sketches from the animators, from Glen Keane, but basically, it’s imagination; you’ve got Ron and John and you’ve got Howard describing the script page by page to me and reading the other characters. We did do a table read with the whole cast and the first day and a half we recorded simultaneously so that we could get the relationships and chemistry and then on the third day we separated and went individually. But then I had Howard in the booth in the studio with me playing all the other parts. He was just so brilliant and he could play all the parts better than we could!  So he was just really helpful.

What makes Ariel’s song so special?

It is such a beautiful song and it’s a story song, which I love. It’s a monologue that happens to be put to music that was brilliantly written by Howard and Alan Menken; I love the lyrics. It’s a classic “I want” song like the ones at the beginning of a Broadway show.  There has to be an “I want” song so that you root for that character all the way through the movie or the musical so that you can cheer them on to victory at the end. It’s such a beautiful song and I’m so grateful to get to sing it.

Of all the Disney princesses, the voice is the most important for Ariel, a key to the storyline. It really defines her and the risk of losing her voice forever is the stakes of the story. What was it about your voice that made you right for the part?

I’ve asked Ron and John and had asked Howard this as well before he passed away—why did you pick my tape? Because this was reel-to-reel back in 1985, and they sent these tapes without pictures and resumés or names attached to them. Ron and John would say, “We didn’t know what we wanted until we heard it and when we heard it, that’s what we wanted.” I think it was just a matter of them listening to several hundred tapes and figuring out that when they heard my voice they felt like it brought Ariel. And the animator, Glen, would make pencil sketches in the studio while I was recording, and watch videotapes of me singing.  He would say it’s the voice that brings the character to life. He said as soon as he could hear that voice and start to connect the dots then his sketching would become very real.

You also did the voice of Barbie in the Toy Story movies. How is performing that voice different from Ariel?

I don’t change my character’s voices; I just change characters. I’m not thinking about the logistics of switching my voice or making it higher or making it lower. I just envision the character. I have to get a picture in my mind of what she looks like. With Barbie, I didn’t actually audition for that. I just got a call from Pixar saying, “We’d like you to come in and portray this role,” and I was like, “What, really?” They said, “Yes, it’s not Ariel but we know that Barbie is inside of you.” So I went the first day and we pulled out a bunch of Barbies and we played with them at the microphone with our director. We started to create the character. So it’s not something I really think of as far as the logistics of technically changing my voice. I try to just attack it more as an actress for a character and then the voice just follows.

It must have been fun to be in a scene with all of the other Disney princesses in Ralph Breaks the Internet.

I love the concept that they took our princesses out of their elements where you normally see them and experience them. Putting them all together and letting them have a real life and see what they’re like behind the scenes. It’s tons of fun to get to have a blast with these princesses. They have such a playful interaction with each other. I absolutely love those scenes.