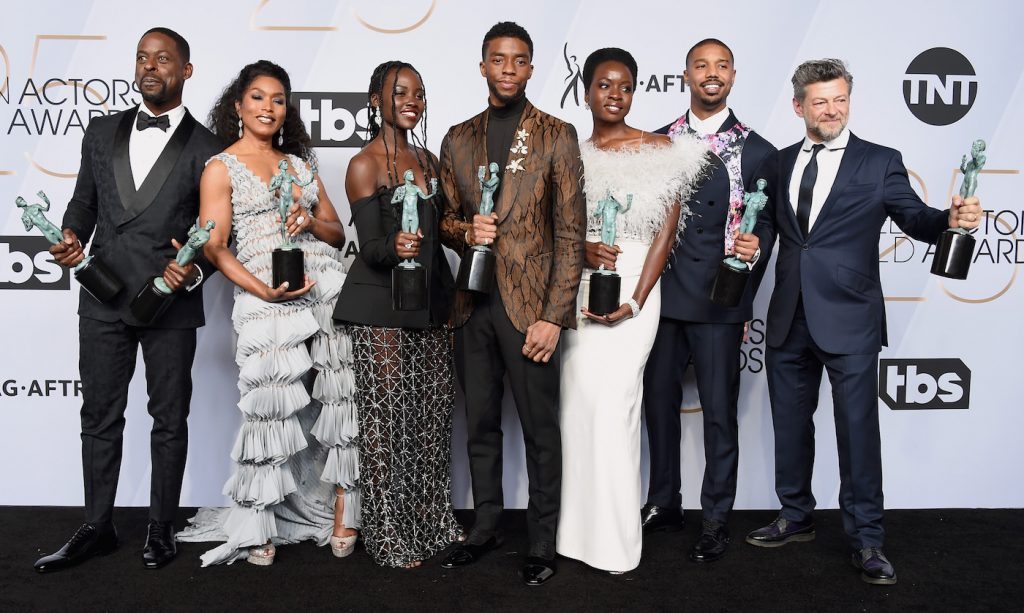 The Black Panther Cast Talk About the Sequel

Black Panther‘s cast came up big at last night’s SAG Awards. The ensemble took home the top prize for Outstanding Performance by a Cast in a Motion Picture, and after the show, they had plenty to say about their writer/director Ryan Coogler and the upcoming sequel.

“Sequels, I think, are one of the hardest films to make,” Michael B. Jordan said (no stranger to sequels himself, with Creed 2 dropping late last year). “I feel like to create a world and build upon it that’s so beautifully and delicately woven into the world of the Marvel Universe — but throughout cinema in general, you take Marvel out of it, I think it’s a movie that stands against all film across the board. It’s one of those things where honestly, to be able to build on that legacy and those characters and the world that Ryan built — you know, Stan Lee and Jack Kirby created years ago — but allow Ryan to actually tell that story, if there’s an opportunity to come back and do a second one…I mean, take myself out of that situation [laughs], but for everybody to come back, I think I speak for everybody up here, it would be a tremendous accomplishment.”

While Jordan’s Erik Killmonger, the film’s villain, won’t be returning for the sequel, the actor was not alone in his enthusiasm for Coogler’s abilities and what’s to come. The man who played his father agreed.

“He doesn’t lose, you know what I’m saying?” said Sterling Brown, who played N’Jobu, a crucial character in the film. “Bruh is three-for-three, he’s gonna be four-for-four, and the Marvel team gave him all the support that they needed with [Marvel Studios president] Kevin Feige… he’s a beast, man. He ain’t going to slip. Godfather II. Like, be ready.”

The #BlackPanther cast is confident the sequel will live up to the first film because of Ryan Coogler https://t.co/MUbuvsYR4q #SAGAwards pic.twitter.com/iLbPGWJK71

The cast has every reason to feel confident in their leader; all Coogler did was take on a major, stand-alone Marvel film and turn it into one of the most critically and commercially successful films in Marvel’s massively successful history. Black Panther also just became the first superhero film ever nominated in the Best Picture category. Costume designer Ruth E. Carter and production designer Hannah Beachler were both nominated for their work, with the movie nabbing seven nominations in total.